Cole Hamels (Oblique) to Get MRI Today, is Hopeful it Isn't a Significant Strain Skip to content 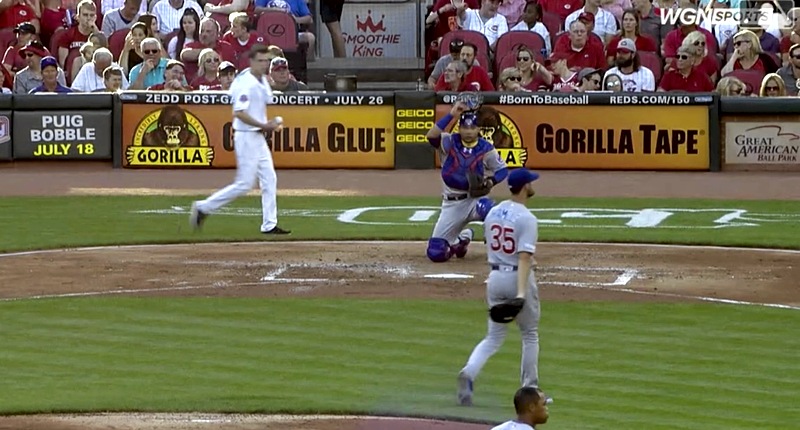 When Cole Hamels departed last night after throwing just two warm-up pitches before the start of the second inning – without even waiting for the trainer – you knew it wasn’t going to be anything good. A veteran starter like Hamels is only doing that if he knows he’s hurt.

And he did know. You could see it on the first throw – him thinking, hmm, that didn’t feel right – and then trying one more throw just to confirm:

As Hamels would later explain, he felt what he thought was a cramp on his left side during the first inning, but he was able to get through (Cubs.com). He did some stretches between innings, and came out for the second, but the “grabbing” sensation was still there, and he didn’t want to injure himself worse.

He’ll get an MRI today to determine the extent of the injury.

If you want a little hope to cling to right now, know that Hamels strained his right oblique in 2017 – an injury that cost him two months and mucked up his mechanics – and he does not see this as quite the same thing. That one, he said, feels like you got shot.

Still, Hamels is going to be overly cautious in his return, as he should be, after a bad experience last time:

Hamels said he won't rush things like he did 2 years ago when he injured an oblique. Came back about a week early. Won't make that mistake again.

I suppose the other bits of positivity you could take away is that (1) Hamels is 35 and now his arm gets a long midseason break from throwing, and (2) the All-Star break is coming and that will be a stretch when Hamels would have been sitting anyway.

Now we just wait for the MRI results and the plan going forward. Realistically, it’s almost impossible to imagine Hamels missing less than a month with an oblique injury of even a mild severity, but I suppose we’ll see what’s what.

Roster-wise, the Cubs will bring up a couple pitchers today (one for Hamels, and one for Carlos Gonzalez), and it’ll probably be a couple true reliever types already on the 40-man like Rowan Wick and Dillon Maples. Once things are settled on the pitching side, the Cubs can swap out for a position player, and also figure out how they want to cover Hamels’ next start in Pittsburgh on Wednesday. Adbert Alzolay is already scheduled to start in that series, so it may be that Tyler Chatwood fills in, though he’d have gone over a week between starts by then.