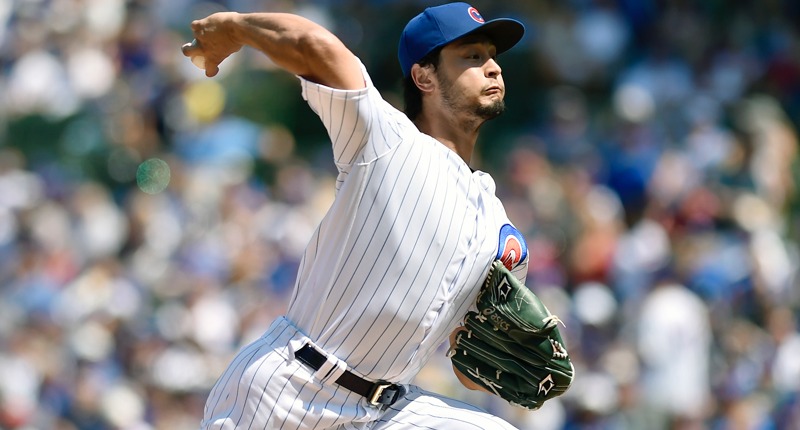 If you just woke up from a season-long nap, rushed over to FanGraphs, and checked the 2019 ERA leaderboards, it probably felt like an eternity before you finally scrolled past “Yu Darvish” (4.36 ERA, 50th). But any such disappointment would be wildly misplaced.

After losing essentially all of 2018 to multiple arm injuries (immediately after a massive $126M deal) and getting off to a slow start here in 2019, Yu Darvish is putting together an above-average season by ERA. And that, alone is worth celebrating – especially when it’s been over 23 healthy starts and 126.0 IP here in early August.

But there’s a reason Joe Maddon said “he’s pitching as well as anybody in the league right now,” and it’s not because of a just-barely-better-than-average ERA. That might help to tell the broader story for those who remember how poorly March and April went, but there’s some very specific dominance built in there. For example …

At the beginning of the season, Darvish may have had more than one problem, but his biggest – by far – was a complete lack of command. In his eight starts from March 30th in Texas to May 9th at home against the Marlins, Darvish walked a massive 33 batters in 36.2 IP. That was good for a (2018-)Tyler Chatwoodian 19.3%. By far the worst in baseball at that time.

Since then, Darvish has made 15 starts (89.1 IP), but has walked only 18 batters total. That’s almost half as many free passes in more than twice as many innings … good for a 5% walk rate! I mean … come on! This chart is insane: 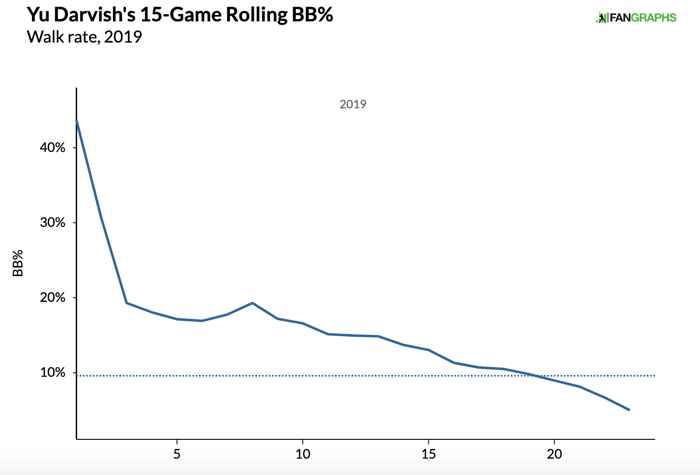 Over that same first ugly stretch (3/30-5/09), Darvish has a zone-rate of just 39.9% and a first-pitch strike rate of just 52.6%. In the time since, his zone-rate is all the way up to 45.9% and his first-pitch strike rate is 65.0%. And there’s been a bit of compounding success, behind-the-scenes, as well. With more strikes in the zone, especially early on in the count (as we just laid out), batters are starting to stretch WAY more than they were at the beginning of the season:

So basically, Darvish is not only throwing more pitches in the zone for strikes, he’s ALSO getting helped out on non-strikes by more swings on the balls that miss. And given that his O-contact rate the most recent stretch of games (61.8%) is WAY lower than his o-contact rate in the first period (69.9%), that’s success stacked on success.

This is a complete and dramatic overhaul in his results. Darvish was already doing some stuff well on the margins, and then he absolutely obliterated his biggest question mark in prolonged, consistent, sustainable ways. Specifically, Darvish’s fastball command went from completely non-existent – so bad that he simply could not trust the pitch, and even experimented with making a two-seamer his primary fastball – to superlative. He is throwing the pitch with complete confidence and conviction.

And that leads us right into the “pitching as well as anybody” stuff.

Since the All-Star break, Darvish has turned the command up to 11. Over 5 starts and 29.0 IP, he has given out just 2 free passes, which is the fewest in baseball. He’s also struck out 38 batters during that stretch, while allowing just 21 hits and 3 earned runs. Put more familiarly: Yu Darvish has a 2.17 ERA, 2.46 FIP, 33.9% strikeout rate (9th) and 1.8% walk rate (1st) while batters are hitting just .196 off him over his last five starts! YUUUUUUUUUU!

Had he posted those numbers over the entire 2019 season, that ERA, FIP and walk-rate would rank among the top-30, the strikeout rate would be roughly top-10, and the batting average against would be roughly top-5. That’s a very long time to be effectively as good as almost any pitcher in baseball – so, yeah, I think Joe Maddon was onto something.

And you know what, I think the Wrigley faithful are recognizing this dominance, too:

Darvish strikes out Grandal to end the threat in the 5th, and leaves to a loud “YUUUUUUUUUU” from the Wrigley faithful! pic.twitter.com/IXBNyCOxsZ

We’ll see if he can keep this up the rest of the way, but right now, Darvish looks good, feels good, and is doing everything you’d want to see from him from the mound.