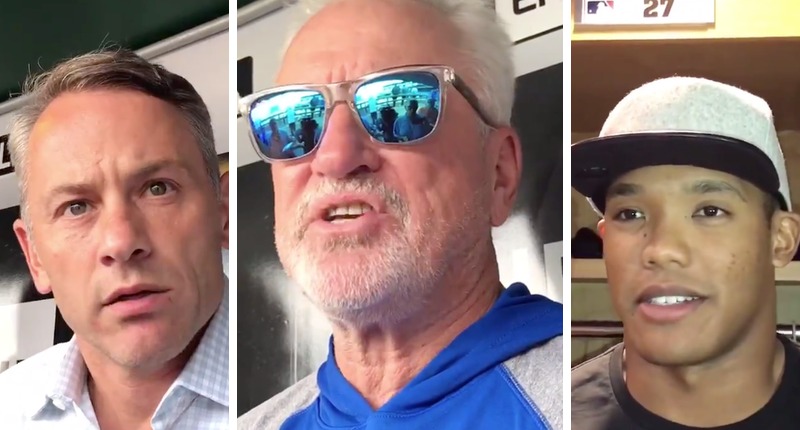 Earlier today, the Chicago Cubs made a series of roster moves involving four total players, but the two names sure to catch your eye were undoubtedly Addison Russell and Albert Almora Jr.

The latter was sent to Triple-A Iowa after failing to do much of anything offensively over the last calendar year (or longer). The former is Addison Russell. I think we all know his story by now. If you’d like more from us on this half of today’s transactions, check out Brett’s article here.

In the meantime, both the GM, Jed Hoyer, and Cubs Manger, Joe Maddon, addressed the media, discussing the position player swap, what went into it, and what they’re hoping to accomplish.

In short, the Cubs felt the demotion would be the best thing both for Almora and the the team itself, especially now that they’re “covered in the outfield,” as Maddon puts it.

And, indeed, with all three of the nominal starting outfielders hitting well at the moment (Jason Heyward, Nicholas Castellanos, and Kyle Schwarber) plus the addition of Ian Happ, who’s also swinging a hot bat (and is a far better outfielder than infielder), Almora did become a bit superfluous. In effect, given how bad the offensive output was, Almora was nothing more than a defensive replacement … and even that part of his game hasn’t looked quite as strong as usual this season.

Joe Maddon also pointed out that Almora’s supposed strength against left-handed pitching hasn’t been there all year, which really neutralizes any use offensively.

He’ll be back in September, when rosters expand.

Here’s a little bit more from Joe, which is identified as comments on Russell’s return, but actually sounds more like a discussion about Almora’s demotion and how it can be easier to process when they more or less know they’ll be back in a few weeks (again, when rosters expand in September):

According to multiple sources on Twitter, now, the Cubs apparently had the Almora/Russell swap planned before yesterday’s game.

Here’s Russell discussing his time in Triple-A and the benefits of playing on a more consistent basis:

Russell: “I felt I got back to the original me” pic.twitter.com/Pd7rpdO1us

Russell also added that he was “on a mission,” in Iowa and admitted that he was devastated after getting demoted back in July. All together, Russell played in 27 Triple-A games (119 PAs) with a 123 wRC+. He had been especially hot over his last 45 plate appearances, when he slashed .333/.400/.722 (150 wRC+). Let’s just hope he’s learned all the signs this time.

And finally, here’s Cubs General Manager Jed Hoyer discussing the team, in general, and the juxtaposition of a terrible road record … and a first-place team:

Some candid words from Hoyer: pic.twitter.com/rheRFL4116