We’ve already more or less been Scoreboard Watching since June, but I haven’t given it the official launch. With about one month left in the regular season, it feels like a fair time to do this more regularly and more official-like.

Last night, the Brewers blew it again to the Cardinals, marking their fourth loss specifically against the Cardinals in their last eight games. It no doubt bugs me that they aren’t doing better against the team the Cubs are chasing in the NL Central, but it’s a fair reminder that the Brewers are also killing themselves:

If the Brewers had won, say, three of those four they have lost to the Cardinals? They’d be just a half-game behind the Cardinals right now. Those head-to-head match-ups, man. They move the needle.

Elsewhere in the National League, the Cubs’ win over the Mets created some breathing room in the Wild Card race (I know, I know, not your preference (or mine)), particularly when coupled with a Phillies loss: 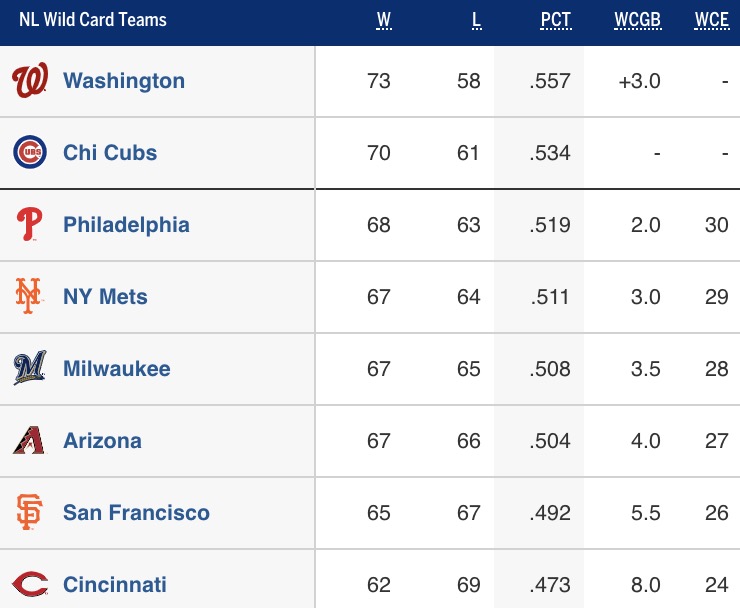 The Cubs have that breathing room, but thanks to so many teams still being around .500, there are plenty of clubs that could get hot and go on a run. I’m not convinced that, if they continue to middle around, the Cubs still don’t have a better shot at the Central than the Wild Card. And I definitely don’t think the Cubs have a better shot to take the top Wild Card spot (3.0 back of the Nationals) than the Central (3.0 back of the Cardinals).

The Cardinals wrap up their series with the Brewers this afternoon (Flaherty versus Lyles … yikes), before an off-day tomorrow. Then they host the Reds for four games in three days.