The Decade in Chicago Cubs, By the Numbers | Bleacher Nation Skip to content

We reached the end of the year, as well as the end of a decade. And depending on what happens the rest of this offseason, we might even see the end of a particular era of Cubs baseball. All of which makes it the perfect time to look back on the last ten seasons (2010-2019) for the best, the worst, and the oh-that-actually-just-sounds-right.

Let’s start with the best and worst (1) position player (min. 300 PAs), (2) starting pitcher (min. 100 IP), and (3) reliever (min. 40 IP) on a single-season basis. We’re gonna keep this simple and just use fWAR – I know it’s not perfect (especially for pitchers), but neither are we. This isn’t a deep dive for analytical purposes. It’s mostly just a fun stroll down memory lane … 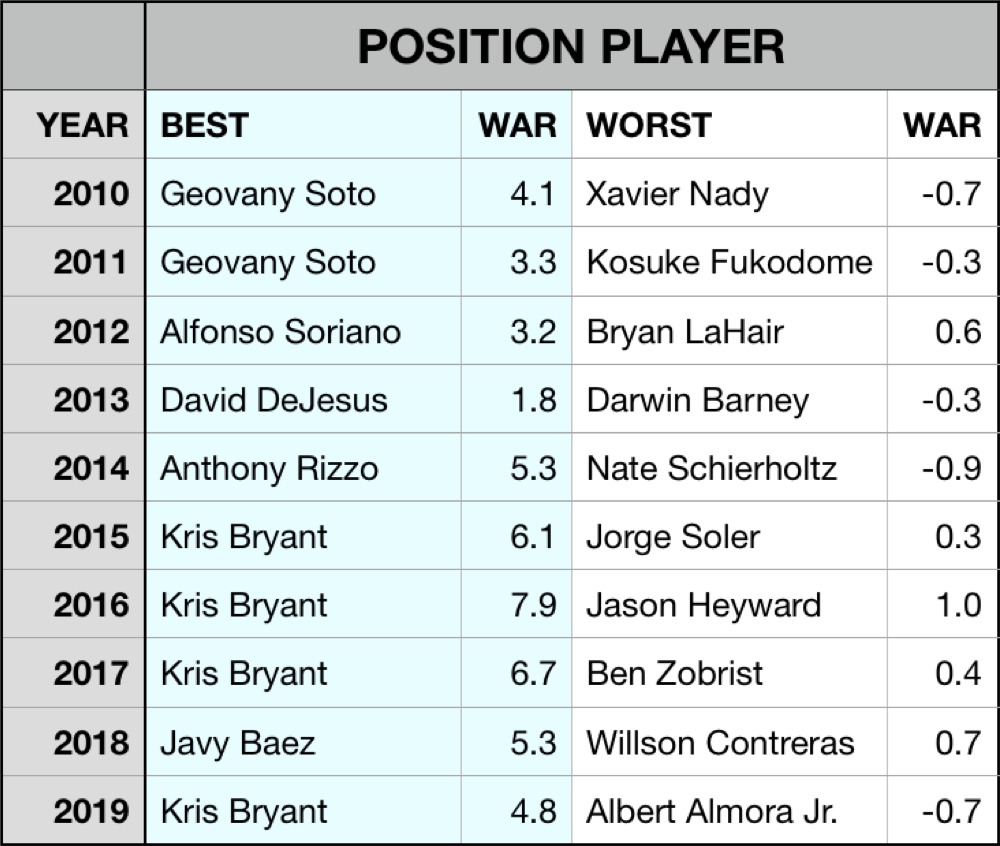 There’s a lot here to unpack, but I think this table actually does a good job of representing each season/era. There’s the pre-Theo time (2010-2011), when Geovany Soto and Starlin Castro were the Cubs best young players. There was the beginning of the rebuild (2012-2014), which includes Epstein’s first free agent signing, David Dejesus, as the team’s best player, and the debut of Anthony Rizzo.

And then there’s the competitive window, which has been defined – on the positional side – by two core players: Kris Bryant (4) and Javy Baez (1). Obviously, Rizzo deserves some love there too (we’ll circle back to him), but there’s really no arguing that on a single-season basis Bryant has basically always been the Cubs best player except for the one season Baez went off.

On the negative side, there’s the fall of the Kosuke Fukudome (he was pretty good before that!), the all-too funny trio of LaHair–Barney–Schierholtz, Jorge Soler‘s streaky debut, Jason Heyward‘s horrible first season with the Cubs, Ben Zobrist‘s one bad, injury-filled season in Chicago, and Albert Almora‘s offensive-less 2019.

If Willson Contreras‘ 2018 season is sticking out like a sore thumb, note that FanGraphs recently updated their WAR metric to include framing, which dinged him quite a bit that year (it was also his worst offensive season (still league average, though)). 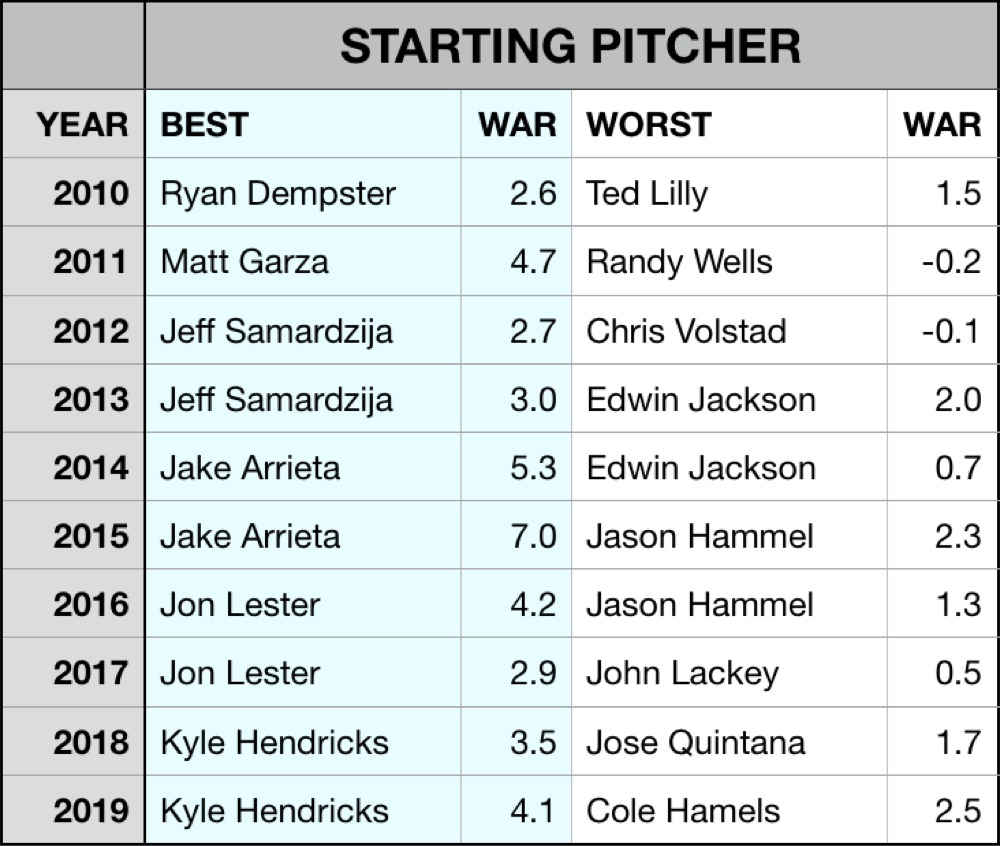 Although pitcher WAR at FanGraphs is an imperfect proxy, I think it kinda nailed this decade of Cubs starting pitchers, right?

Which brings me to the negative side of the ledger, where fWAR fails us a little bit. Sure, there’s some rightness (Edwin Jackson as the team’s worst pitcher in 2013 and 2014), but Jason Hammel was about as good of a fifth starter as you can ask for (and was part of that really important trade with Samardzija). And how about Cole Hamels in 2019? Was he technically the starting pitcher with the lowest WAR? Yes. But 2.5 WAR is better than average, he was dominant in the first half, and that’s almost as much as Ryan Dempster (2.6 WAR) who was the Cubs best starter in 2010. So … grains of salt.

Also: Chris Volstad. Remember him? That is all. 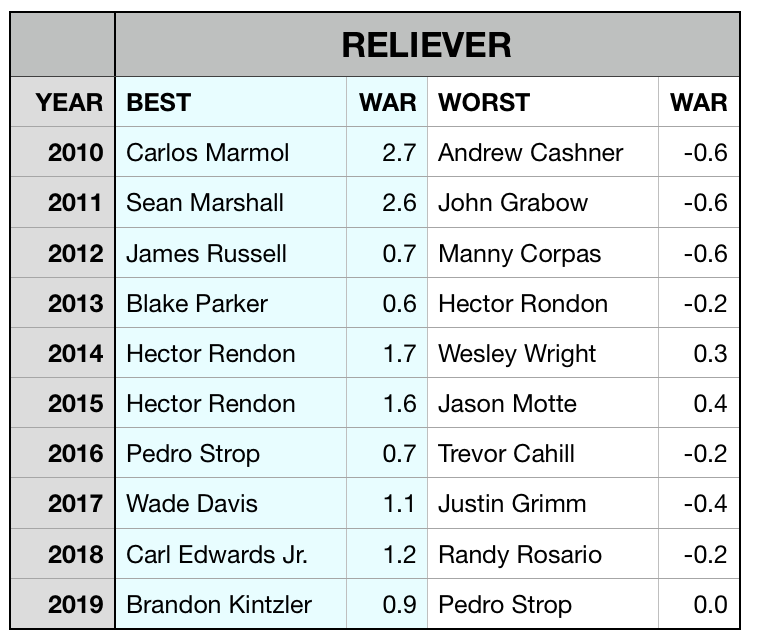 I have exactly no thoughts on James Russell and Blake Parker being the best Cubs relievers in 2012 and 2013 (those early years of the rebuild, man …) but how funny is it that Brandon Kintzler was the Cubs best reliever last season. I’m not saying he didn’t earn it – he did (2.68 ERA over 57.0 IP)! – but who would’ve seen that coming after 2018?

Lastly: the Cubs traded their worst reliever of 2010 (Andrew Cashner) for their best player of 2014 (Rizzo). That’s fun!

The Cubs have had just four players hit over .300 this decade … what the hell.

The top ten spots are taking by the players you see above. Baez-Rizzo-Bryant-Schwarber are the Cubs single-season slugging champs of the decade.

Rizzo takes the sixth spot on the rankings (141 wRC+ in 2019), followed by Bryant twice (136 wRC+ and 135 wRC+ in 2015 and 2019). Obviously, Bryzzo has defined offense in Chicago for the last decade. And how about Rizzo with the single best offensive season by any Cub? This stat, wRC+, is adjusted for the league and park factors, so, yeah, Rizzo is the king.

Arrieta’s Cy Young season, Hendricks and Lester’s Cy Young runner-up seasons, Travis Wood 2013 = Jake Arrieta 2016. Did I get it all?

Now, let’s do some decade totals.

No surprises here, Contreras (67) and Castro (62) are well behind, but next on the list.

This is … a sobering list. At least Rizzo, Bryant, and Baez are on top.

Okay, and to wrap this up, here’s a few random bullets about the decade:

And the only stat of the decade that matters at all: 1 World Series Title.