Yu Darvish Dramatically Improved the Usage and Success of His Splitter and Curve ... and the Fastball is Next Skip to content 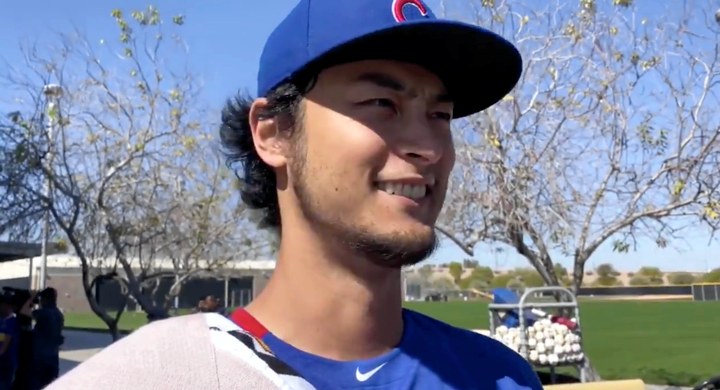 I was gonna write about how Darvish dramatically increased the use of his curveball in the second half after picking up a knuckle curve from Craig Kimbrel, and how that corresponded with a sharp increase in the whiff rate against his curve.

I was gonna pull a little shock-a-roo, and say how the same thing had ALSO happened with his split-finger changeup in the second half (after a grip change), another uptick in usage that corresponded with a huge increase in his whiff rate on the pitch.

And I was gonna be all, no wonder his K and BB rates did this hilarious thing last year: 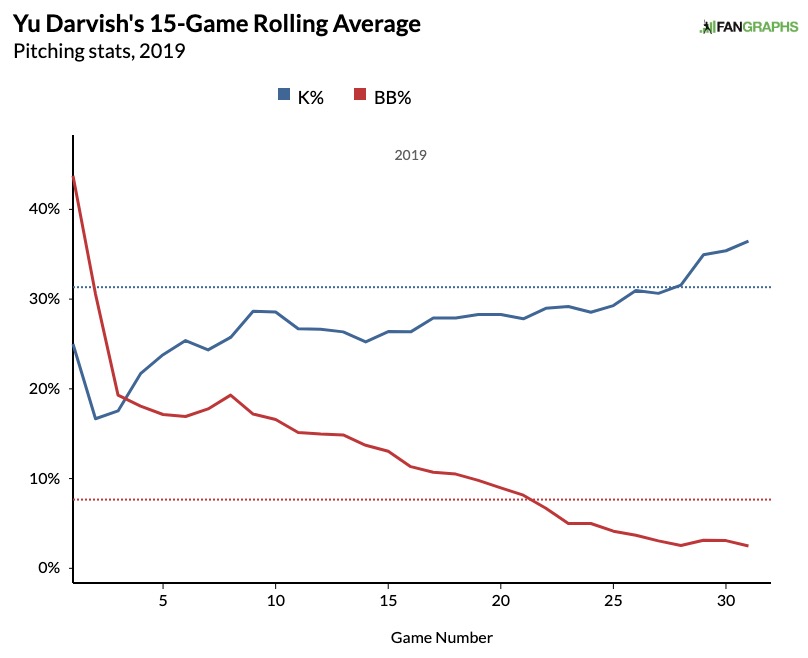 And obviously all that stuff is good and true. Yu Darvish has an insane volume of pitches, including three versions of a nasty slider … but in the second half he dramatically ramped up his usages and whiffs on the changeup and the curveball. That’s great. Worthy of noting.

But Sahadev Sharma kinda blew up my spot this morning with an even more eye-opening reveal: Darvish could be getting dramatically better with his fastball.

Despite a brilliant second half, Yu Darvish took it upon himself to figure out what weaknesses he still had. He focused on his four-seamer and looked at the best of the best: Gerrit Cole and Justin Verlander. A look at how Darvish rebuilt his fastball: https://t.co/sVeEuHk1iC

In his spring debut, Darvish was pump 97+ out of the gate and getting an absurd volume of swings and misses. It might not have stood out for the spring but for the fact that, as Sharma had previously noted, Darvish was already getting whiffs over 40% of the time in the second half last year on his four-seamer. He had never before been over 40% on the four-seamer for a full month, and he did it in both August and September last year.

That is to say, things were already looking up on the fastball last year around the same time as the curveball and splitter (it turns out, everything clicked around the same time with him feeling physically and mentally good, and also the way he could use the team’s data systems to actually apply on the field).

But now things could be EVEN BETTER on the fastball after Darvish studied the way two of the best – Cole and Verlander – maximize their spin efficiency. They were near the top of the league, which means they got the most “rise” on their four-seam fastball, especially since they also have very high spin rates. Darvish’s spin rate was also huge, but his efficiency was way, way down on the list. That means his four-seamer would not feature that rising action, which may have contributed to lefties too frequently hammering his fastball.

It may not sound like much – getting a little more success out of one pitch against the less-frequent platoon side – but consider that lefties hit a whopping .355 with a .742 SLG against his four-seamer last year. Consider then that he showed a huge platoon split overall for the season (.243/.301/.465 against lefties, but .181/.266/.352 against righties), and consider further that he actually faced *more* lefties (375) than righties (356). Improving in a big way against lefties, then, would significantly improve the overall results.

You can and should read Sharma’s piece for more of the specifics on how Darvish attacked the issue using cameras, data, and bullpen sessions with constant checking.

In the end, what you’re left with is the possibility that not only will Darvish enter this season continuing to have even more success with those two secondaries (the splitter and the knuckle curve), but he may also have more success with the four-seam fastball, which he throws about twice as often as those two pitches. Pair that trio with his nasty three-style slider (slider, cutter, hard cutter), and the sky is the limit.