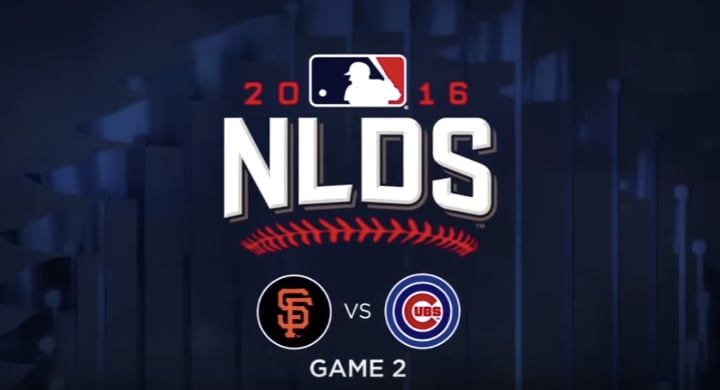 In the absence of baseball (grumble), Marquee Sports Net is re-running the top-14 games from the Chicago Cubs historic 2016 World Series run. And since I freakin’ love that idea, I thought we might play along by posting regular Pre-Gamin’ posts before each and every one. This is the second televised event – Game 1 was last night – featuring a much more exciting Game 2 of the 2016 NLDS at Wrigley Field (Don’t worry: if you don’t have Marquee, you’ll find the condensed game below).

One quick story before we jump in: Brett and I were lucky enough to attend Game 2 of the 2016 NLDS with a couple (husband and wife) of Bleacher Nation readers who had two extra tickets. So we met up with them at a bar before the game, had a couple of drinks and headed over to the stadium. However, as we were just steps away from the gate, BN Reader #2 realized that she had lost her ticket. Gone. Vanished. Nothing. Feeling like the low man on the totem pole (rightfully!), I started sweating. I knew if we couldn’t find this ticket, I’d be the one watching from Sluggers.

But get this: We walk up to the ticket booth, explain the situation, and after a few confirmations of identify, we were met with an utter surprise: A Cubs fan had found the ticket on the ground outside of Wrigley and actually turned it in. They didn’t hawk it (they easily could have). They didn’t give it to a friend. They turned it in. And we all got to see the Cubs beat the Giants in Game 2. That story always stuck with me.

Okay, from here on out, I’m going to pretend like we’re right back on that night. Mostly.

Alright, alright, alright. Our beloved Chicago Cubs have done themselves a huge favor with last night’s win over the San Francisco Giants, jumping out to a crucial 1-0 series lead.

And believe me, the Giants have their work cut out for them: Kyle Hendricks is taking the mound for the Cubs tonight, after finishing the regular season with a league-leading 2.13 ERA. He’s a real threat to steal the Cy Young away from Jon Lester, when all this playoff business is through. And remember, he’s even better at Wrigley Field: 1.32 ERA (95.1 IP).

Of course, it doesn’t hurt that the Cubs have an almost entirely fresh bullpen after Jon Lester went 8.0 strong innings last night (with Aroldis Chapman closing things out). It’s good to know they could jump in and cover a bunch of innings if they absolutely needed to. Did I just jinx something? Nah.

Meanwhile, our old friend Jeff Samardzija is taking the bump opposite Hendricks, in what will be his first postseason appearance … since the 2008 NLDS with the Cubs. Let’s hope they can knock him out early and force the SF bullpen to really work. I’m feeling good about tonight, guys. I really am.

Anyone wanna go double or nothing on the Cubbies?