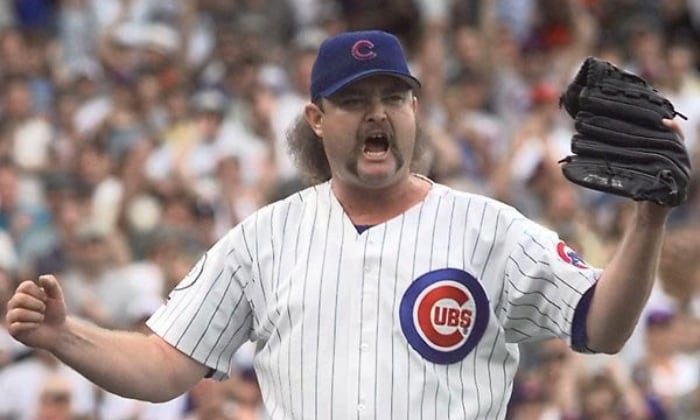 Understandably and rightly so, ‘The Last Dance’ sucked up all the oxygen yesterday. I’m just glad folks had new sports content – not quite a live game, but pretty much the same feeling – and I hope the next four weeks are just as captivating. People deserve this.

My one contribution to the discussion? For some reason this never comes up when people talk about hilarious first pitches:

In honor of #TheLastDance premiering tonight, here's the time Michael Jordan threw out a first pitch to Sammy Sosa. It … was a little wild. pic.twitter.com/9qNmQAI82J

•  Back in 1998, that was the absolute zenith of Sammy Sosa’s stardom, so it’s incredible to think that, at that moment, Jordan throwing in a Sosa jersey was completely appropriate. Sosa was coming off his famed home run chase with Mark McGwire, had just hit 66 home runs, and he would ride that wave of immense popularity right on into the 2001 season when Barry Bonds hitting 73 homers finally turned up a plurality of eyebrows about the likely PED era we’d been living in. Of course people had suspicions back in 1998 and even earlier. But we didn’t think about it much. We just enjoyed the chants of SAM-MY SAM-MY SAM-MY.

•  The game in question? The 1998 Wild Card tiebreaker between the Cubs and Giants. Man that was so thrilling. It was the one-game playoff series before there was such a thing. Enjoy the highlights, and in particular, the extremely audible “YYEEEAHH” the second the ball leaves Gary Gaetti’s bat for the Cubs’ first two runs of the game:

•  Of course the Cubs would go on to be swept by the Atlanta Braves in the division series after that, but whatever. It is still mostly a good memory. How about Rod Beck closing things out? Dude was so nails for the Cubs that year, totaling 51 saves with a 3.02 ERA, a 23.2% K rate, and a 5.7% walk rate. Sadly he passed away just nine years later. RIP Shooter.

•  Oh also? Everyone remembers that Sammy Sosa (7.1) and Kerry Wood (4.4) were the WAR leaders on that year’s club, but I’d bet dollars to donuts you’d miss number three if you didn’t check. Maybe I’ll throw the answer down at the bottom of this post.

•  The Bryants’ new kiddo got a very special shout out:

One day he’ll realize how special this is! Thank you @cubs

A year ago today, Kyle Hendricks struck out 11 Diamondbacks.

The fastest pitch he threw on the afternoon was 88 mph and the slowest was a 69 mph curveball.@WatchMarqueepic.twitter.com/o2PuN3eufA

•  Bryant is having a lot of fun this morning with this question, and I haven’t seen the correct answer yet:

•  You presume it’s NOT someone obvious like Brailyn Marquez (8th, says Bryan) or Cory Abbott (2nd), so I went for mid-80s junkballer Jeffrey Passantino, but nope. 21st.

•  If you’re looking for exercise and fitness gear to help out at home, here’s the big section at Amazon. #ad

•  As for my question up there, you may have been thinking Mark Grace or Kevin Tapani or Steve Trachsel or maybe even Mickey Morandini. But nope. It was Mark Clark, he of the 9-14 record that year, which almost certainly sunk him in the eyes of everyone. Talk about bad luck: by my quick eyeball count, dude had upwards of 14 starts that went down as losses or no-decisions that easily could have been wins if the bats had performed differently. Two terrible partial seasons with the Rangers later and his career was over.