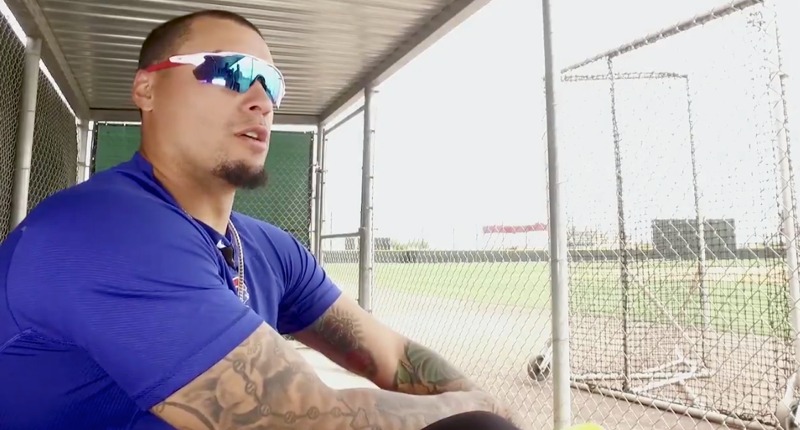 Báez Baez has grown a lot, as a player, since his introduction to the league back in 2014, becoming a World Series champion in 2016, the NL MVP runner-up in 2018, and arguably the top defensive infielder in all of MLB.

But his growth off the field has been equally impressive. Like some of his teammates, Baez has dedicated time, effort, and financial resources to multiple causes throughout his professional career and that hasn’t stopped amidst this pandemic.

Recently Baez has been in the town of Toa Baja, Puerto Rico, where he’s raising funds (alongside Twins pitcher Jose Berrios) offering hot meals to needy families. And it is from there he spoke with ESPN on a number of topics, including the status of his contract negotiations with the Cubs, his life during COVID-19, and his preparation for the upcoming season.

We’ll cover the highlights below, but be sure to check out ESPN’s piece for the whole picture.

An Extension on Pause

According to Baez, he “obviously” wants to reach an agreement with the Cubs on an extension, but with the world flipped upside down, now just isn’t the time. And, indeed, that’s not just lip-service. The MLB is literally on a transaction freeze at the moment, so a deal cannot be struck. Even if a deal could be struck right now, given the perilous economic landscape of the league (and world) at the moment, that probably wouldn’t be wise for either side right now anyway.

But fret not, Javy fans. Because he does seem to express a genuine interest in sticking around with the organization he’s been with since the beginning: “I’m very happy in Chicago. I believe it’s one of the best organizations in the major leagues. We had several conversations but never focused on a deadline. They were very amicable conversations where we communicated well with each other.”

Baez continued, discussing the “blessing” of wearing the same uniform for a player’s entire career while touting “loyalty,” as a quality he believes in.

Of course, he’s no dummy, and concedes that it is all still a business. He even mentioned the fact that Manny Ramirez, his favorite player, played for teams other than Boston, but was still always able to be “Manny.” So ultimately, there’s not much of an update here, other than Baez is still happy with the Cubs, the Cubs are still pursuing an extension with Javy, but neither side can act on these impulses given the transactional freeze and evolving economic landscape.

Preparation and Concerns for the Regular Season

And in the absence of any hard dates, Baez is struggling: “But this whole situation is making me feel a bit desperate. I’m frustrated because I don’t know what date I’m preparing for. It’s hard to stay ready that way.” His concerns are undoubtedly shared throughout the league, which makes you really consider the stress faced by pitchers, who require an even finer touch on their ramp-up before the regular season.

But it’s not just the pre-work that’s bothering Baez. He’s also already thinking about life without fans cheering him on: “And I think about how it will be really strange to play without the hustle and bustle of the fans. When I’m on deck, I always take a few seconds to look at the stands. It’s a special feeling. It will be different.”

If there are no other options, Baez says he’ll play, but he’s clearly hoping for some sort of engagement. He’s fueled by it.

On top of everything else on his mind, Baez expresses empathy for the people of his native Puerto Rico, people he is trying to help any way he can right now. He can see himself in the children he’s helping, saying that, “When I was a kid, at 6, 7 years old, I would be one of those kids lining up here to get food.”

It’s often difficult to contextualize the hardships of others, even when we’re all struggling in our own way, but the visual of a young Javy Baez in Puerto Rico, standing in line waiting for a hot meal was powerful, and I’m grateful he’s doing everything he can to make the lives of others better.

Not every member of the Chicago Cubs throughout history has been an ideal role model or citizen, and even those “role models” are imperfect. But I’m so happy to have someone like Javy Baez on the Cubs, representing this franchise and city across the world. We’re lucky to be his fans.