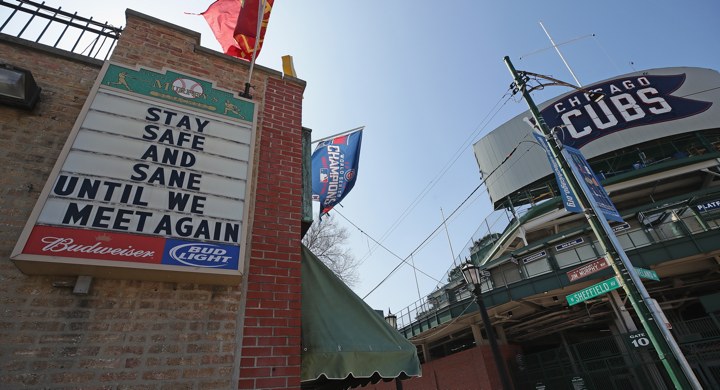 Anyone else catch themselves looking at even moderately old pictures while marveling at the total lack of social distancing or even basic spacial hygiene. I was the furthest thing from germaphobic before the COVID-19 guidelines – I do what I can now! – though I can’t help but laugh at the images of my college days and how many cups and beers and shot glasses and cigarettes and whatever else we shared every day. I know some wonder if it’ll ever be quite the same – maybe it shouldn’t be? – but I think it will. In time.

I don’t take the advent of a vaccine for granted – I know a cheap, effective, widely-enough available solution isn’t owed to us by the universe – but I do think one will come along eventually. Call it faith in science, call it hopeful bargaining, whatever. It’s coming. I need to believe that. And after 4-5 years, I bet we’ll all be swapping spit again like it ain’t no thing.

I mean, how else will I know what Brett’s sugary, icy-blue drinks taste like in the Wrigley Field bleachers, whenever we’re finally back in right field?

[Brett: You did not have to take that swing, Michael. You’re not wrong. But you didn’t have to do it.]

The Proposal Begins with Safety

The entire baseball world has been zeroed in on the negotiations between the league and union this week, the negotiations that could eventually lead to the safe resumption of MLB. However, while our attention was evidently *steered* towards the financial battle to come, that’s not actually how things began.

According to ESPN: “A multihour meeting between Major League Baseball and the MLB Players Association on Tuesday was a first step in addressing the complex issues facing a restart for the sport amid the coronavirus pandemic, though the discussion didn’t involve any economic components pertaining to player compensation, sources familiar with the meeting told ESPN.”

Well how about that? Beside the fact that it’s of course good news to begin with the actual most crucial element of any return plan – let’s not lose sight of what’s most important here (the health and safety of each player and employee who’d make a return possible) – I’m heartened by the plan of attack. It seems like the most effective strategy to actually get something done.

But don’t take my word for it, the players agree. At The Athletic, Ken Rosenthal quoted Cardinals reliever (and executive board member of the players union) Andrew Miller, who said that unless MLB could assure player safety for the 2020 season, “We’re wasting our breath with everything else.”

These negotiations will ultimately come  to the financial battle, but that’s the part that actually *can* be handled solely by the power of those in charge. Ensuring the safety of the players is a precursor issue that can’t just be sorted out later. Start there, figure out the rest later.

So What is the Plan So Far?

Circling back to ESPN, Jesse Rogers writes that the initial items addressed in the meeting include timing and logistics for Spring Training II, any potential rule changes, roster sizes, and transaction adjustments. And, of course, COVID-19 testing, tracing, and response procedures in the event of positive tests.

From where I stand, that final bit is by far the most crucial. Players *will* test positive at some point, and the procedures in place *must* be perfect. Any team can withstand the temporary loss of 1-2 players at a time, but if even one team has a more significant outbreak, the entire thing can come tumbling down. Daily testing is a must.

And to that end, Joel Sherman addresses another important point: If the league hopes to meet it’s most aggressive restart plan (Spring Training II in mid-June), these negotiations need to be done within the next 2-3 weeks so that the teams can logistically prepare the protocols they put in place in these very talks. In other words, this can’t be a zero-hour, mid-June negotiation, because the outcome of those talks are necessarily time consuming and absolute.

No meeting is scheduled for today (Wednesday).

Other Ways to Use Facilities

The Texas Rangers will be hosting a series of concerts at their stadium in Arlington in early June. How, you ask? A drive-in.

Tickets cost $40/car ($80 for VIP treatment), there will be a stage in the parking lot and folks can tune in using their cars on a designated FM radio station.

I don’t mention this because it’s “fun,” though it is, but rather as an example of the sort of thinking I hope other teams like the Cubs consider to make money at the margins, engender goodwill, and hopefully continue to employ (pay) workers for something they can do safely.

Obviously, Wrigley Field doesn’t have this sort of parking lot capacity, but they don’t pay me to think outside the box. Brett pays me to criticize them when they don’t.

No. 1 Picks Through the Years

What I find most interesting is the hit-and-miss of the top overall pick. Some years, it’s a future Hall-of-Famer and other years it’s someone you don’t even remember. Obviously, some drafts are better than others, and sometimes a miss is outside your control, but it’s still so striking. I’m sure a lot of teams felt very strongly about their direction at the time.

And that reminds me of 2013, when the Cubs picked Kris Bryant second overall, after the Astros took Mark Appel, changing the course of history in the process.

The Cubs took Rob Zastryzny with their second round pick that year (41st overall), but are no doubt very happy they eventually ended up with the Braves second-round pick 25 spots later (Victor Caratini).

Shawon Dunston in 1982 – their *only* first overall pick in franchise history.

Future Stars They Did Without

MLB.com listed one future star who got away from every team and for the Cubs, it’s Josh Donaldson. I know that one hurts in retrospect, particularly because the Cubs didn’t do nearly enough in the playoffs with their 97-win 2008 team, but man … Rich Harden (for whom they traded Donaldson, then a young catcher, in a package of prospects) was good: 1.77 ERA over 12 starts down the stretch.

I do wonder if Gleyber Torres (or maybe even Eloy Jimenez) will ever eventually dethrone Donaldson for the honor. Torres has a really good shot, but he’s got a lot to accomplish before he catches up, overall, to Donaldson.

As for the Orioles, MLB.com picked Jayson Werth with an honorable mention of … Josh Hader. Which is absurd because Jake Arrieta exists. And Pedro Strop. Duh. (I kid – not because those guys aren’t studs, but because they didn’t qualify – this was for players who were in the org, but never appeared at the big league level with that team.)

Before he was *Terry Francona*, Terry Francona was the manager of the Scottsdale Scorpions in the Arizona Fall League, where he coached … the G.O.A.T.

Jordan was really developing that year, despite what folks’ memories might be of his final numbers.

Would this even fix the heartbreak:

How exactly is this possible:

Did they seriously just nail a guy at the plate on a *sac fly RELAY*?! (via @Ben13Porter) pic.twitter.com/GgVJd9MpOW

And relatedly, who is the sneaky-slowest Cub of all-time (i.e. Not Rizzo or Caratini or Schwarber) … Albert Almora Jr.? Starlin Castro? Both guys sure seem like they should have been fast given their athleticism, but both are very much not, and I don’t care what the metrics say.