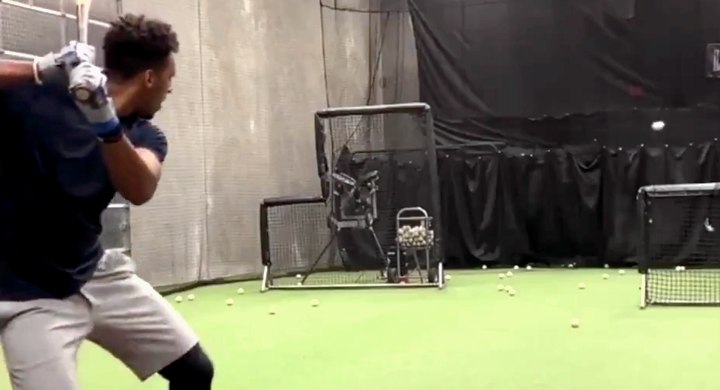 I’m not sure there will be a COVID-19 update today, so I’ll note it here up top: although yesterday was a good day on the testing front (over 450,000, positive rate below 5%, cases not spiking), and it was also the lowest death totals (non-weekend/holiday-impacted) in a long time, there are still some really troubling indicators on the transmission rate of the virus. You can check state-by-state at rt.live, and at least one new model has the transmission rate ticking just above 1.0, which means – according to that model – we’re back into “it’s spreading, not decreasing” mode. To be sure, an uptick was expected as various services and activities reopen, so I’m not sounding any panic alarms, but it’s notable that this isn’t just going away as we hit June.

•   I’ll take it from Bryan, and enjoy some Brennen Davis cage work:

I came on Twitter to demand @BrennenDavis__ post a video going oppo in practice because we need good things right now and then I caught up with an old Instagram post of his that scratched the itch for me.

Don’t forget the Cubs have a dude rising up the ranks, folks. pic.twitter.com/wEuMnMebOL

•   Obviously the time away from the game is going to hurt all prospects as they seek to develop, but I’ll stay optimistic on Davis’s breakout last year, because he came after an offseason of work that saw him transform his swing, approach, and body – and translate those things into elite results – in a way I can’t remember a young prospect pulling off in a single offseason. Maybe he’s just a guy who can truly transform himself outside of game action. (Hey, if he pulls of the same level of development as last year, but over an even longer offseason, he’s gonna be like an MLB All-Star in 2020!)

•   Davis, only 20, would have been slated for High-A Myrtle Beach this  year in a normal season. Now, while he’s unlikely to be involved in the Cubs’ taxi squad if there’s a season, he will hopefully get a chance for game action in an expanded Fall League, which is under consideration. Unfortunately, because of injuries (well, and because he forced his way into full-season ball), Davis got in just 50 games of work last year. I’m not kidding about his ability to develop absent game action, but you still want to see him getting competitive at bats as soon as possible (and for as long as possible).

•   We ranked Davis as the best prospect in the Cubs’ system, by the way.

•   Remember that brief stretch when Randy Wells was superbly awesome:

•   Well, I guess it’s more fair to say that there was a stretch when Wells got superbly awesome results:

•   Wells, obviously, was a command and contact guy, who for a year and a half just didn’t get hit hard. He didn’t give up walks and he didn’t give up dingers, and you could have a lot of success that way for a bit. But even 10 years ago, eventually, if you aren’t an extreme groundball guy, giving up that much contact – as hitters adjust – is going to come back to bite you. Specifically, if you are a lower-velocity contact guy without truly elite stuff/command, the difference between 90.5 mph (where he was in 2009/10) and 89 mph (where he was in 2011/12) could be the end.

•   Probiotics, smart home devices, and more are your Deals of the Day at Amazon. #ad

•   More on the philosophy behind the negotiations ongoing between baseball and the players:

The #Cubs drafted @gregmaddux, #OTD in 1984…8 years later, he would go on to win the NL Cy Young Award. pic.twitter.com/losTvggfmt

Our latest podcast with @sahadevsharma & @PJ_Mooney over at @TheAthleticCHI. It's too important to fail to speak on what is happening. https://t.co/6B8evrKGIz

•   Bears D-lineman Akiem Hicks had a lot to say this week, and he also shared Luis’s write-up of the comments:

This article is really well written. Definitely hit a few of the bullet points from the interview right on the head! https://t.co/mj3Zs34tbN