Angel Hernandez, Joe Torre, Eavesdropping, Lawsuits, Blown Calls from 2001 ... What Is Going On?! Skip to content 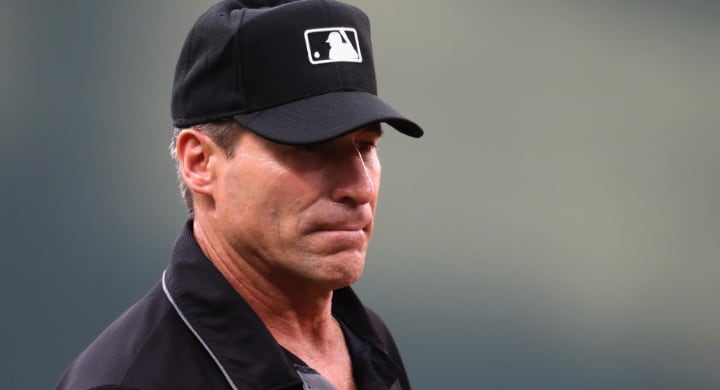 If I asked you to name three active Major League umpires right now, I’m willing to bet you’d come up with Joe West, C.B. Bucknor, and Angel Hernandez. Unfortunately, those three help prove the rule that the best umpires in MLB are usually the ones you DON’T already know.

For now, you’re about to get to know one of those game callers, Hernandez, a little bit better, because he’s entangled in quite the web with Joe Torre and MLB, who claims Hernandez literally eavesdropped on an MLB investigation into some of his on-field actions.

Daniel Kaplan’s has the whole roller coaster story over at The Athletic – and you’ll want to check it out.

Last July 24th, the Red Sox were forced to play a game under protest, when an Angel Hernandez-led crew fumbled not one, but two important rules in the middle of a game, leading to a 14-minute delay, plenty of confusion, lots of arguing, and whathaveyou.

Eventually, MLB, under then-Chief Baseball Officer Joe Torre, launched an investigation into the confusion, which apparently began with a call to each of the individual umpires working that game. But apparently, those calls weren’t individual enough.

According to a letter written after this call, Hernandez did not get off the phone after his portion of the interview, and instead purposefully and nefariously eavesdropped to the interview of fellow umpire Ed Hickox (emphasis mine):

You acknowledged that … they were intended to be separate and did not dispute that you remained on the line. Instead, you offered a number of excuses …. You claimed to not know whether you were supposed to stay on the line and that you wanted to be available if anything further was asked of you … your purported justification for staying on the line (to address any further questions) strains credulity in light of your claim that you only heard portions of the Hickox call and the fact that you remained silent even when you heard statements by Hickox that you later claimed to be inaccurate.

Simply put, we find your asserted justifications for remaining on the line to be implausible, internally inconsistent, premised on facts that are incorrect and not credible. As a result, we have concluded that you remained on the line in an effort to intentionally and deceptively eavesdrop on a confidential conversation in order to hear what Hickox would say about the July 24 incident.

This is an egregious offense.

Torre then told Hernandez he was relieving him of his acting crew chief status, which … ouch.

If this story were to end right here, I think it would be plenty crazy, but (sadly?) there’s a lot more to it, and it’s not all bad for Hernandez. In fact, he may have some serious gripes with the league.

At the moment, Hernandez has a lawsuit opened against MLB, filed in 2017, when he was passed over for promotions and not given World Series assignments, for what he contends was a racial bias. And before you react against him, citing his history of not being the best umpire in baseball, consider MLB’s response, which doesn’t seem to help their case *at all*.

“Based on the results … for the employment decisions at issue, Dr. Denise Martin (MLB’s expert) concluded that the observed outcomes for crew chief promotions and World Series selections all were ‘statistically likely’ and that there was no statistical significance to the fact that there have been no minority umpires promoted to crew chief since 2011 and that only two were selected for the World Series between 2011 and 2018 (one being selected in two separate years),” MLB argued.

My racial sensitivity may be at an all time high, so forgive me if I’m being daft, but … what? Is MLB really using the fact that there have been no minority umpires promoted to crew chief since 2011 and only two selected for the world series as evidence that there is NOT racial bias, because it was somehow statistically insignificant … based on their own internal math?

At best, I am confused.

More to Hernandez’s point, MLB has now used the “eavesdropping” infraction (the nefariousness of which Hernandez clearly denies) as part of a broader case to throw out this racial bias lawsuit. And given Hernandez’s history with Torre (they apparently never got over some call that went against Torre and the Yankees back in 2001), you can start connecting red strings all over your apartment.

Now, here’s where I provide some unsolicited, baseless speculation that paints both sides as bad, winning me no friends.

Do I believe that MLB has a racial bias (whether intentional or not) limiting umpires, players, coaches, managers, and executives from ascending the ladder at the rates you would have otherwise expected? Well, yeah. The numbers on that front are the numbers. It’s been an obvious issue for decades. But do I believe that’s the only reason Hernandez, specifically, was passed over for a promotion or a World Series gig? Not necessarily. He’s legitimately had serious performance issues. In fact, MLB put together a little hit-list against Hernandez to bolster their case in his lawsuit, citing some of Hernandez’s worst moments … and, I mean, yeah … this isn’t a good look:

•   He asked Homer Bailey to sign eleven (11!) baseballs after his no-hitter, even forcing an authenticator to watch him sign the balls so he and his crew could sell them later. Hernandez doesn’t deny this, has since returned the balls, and even paid a fine.
•   He had three calls overturned by replay in the first four innings of a 2018 playoff game (I mean …)
•   He’s thrown his headset in anger after having one of his calls overturned.

So where does that leave us? I don’t know. I’m not a judge, but MLB, Joe Torre, and Angel Hernandez clearly have some serious beef with one another, and whether part of that beef is racially motivated, based on a call from 2001, or legitimate institutional gripes, is almost beside the point. This is just another terrible look for baseball, anyway you slice it.

Check out all the details at The Athletic: