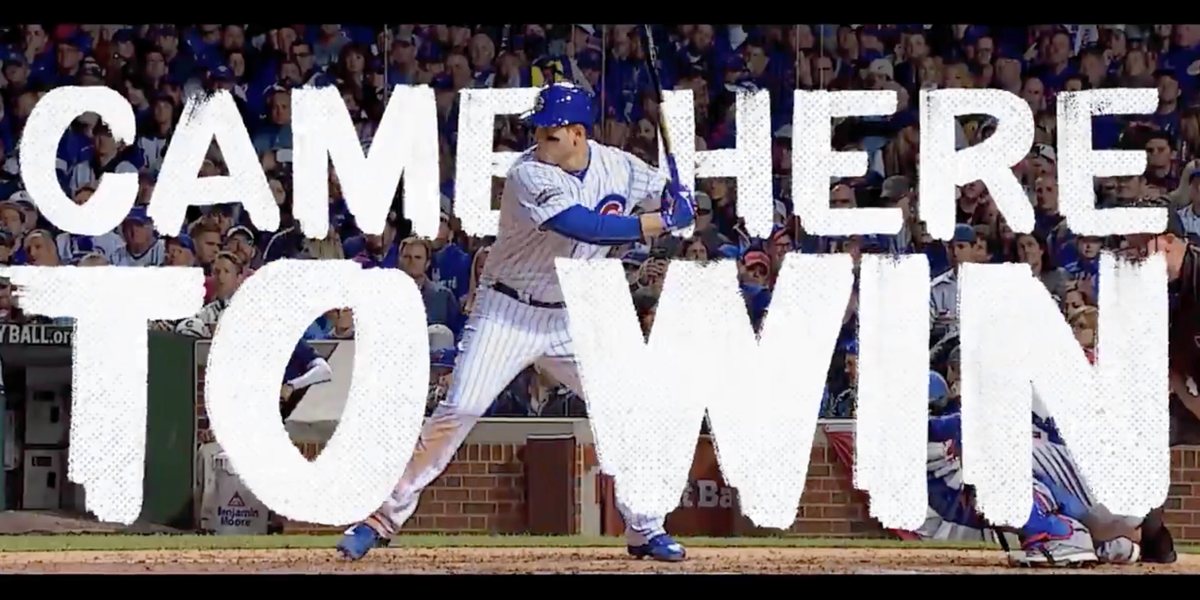 Time to start planning out my beer/White Claw options for this evening. Couldn’t get too far ahead of myself!

•   The Cubs want to wake you up with some HYPE today:

•   On the expanded postseason, David Ross had this to say (before it was official, technically): “I’ve got mixed thoughts on that. I understand maybe what’s best for baseball and the 60-game season is putting more teams in the postseason and see how that plays out. But, I’m a believer of baseball is a game about overcoming adversity, and this is as big of an adversity as I think you can put yourself in. And the team that did the best job in the down time of being prepared and staying ready should be rewarded, whether that’s the big-market teams or a team that wasn’t even on the radar to maybe make the playoffs. If they play well in these two months, they deserve to get in and fight for a championship. I’m probably a little bit against expanding it. Let’s make it mean something. Let’s go. Let’s get after it from Day 1. I think everybody’s into this sprint mentality and I’m into it. Every game matters. Let’s not water anything down. Let’s get after it from Day 1.”

•   An understandable perspective. Though the flip side there is that we already know 60 games isn’t enough to tell us who the best teams REALLY are (just the teams that have gotten the best results so far (though 60 is actually surprisingly close to “enough”)), so if the playoff pool is too small, you might leave out the “best” team. For me, in this particular season, I think it’s a fine idea. But I do take Ross’s point.

•   The Cubs have been without quality assurance coach Mike Napoli through camp, it turns out, because he tested positive for COVID-19 before the start of camp. The Cubs hope he can be back with them soon.

•   How’s this for fun on the Cubs’ roster: 40% of their rotation was developed in their minor leagues, and 27% of their bullpen was entirely home-grown. The Cubs basically have a lot of home-grown pitchers now! Right?!

•   Interesting note on how a couple of the final pitchers were selected for the bullpen:

•   I’m not saying this ENTIRELY blows up what I wrote about the Mookie Betts deal, but this is a really, really significant value change that no one is talking about:

•   I mean, that makes the effective AAV on the deal just $25.5 million, or only a hair more than the AAV on Bryce Harper’s 13-year deal. Does anyone think Mookie Betts gets less than Bryce Harper in a normal market? No chance. So all that talk about the Dodgers doing something that seemed absolutely crazy in the middle of a pandemic and without regard to the financial fallout? Eh. We can soften that up considerably.

•   Betts and the Dodgers won his debut last night, by the way, with the Yankees beating the Nationals in a rain-delayed opener. It was really great to be watching baseball, particularly just seeing Max Scherzer and Gerrit Cole squaring off with their ridiculous stuff. Oh, and seeing Giancarlo Stanton hit the first homer of the season 459 dang feet:

“Honestly, I’m disappointed. I know this is a business and it’s a decision that was out of my control. … I am confident my time will come and in the meantime, I’ll be down in Springfield doing everything in my power to stay ready.” — Dylan Carlson, OF https://t.co/WNsHE6XRjl

•   Carlson, 21, is probably ready to be a contributor, but he also has only 18 games above AA, so the Cardinals aren’t WAY out of bounds here. The thing that sucks about this season in particular is that the way service time is calculated in the shortened season, a prospect like Carlson can miss only the first eight days and then the team gets the extra year of control … and it’s not like the team can say, oh, he just really needed that time at our back-up facility. It’s not even real minor leagues. We’ve done this dance as it related to Kris Bryant, so I don’t have a ton to add other than to say I really hope the way players reach arbitration and free agency is fundamentally changed in the new CBA. Younger players have become too disproportionately valuable for the current system to continue.

•   Heads up to a big sale at Obvious Shirts for Opening Day:

Baseball is back and this sale is now live! @obvious_shirts

Nine months after he was hired, David Ross is still the right manager right now for these Cubs, writes @PJ_Mooney @sahadevsharma: https://t.co/dX00NdcadW pic.twitter.com/vh4CSE54LU

•   What a fantastic Ernie Banks story from Eddie Vedder:

Tomorrow night on ⁦@WatchMarquee⁩ it’s the first of 2 shows with Eddie Vedder of ⁦@PearlJam⁩ ! Side A of the album airs on ⁦@OffTheMound⁩ presented by ⁦@Sloan_Valve⁩ right after Cubs Postgame Live! Baseball, Music and more! #HOF #Gigaton ⁦@Cubs⁩ pic.twitter.com/kNc6thwUZz

•   To my Indiana and Iowa friends who want to start gambling on the Cubs, there’s a special event going on:

Fun heads up to our friends specifically in Indiana or Iowa. Jump on this: https://t.co/nYbX282RUs

•   And for everyone else in Illinois, if you want to get into sports betting, check out that page.