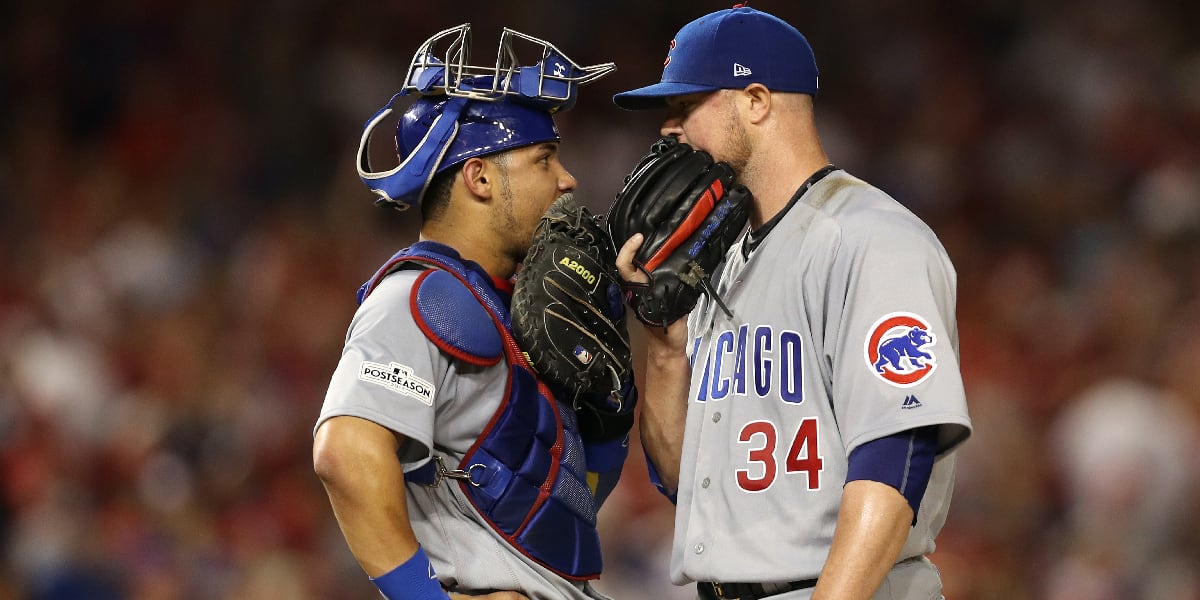 If the Cubs win Game 2 of the NL Wild Card Series later this afternoon, they’ll have at least one more game at to play here in 2020. And that game could potentially pit the fate of this entire championship window *with this core* in the hands of the guy who started it all: Jon Lester.

Indeed, since David Ross retired after the final out of the 2016 World Series, Willson Contreras has taken up the mantle as Lester’s personal catcher, which is no small feat for a rookie and former infielder. Lester isn’t just a grizzled veteran who probably liked things the way he liked them, he’s also been an extremely successful pitcher throughout his career (5x All-Star, 3x World Series Champion, No-hitter pitcher, NLCS MVP, etc.). Taking over for a guy like that comes with a lot of pressure, but Contreras did well.

Catching virtually every Lester start for which he was healthy, Contreras led Lester through a very difficult transition in his career, while keeping the veteran productive enough through the regular season (he was actually the “Wins” leader in 2018), and his usual dominant self in the postseason.

And Lester won’t soon forget it, all quotes via MLB.com’s Jordan Bastian …

What a vote of confidence:

He’s meant a lot. We’ve grown together, you know? I’ve turned into a newer version of me. Or, I guess, an older, newer version of me. We’ve had to adapt. We’ve had to learn on the fly. Hand he’s meant a lot to me at this point in my career, just the feedback and the confidence and the kick in the butt that he does sometimes. He’s just done a really good job, not only with me, but our whole staff.

Contreras Is a Baby in Catcher-Years:

And that’s all the more impressive considering how little experience he had:

Man, Willy’s grown up a lot. I think people forget he just started catching. When I say just started catching, in the grand scheme of things… You know, Rossy caught for pretty much his whole life, so he’s been back there a long time. Varitek, those guys, they caught for a long, long time. Willy was an infielder up until not too long ago. I couldn’t give you the exact year, but he converted to a position he’s never played. And then he skyrockets to the big leagues and you expect him to catch games in the World Series, expect him to catch games in a postseason chase, a pennant chase, a division chase, and expect him to learn in those situations. That’s hard to do.

The Cubs signed Contreras as a 17-year-old third baseman back in 2009, and transitioned him behind the plate two years later because he was … bored during a minor league game. Five years after that, he was catching the final out of the 2016 World Series.

A Completely Different Guy Behind the Plate

And finally, Lester commented on his improvements behind the plate:

I think this year, this offseason, and then coming into spring, we saw a little bit of a different Willy. A little more confident back there. I know guys have been on him about his pitch framing and pitch stealing, all the new metrics stuff behind the plate. I think the quarantine did him some good. He really kind of focused on that catching side and the one thing I’ve seen over the last, I guess it’s year, year and a half, is separating his at-bats from coming behind the dish. You see it all the time in the infield, the outfield. Guys take their at-bats out there and that’s one position that’s really important that you don’t do that with. And he’s done an unbelievable job of growing, learning.

The new way he’s catching, I feel like the metrics are probably on his side a little bit more this year. I don’t know the numbers on that, but I would hope that they are.

We’ve discussed this a thousand times already, so I’ll give you the condensed version today: After ranking 51st (2017), 53rd (2018), and 43rd (2019) in terms of framing extra strikes over the last three years (min. 1000 pitches), Contreras ranks as the 4th best catcher in baseball this year by the same metric. It has been a meteoric rise and not one Lester will soon let anyone forget.

I think we all suspected Lester would take a massive step back on the mound when Ross left him in 2016, but Contreras has not only been there to pick up the slack, he’s actually helped him evolve and remain productive all the way to the end of his contract with the Cubs. What began as a veteran pitcher lumbering through a development process with an inexperience catcher has turned into yet another beautiful and iconic Jon Lester-led battery. Nicely done, Willson. You’ve earned this praise.

Want to know what Jon Lester thinks of Willson Contreras? Well, pull up a chair and set aside some time, because Big Jon had a lot to say about his catcher on Thursday morning… pic.twitter.com/fNd0IGnO6k