MLB Playoffs: Braves Hang On to Put Dodgers Down 2-0, Altuve and Astros Throw One Away Skip to content 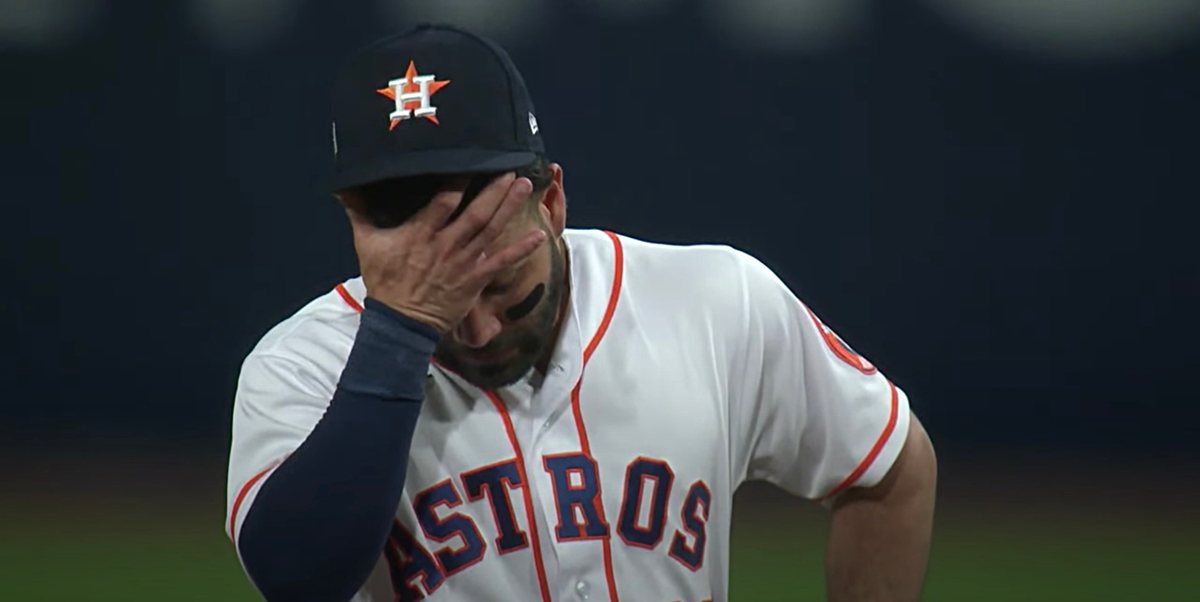 The Dodgers are in trouble, now down 2-0 in the NLCS to the Braves, and with a lack of clarity on when Clayton Kershaw (back spasms) can pitch again. Worse, they’ve leaned heavily on their bullpen already in the first two games, and there are no off-days in the NLCS this year.

The Braves nearly blew a 7-0 lead in the game, with the Dodgers putting the tying run on third base in the 9th inning, but the Braves finally closing things down for an 8-7 win:

That 8th Braves run? The one that wound up making all the difference? Get this: it was another Ozzie Albies home run into the bullpen caught by Mark Melancon. Yes, I say another, because that JUST HAPPENED the night before:

Meanwhile, the Astros are in even more trouble than the Dodgers, as they’re already down 3-0 to the Rays, and the world weeps:

The Astros carried a 1-0 lead into the 6th inning when things fell apart. With a runner on first and nobody out, Brandon Lowe hit a might-be-double-play ball to Jose Altuve. And, for the third time in just two games, Altuve threw it away:

If Altuve makes that simple throw, it’s possible the Rays don’t score any of their five runs. It’s probably not enough of a sample to say it’s the yips already, but it sure has a yips feel – the possibility that he’ll be left to ruminate on this all offseason long. That’s how you DO risk getting the yips.

After the cheating scandal, the lack of punishment, and the initially ridiculous responses/non-apologies, I don’t think you’ll find too much sympathy out there from the average non-Astros fan, though.

In fairness to Dusty, I’m not sure what else you can offer except cliches when you’re down 3-0:

Dusty Baker: “So far things haven’t been going our way. We really have our backs up against the wall. It’s a steep mountain to climb, but it’s not impossible. We got to tighten our belts, put our big-boy pants on and come out fighting tomorrow.” pic.twitter.com/fLFBxgCIzB

Zack Greinke will try to extend the Astros season one more game tonight at 7:40pm CT against Tyler Glasnow.

I expect MLB and TV execs right now are sweating the possibility that the World Series will not only have neither of the Dodgers or Astros, but both LCS will be sweeps.