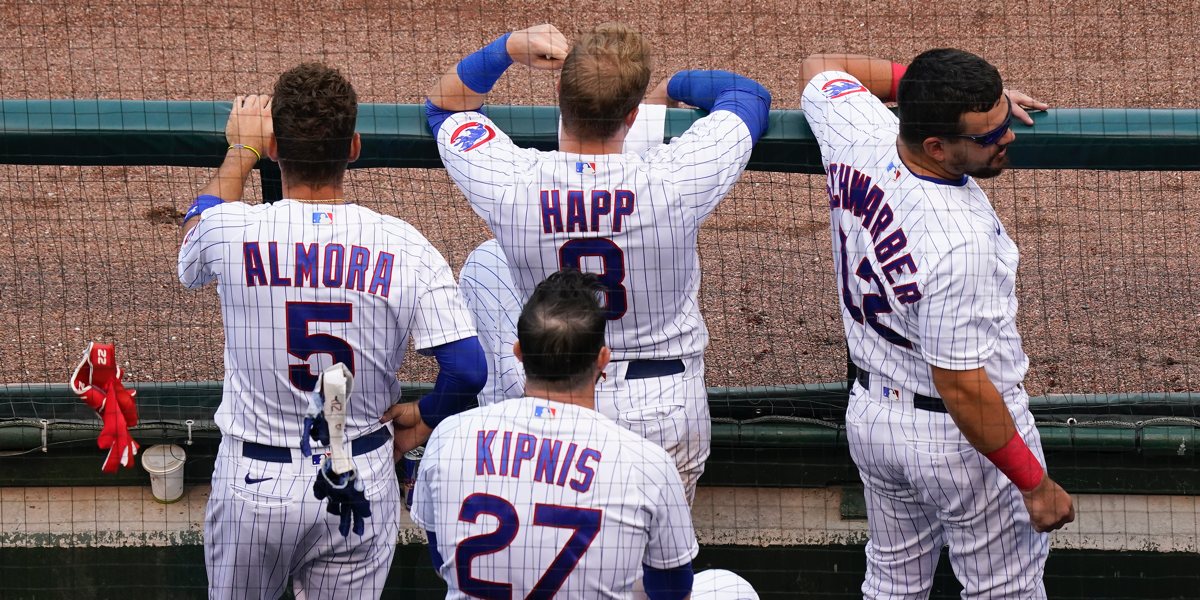 When you hear the loud *thump* from upstairs, and steel yourself for the next two seconds to see if it’s going to be followed by a scream or a cry. Ah. Sweet relief. Just shenanigans, not an injury.

•   My rough observation yesterday around baseball, as teams added to their 40-man rosters at the deadline, was that there was a LOT more aggressiveness than usual in protecting fringier prospects. We saw it with the Cubs – you could’ve made an argument that Christopher Morel was too young and raw to be worth protecting, and that Keegan Thompson had shown too little the last couple years and offers limited upside – and I felt like I was seeing it all over baseball. If a guy was a close call, he got protected.

•   That’s not to say the Cubs (or any other club) did the wrong thing. I’m glad the Cubs protected who they did. Why? Because the fact that so many teams were being so aggressive yesterday tells me they were anticipating that teams were ALSO planning to be very aggressive in the Rule 5 Draft (anticipating a desire to fill roster spots with cheap players?). It would really suck to lose upside like Morel, or possible 5/6/7 starting pitchers for 2021 like Thompson or Cory Abbott.

•   Another reason I’m glad the Cubs protected Thompson and Abbott? Because of the loss of the minor league season, we didn’t actually get to see what pitchers would’ve taken big steps forward this year now that the DRAMATICALLY overhauled development infrastructure was fully in place (it was being changed in very fundamental ways from late 2018 through 2019). In fact, the only real taste we got of starting pitchers who’d been working in the new system were the guys who came up to the big leagues and made starts – i.e., Alec Mills, Tyson Miller, and Adbert Alzolay. So that’s pretty interesting, no? Kinda want to see what the other guys in that tier could look like after more development in the new system. The Cubs were banking a whole lot on these changes (which Theo Epstein this week said were largely driven by Jed Hoyer).

•   FanGraphs did a mock non-tender for the whole league based on informed speculation (a wild exercise, but a sign of the times), and the Cubs shake out how I would have had it, too, at least for the names that were included. There are three categories – Likely, Tough Call, and Unlikely – with Albert Almora, Jose Martinez, and Dan Winkler falling into the Likely group, Kyle Schwarber falling into the Tough Call group, and Kris Bryant falling into the Unlikely group. I think I might’ve had Winkler in the Tough Call group (he could see upwards of $1 million in arb and the Cubs might be able to retain him for less, but I know they like him), and

•   Among those not discussed by FanGraphs … I also would’ve included Kyle Ryan in at least the Tough Call group (very down in 2020 in a lot of ways, projected for up to $1.5 million). It think Ryan Tepera (projected up to $1.5 million) and Colin Rea (projected up to $1.6 million) are non-tender candidates as well. It wouldn’t surprise me to see the Cubs non-tender all the borderline relievers, actually, and then try to bring back a couple on lesser deals as the offseason plays out. We’ve seen that the Cubs are not afraid to target other fringe types, and have had great success in doing so (indeed, all of these guys have been brought in on the cheap the last couple years). Non-tendering all of Winkler, Ryan, Tepera, and Rea could save the Cubs upwards of $5-$6 million, which could go a long way in an offseason like this (and with a budget as potentially tight as the Cubs’).

•   The non-tender deadline is in just 11 days, and you are reminded that, as unhappy as it might make you, there is just zero chance that the Cubs aren’t trying very hard to trade (at least) Kris Bryant and Kyle Schwarber before that deadline so that they don’t have to be the ones to make a decision. Rumors have it that the Cubs are also very open to dealing Javy Báez, but his is a much easier tender decision, so the Cubs would feel less pressure to move him in the next 11 days. (And, let’s be honest, given his position, defensive floor, and verve, he’s the guy of those three you’d most want to see the Cubs figure out a way to just extend this offseason.)

•   Elsewhere on the mock non-tender, you notice how many likely non-tenders the Brewers have, how few the Cardinals and Reds have, and how the Pirates have already gotten started on theirs:

•   Trevor Williams, 28, will be a popular buy-low option on the starting pitching market, as things really backed up on him the last couple years, but he was such a good contact-manager in 2017-18 that teams will want to see if they can get that back and find a cheap, young 4th/5th starter.