Hey, Let's Not Forget That Jason Heyward's Offense Continues to Turn Around Skip to content

I’m trying my best to strike a psychological balance between pitchers and catchers reporting in just one week and the reality that there’s still some offseason to go – for the league (some key free agents still out there, and trade possibilities) and for the Cubs, specifically. It’s tough to block out the noise of a potential Kris Bryant trade or decent pitcher signing, but as we continue drawing nearer to the 2021 season, we’ll simply have to assess the Cubs roster as it stands.

So with that in mind, let’s discuss one of the Cubs best players from 2020: Jason Heyward.

Perhaps it slipped your mind (or maybe it’s just feels too good to be true), but Heyward (1.8 WAR) was actually the second most valuable Cubs position player in 2020 behind only Ian Happ (1.9 WAR). And he was the Cubs fourth most valuable player overall (Yu Darvish was worth 3.0 WAR and Kyle Hendricks was worth 1.9). In terms of offensive production relative to the league and park factors, Heyward (131 wRC+) finished just barely behind Happ (132 wRC+) when the season came to a close …

… Continuing a five-year trend of progress beginning with his first season in Chicago: 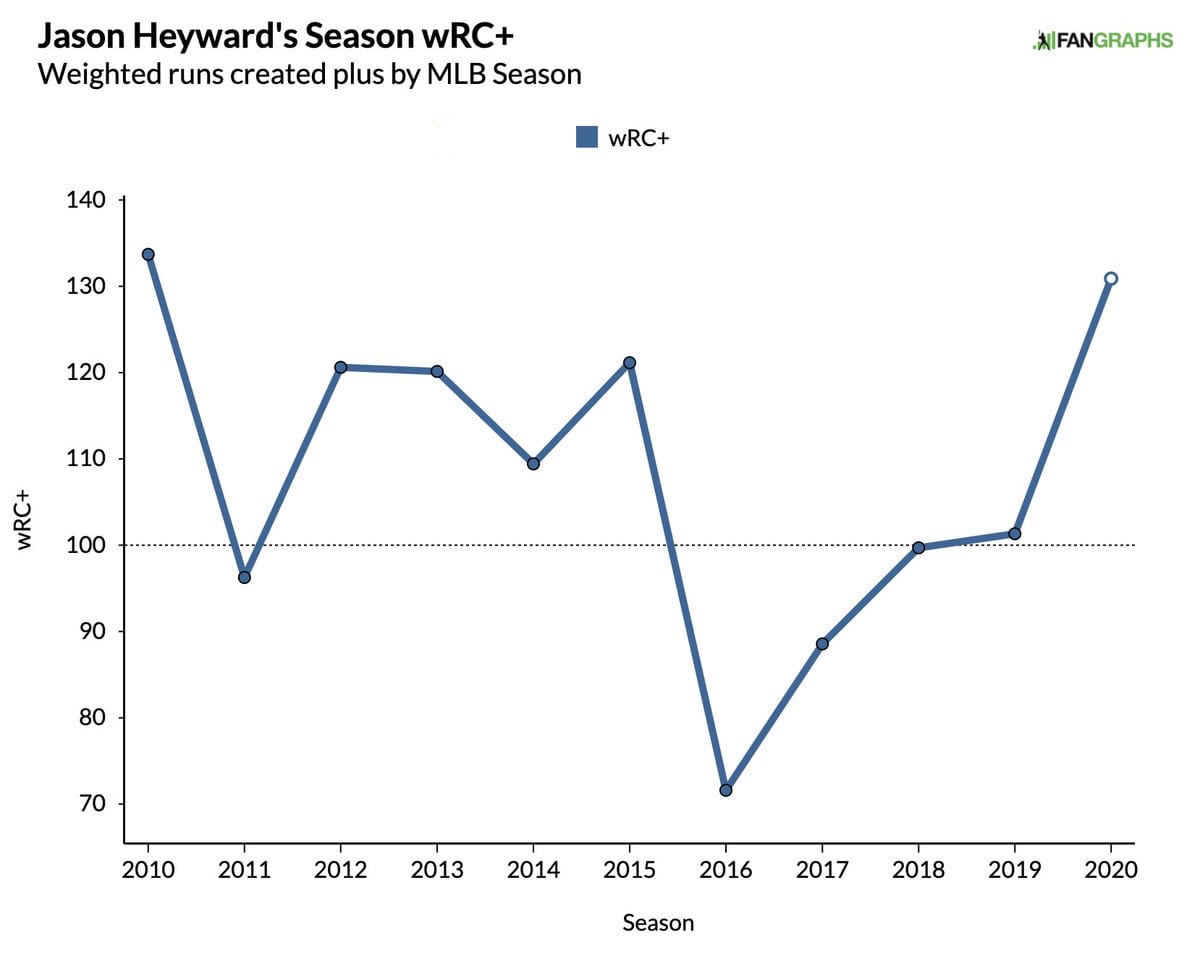 Encouragingly, however, Statcast actually had his expected wOBA nearly 10 points higher than that, thanks to a smattering of strong contact data.

For example, in 2020, Jason Heyward hit the “sweet spot” of his bat at a Statcast Era-high 42% rate, despite sitting in the upper 20s/low-30s throughout his career. While his 87.6 average exit velocity was slightly lower than his career mark, thanks to career-high 11.3% launch angle (tied with 2019) and a career-best 40.2% hard%, the overall quality of his contact was actually greatly improved. Remember, Heyward has kind of always made hard contact, his issue had simply been that so much of that contact was driven directly into the ground, neutering most of its expected value.

We can’t simply ignore that all of this was done in just a 50-game sample of 181 plate appearances – that certainly matters a lot – but when the underlying data is so strong *and* he looks more comfortable at the plate *and* it continues a five-year trend of improving production, it’s perfectly fair to at least take notice.

Considering where things started with Heyward and the Cubs, that’s an absolute dream. Think back to 2016, and remember that we were all kinda like, “Uh oh, this contract still has seven more years on it …. ” Now? There are three years left, and I’m actually really optimistic about them in his age 31-33 seasons!

Summing all that up: In 2020, Heyward swung less often overall, but particularly on pitches out of the zone, which got him into better hitter counts, which allowed him to make more consistent, hard contact in the air. And that, in turn, allowed him to increase his overall production *and* support that level with improved underlying statistics.

So what do his projections say?

Well, ZiPS doesn’t quite believe in the power just yet, but a .257/.346/.413 (99 wRC+) forecast is hardly disappointing given the conservative nature of projections, the small sample size in 2020, his other value on the field and in the clubhouse, and the truly horrendous offensive seasons of the not-so-distant past. Still, I am expecting him to beat that offensive level of production. But if my gut’s not doing it for you, note that PECOTA is a little more bullish on Heyward’s 2021 season, projecting a 102 DRC+ with an 80th-percentile projection of 111 DRC+, or just about where he was in 2020.

We won’t know if the changes Heyward has made to his approach at the plate will continue leading to better counts, more hard contact, and ultimately better overall production, but given his gradual improvement and the support of two different projection models, I’d say it’s fair to be excited about his expected contributions on offense in 2021.