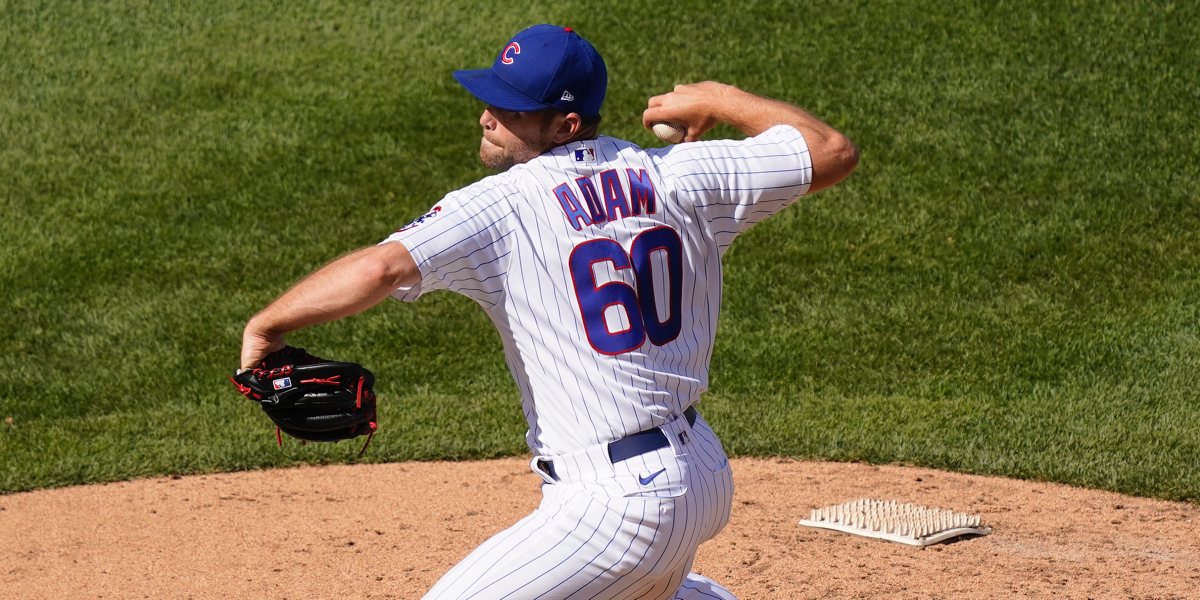 In last week’s Instagram Live with Brennen Davis, Brett had me ask the top prospect what the best pitch was that he faced at the Alternate Training Site. He offered two (6:50 mark): the slider that has raised Adbert Alzolay’s floor and ceiling, and Jason Adam’s changeup.

I might have guessed the Alzolay one, but the Adam answer took me by surprise, and led me down quite a wormhole. And in doing so, has me wondering if we’re sleeping a bit on Adam’s ceiling as a late-inning reliever.

Before Brennen’s answer, I’d have answered that the breaking ball was Adam’s best pitch, a 3,000-rpm slurve that yielded an absolutely ridiculous 69.2 whiff% in 2020 (Brooks Baseball separates these into two, a slider and curve, which I think is correct,  but they serve similar functions). And in 2019, when Adam was with the Toronto Blue Jays, he had the most success with his four seam fastball that combined elite spin and mid 90s velocity. And yet Brennen’s telling us that the best in his arsenal might just be a changeup, a notion that Pitching Coach Tommy Hottovy signaled he might agree with in this quote from a Sahadev Sharma piece last September:

“The one pitch I think is so unique with him is the changeup. He’s such a high-spin four-seam, high-spin breaking ball, stuff that’s off the charts in terms of spin rate and then all of a sudden he has a crazy low-spin changeup. You just don’t see a lot of guys who have rise and high-spin-four-seam and breaking balls and then have a really good changeup, too.”

In that piece, Sharma offered a simple but perfect description of the pitch: “it almost looks like a two-seamer.” This is exactly right. Adam throws it 88-92 mph, which isn’t great separation off his 93-97 mph four seamer, but the movement makes them so distinct. The Adam changeup has depth and arm side run that are both 13% above league average for the pitch type, according to Baseball Savant. Here’s one that has Maddux comeback two-seam type movement:

And while all that is mighty impressive in its own right, I wondered if there was something else happening that might make it more challenging to hitters like Brennen than it looks to viewers like us.

These days, if you’re a nerd like me, that means three words: seam-shifted wake. This is a concept being led by Dr. Barton Smith — you can find great explanations of it here, here, here and here – but I love the simple phrasing via Pitching Ninja: using baseball seams to alter pitch direction. The slight differences that pitchers have in the way the seams of the baseball are oriented as they travel through the air can create differences in movement, even if the velocity and release point and spin rates are identical.

So I asked Dr. Smith if he would be willing to lend me his analysis on whether Jason Adam’s changeup benefitted from seam-shifted wake in 2020. And indeed it did. According to the professor, Jon Lester’s changeup had the seventh-highest axis shift (the measurement Smith uses to describe seam-shifted effects) among pitchers to throw 100 changeups in 2020. Had Adam reached that threshold – he threw just 40 – he would have ranked above Lester.

This is the visual representation that Dr. Smith uses (the deviation representing the axis shift): 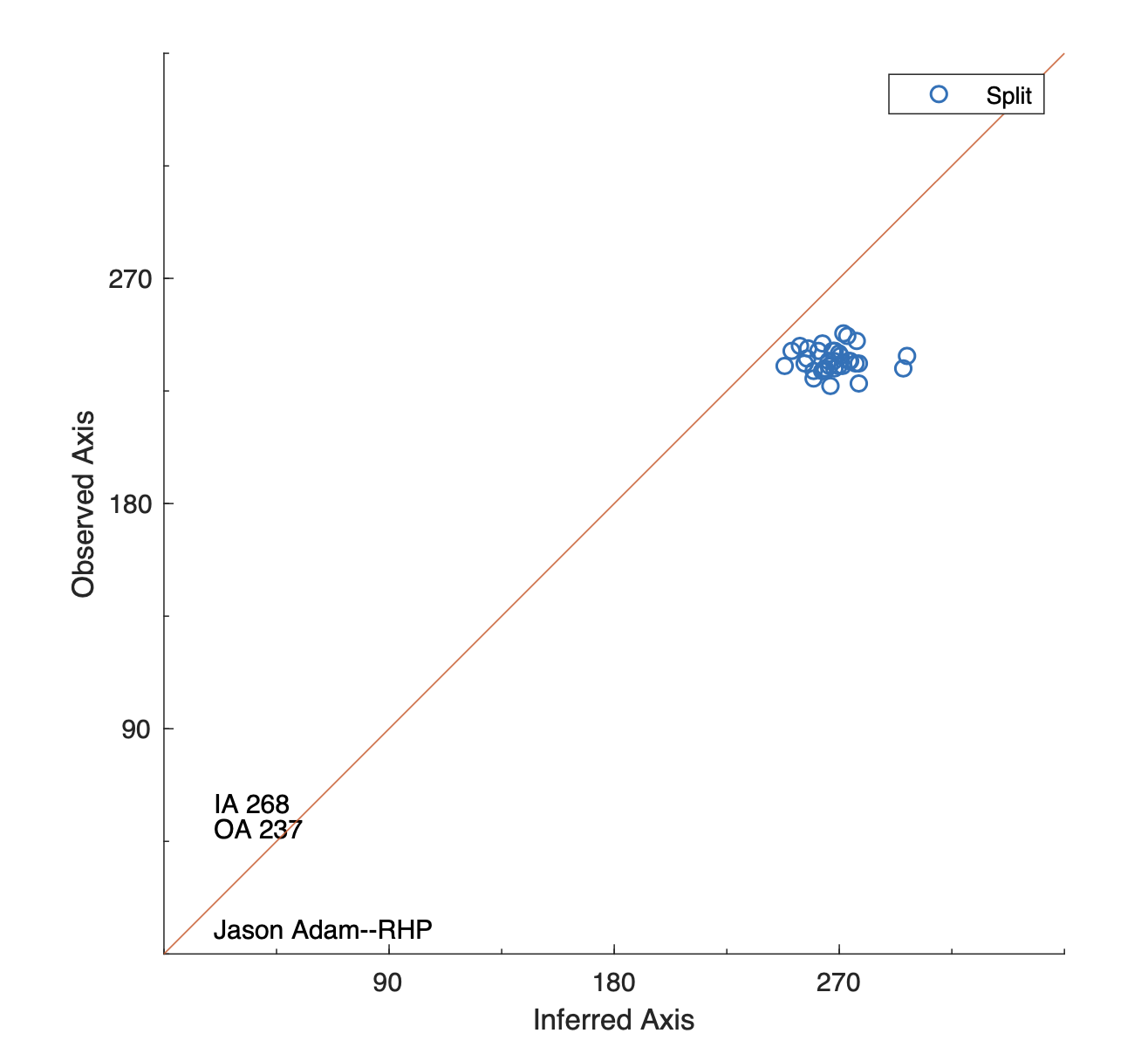 So I do wonder if part of what makes the Adam changeup particularly difficult on hitters is its seam-shifted effects. Weaponizing that consistently is one of the next frontiers in Major League Baseball.

The lower hanging fruit for the Cubs and Adam in the meantime will simply be finding more opportunities to call for the changeup (it had a career-high 15% usage in 2020). It’s important to remember that Adam is still pretty new to trusting the changeup in short appearances. In 2018, Adam suggested Salvador Perez began calling for “three of them every time I go out” after he barely threw it in the minors. He finished the season having used it 7.9% of the time. At the time, Adam saw the pitch mainly as a diversion: “It just helps to have that extra pitch to get them off the fastball a little bit,” Adam said then.

The changeup is probably the pitch which depends the most on its sequencing, with Adam pointing out its main tool: to slow the bat on fastballs, usually for hitters from the opposite side, usually thrown below the zone. Those are still the ways Adam seems to prefer it: 26 of the 40 changeups he threw were to lefties, 26 of the 40 were in the bottom third of the zone and lower, and 20 of the changeups were preceded directly by a fastball.

I just wonder if the key to using this dangerous pitch is to expand the possibilities on when he can sequence in a changeup. Here, for instance, was the only time Adam used the tunnel of a high fastball to get a swing-and-miss from a good right-handed hitter on the change. It seems worth going back to:

I also think there’s a good case to be made that Adam might be even better off sequencing the changeup off his breaking ball instead of the fastball. You’ll see on his Brooks Baseball page that his release point on the change is far closer to the breaker than the fastball, and I like the way they can confuse hitters in moving opposite directions. If you see the 3D Pitch Visualizer on Baseball Savant, they also just look a bit more similar than either does with the fastball.

Here you see an awkward swing from Nick Castellanos on a not-even-that-great change that benefitted from the previous pitch:

The numbers, even in their tiny sample, do give a bit of support to the eye test. Adam threw 12 changeups directly after the breaking ball, and those pitches led to four swinging strikes, three foul balls, two balls, two outs, and a called strike.

I guess what I’m saying is this: the pitch is nasty, and we have confirmation from hitters, professors, numbers, and results. I’d like to see Adam throw more of them in 2021. I think it will help him rise up the ranks (perhaps even to the top) of the Cubs long-term bullpen plans.

(Honestly, like six people helped me write this silly post about a single pitch. They know who they are, and I thank them.)