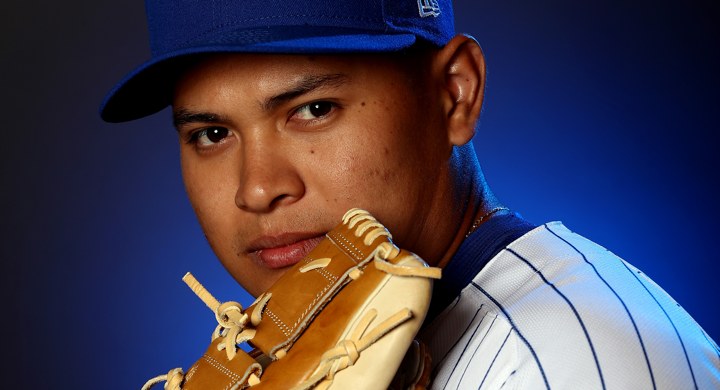 I never expected to find the Triple-A Cubs in Schaumburg, Illinois, but yesterday I made the drive to the Western Suburbs to see exactly that. We’re in the final few days of the Alternate Training Site format for the minor leagues, setting up Wednesday’s contest between the Cubs and White Sox as more of a tune-up for the Triple-A squads.

The star of the day was Ben Holmes, the left-hander the Cubs signed this offseason coming off a Driveline Pro Day event in Arizona. When they did so, I expected Holmes might be in the mix for a bullpen spot in Iowa or Tennessee. Instead, I’d think this start solidified his hold on a Triple-A rotation spot, which probably means the rest of his camp has gone as well as this start did. He threw five shutout innings, and I don’t believe the White Sox even reached second base against him.

Holmes, a smallish lefty listed at 6-foot-1, has a quick tempo delivery and over-the-top arm slot. He features a three-pitch mix of fastball, slider, changeup and threw all three with regularity in this outing. After comparing the stadium gun to a Stalker radar gun behind home plate, I don’t trust the numbers I saw enough to quote one, but Holmes was anywhere from 91-95 in this video from the winter. The pitch played above its velocity with good life up in the zone, clearly getting some Vertical Approach Angle benefit.

Mike Wright dominated the bottom third of the I-Cubs lineup with either 2 or 3 Ks.

Bottom half Ben Holmes worked around one single to keep the game at 0-0. Hit a new high at 92 mph.

The two secondaries both worked for Holmes yesterday as well, as he was spotting gloveside and backfoot sliders seemingly at will. Holmes seems to have the ability to manipulate the pitch a bit, tightening it up for horizontal movement or adding some vertical movement (where it can get a bit loopy) as an early-count freeze pitch. The changeup earned one strikeout, showing best below the zone on the armside corner.

When Holmes last pitched professionally in 2019, he showed a significant platoon split (.913 OPS vRHH, .705 OPS vLHH), which you’d generally think would mean his next opportunity would be as a relief specialist. But I think the Cubs decision to keep him as a starting pitcher, based on what I saw in this outing, signals a belief that his slider has become a sustainable weapon to righties.

So where does this leave us with the Triple-A Iowa rotation? We know Holmes and Cory Abbott, the two that have started exhibitions, will still be there. I’d expect they are joined by Kohl Stewart and Keegan Thompson, the latter of whom is currently with the big league team in Atlanta on the taxi squad. For the fifth spot, I think we’ll either see Tyson Miller (if he’s worked his way back yet), Justin Steele (if his lack of presence in the Cubs bullpen is explained by the Cubs lengthening him out in South Bend), or Matt Swarmer (who was starting games for the Double-A team in Arizona this month).

Other notes from my day in Schaumburg:

Manny logged outs to each of the 3 hitters he faced, but also allowed a run.

First guy reached on a wild pitch strikeout, stole second, advanced to third on error on the throw, scored on wild pitch. pic.twitter.com/nTeyKlKzzO