“I think you’re aware of it, just in the back of your head,” he said. “But you’ve gotta just trust your ability.” – Those are comments from Cubs outfielder Joc Pederson … on his attempts to grow a mustache this month. OK, I kid, I kid. But they could be!

If you look very closely, it’s coming along:

I think Joc Pederson is trying to grow a mustache. pic.twitter.com/6z91FvTr5U

The greatest @MLB mustaches of all time:

That comment was actually about Pederson’s slow start to the season offensively. But as a fellow below-average mustache grower (35 wMG+), I can feel Pederson’s pain. And, apparently, he’s heard the haters: “Don’t come at me like that,’’ he said. “Look at that thing. Sorry, I can’t grow a great one. This is all I’ve got. It’s hard work. It’s there, though. I need the right lighting.”

Even his wife is giving him the business: “She’s on me,” Pederson said with a laugh via the Chicago Sun Times. “I better not go 0-fer.” Or he’ll have to shave it off.

So, while, no, he may not be Andrew Chafin out there in the mustache department, Joc Pederson shouldn’t change a thing right now, because he is absolutely killing it at the plate. Including last night’s two-homer (plus a double) performance against the Pirates, Pederson is slashing .267/.343/.431 for the year, which is 14% better than the league average hitter, tucked neatly between Matt Duffy and Willson Contreras on the Cubs wRC+ rankings this season.

Considering how slowly he started the year, that is a truly impressive turn around. And it really dates back to his return from the injured list.

Before hitting the IL with wrist tendinitis (April 20th), Pederson was slashing just .137/.262/.235 (48 wRC+) with a 32.8% strikeout rate and just one home run. Not only that, but he looked off. It wasn’t just a matter of unfortunate results after good at bats and good contact.

Last night’s extra-base binge was especially good to see: “I was hitting some balls really hard for a while and nothing was going in the air,” Pederson said, per Cubs.com. “Just some singles. But it is what it is. I didn’t want to go up there and try to do more and get away from what was being successful. Just trust that it’s gonna come in time. You can’t really force anything in this game; it kind of will tell you when it’s the right time to do it. Just gotta be ready to capitalize.”

Coming off the injured list, Pederson had 11 singles before his first extra base hit (a double in the 6th) and 20 total hits before his first home run. So while he was certainly still producing early on, we know Pederson has legitimate pop and it’s good to see that coming back.

And it’s not particularly difficult to see why he’s been successful overall: 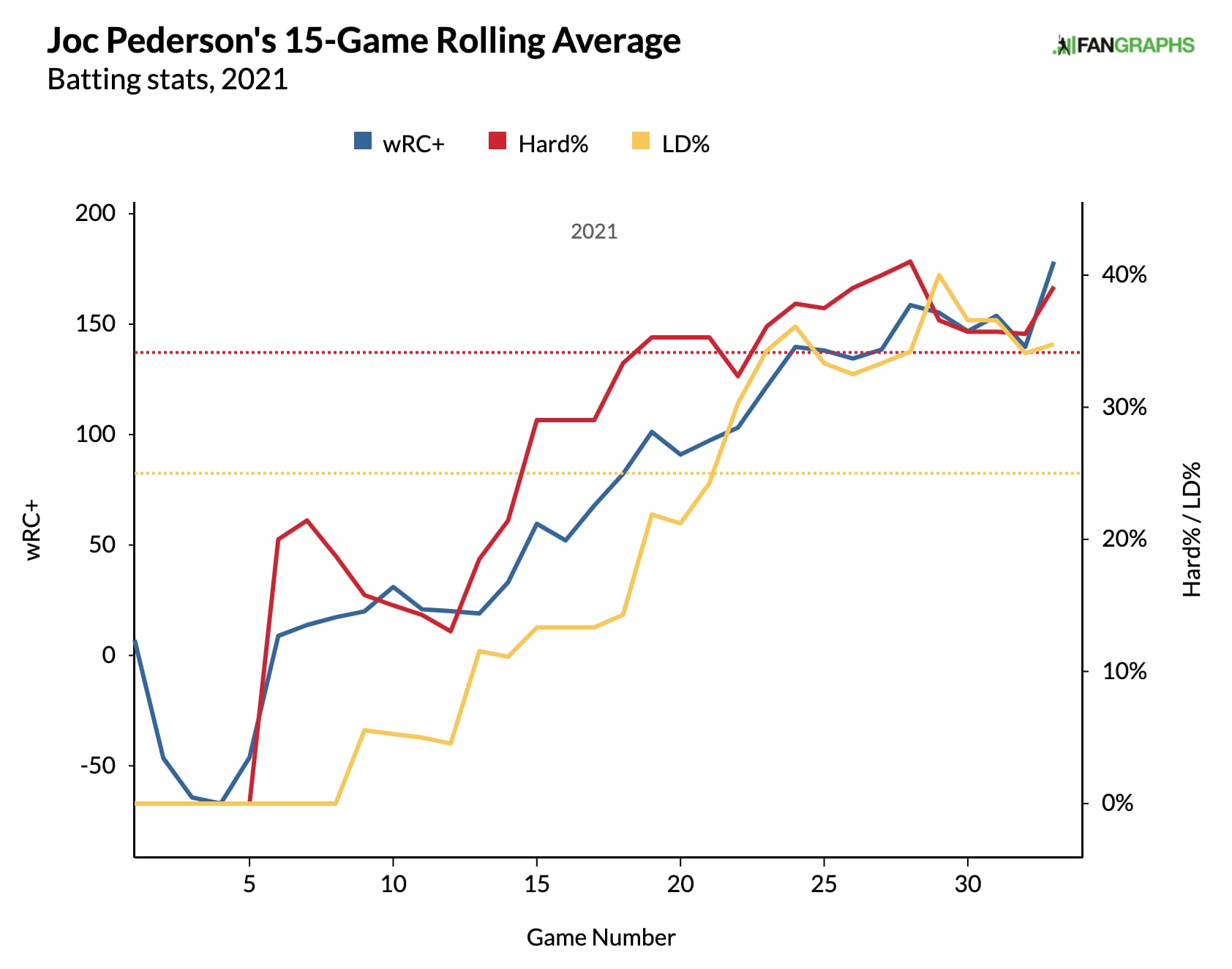 He’s even handling fastballs better than he ever has, which was one of the reasons the Cubs brought his bat into the fold this offseason in the first place:

Joc Pederson on his plans for the mustache after a 2-HR game:

"I need to dye it, I think. That would be next. Then you could see it – the couple prickles I got.”