Hitter-Friendly Coors Field? No Big Deal for Justin Steele (I Didn't Plan for That to Rhyme) Skip to content

Was I a little worried about Justin Steele’s start last night against the Rockies at Coors Field? Yeah. More than a little, actually. That park is a terrible place for pitchers, especially younger guys without experience in that setting, the Rockies had been hitting lefties well this year (and had faced a lot of them), and Steele has taken on an outsized importance to the rotation in the temporary absence of Wade Miley, Adbert Alzolay, and Alec Mills. I just didn’t want his confidence shaken after a solid regular season debut against the Brewers.

Darth Vader would have found my lack of faith disturbing.

Justin Steele was great last night, even better than his final line would suggest. So we’re gonna give him some love today. Here’s a look at his start via Cubs.com:

A couple of notes on his numbers there: The two walks came at the very end of his outing, when he was pretty clearly fatigued (more on that in a second), and the two runs scored after he left the game. And while we’re not going to lay his runs on the doorstep of Ethan Roberts, Steele’s reliever, the first four batters after Steele left the game went line drive single, line drive double, walk, walk. Point there being his final line could have pretty easily looked a lot better than it does.

And circling back to that fatigue – Steele had to throw an extra 9 pitches in the first when a Jonathan Villar error extended the inning, and worked around another error in the fourth (the miscommunication between Seiya Suzuki and Nick Madrigal, that wasn’t actually scored as an error, but probably should have been). Throw in the fact that he also could have been pitching with an even greater lead if the dual running errors didn’t cost the Cubs a run and, well, yeah, I can see that outing looking even better than it already does.

This is all just regular baseball stuff every pitcher deals with – so take this as less of an excuse and more of just important context I didn’t want to leave out for those that missed the late game.

Now back to the numbers.

Be it by design or feel/adjustment, Steele relied almost exclusively on two pitches last night, his four-seamer and his slider; Statcast logged just one other pitch, the curveball, thrown exactly once the entire game (my memory seems to recall at least 3 curveballs, but the broader point remains). By contrast, in his first start of the year against the Brewers, Steele threw five sinkers, four curveballs, and a changeup in addition to his four-seamer and slider. Obviously, that’s still a four-seamer/slider heavy approach, but still a huge difference. I haven’t seen any comments on Steele for the change, though I’m guessing it’s due to breaking balls not quite breaking normally in Denver.

Steele came out of the gate throwing his four-seamer HARD, maxing out at 95.4 MPH, while throwing 10 others over 94 MPH through the first two innings alone. After that, his velocity (and command) started to drop, though that’s to be expected: 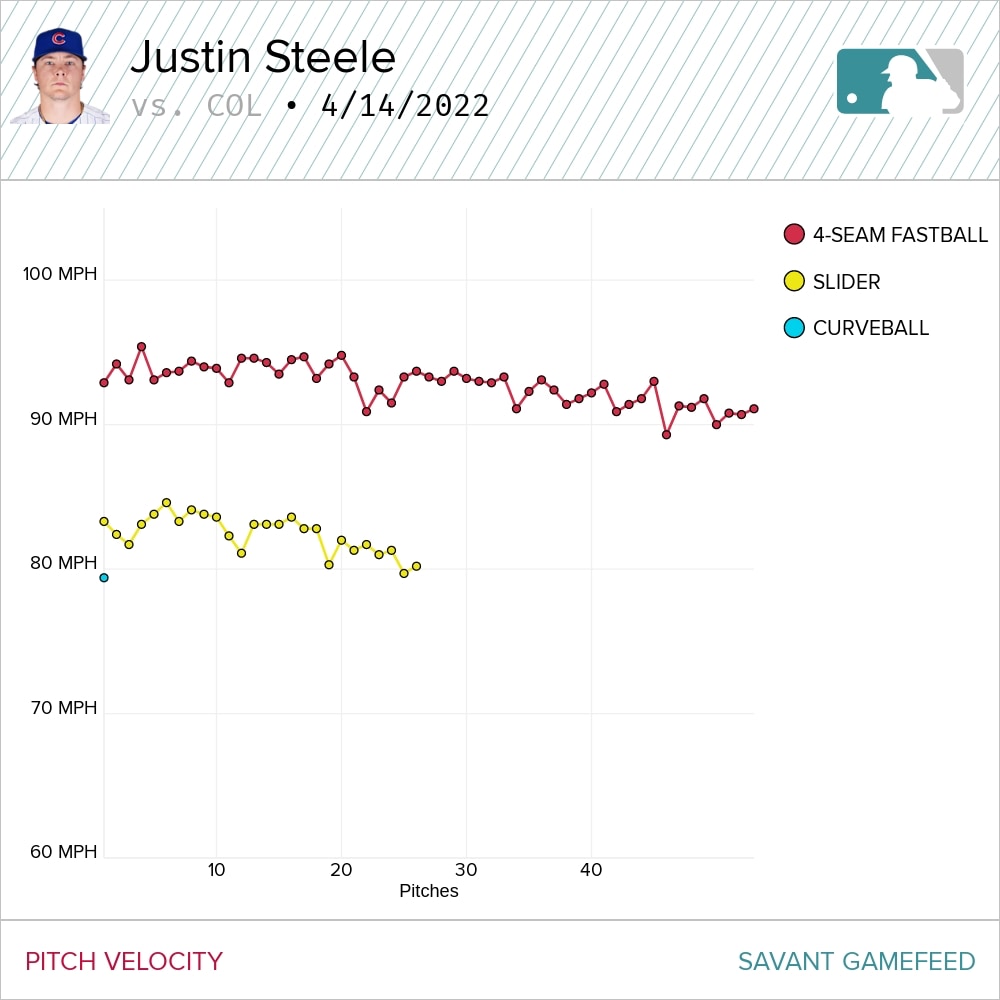 But for as nice as it was to see him light up the radar gun so early in the year, Steele’s slider stole the show. He threw 26 of them total, netting five whiffs, 3 called strikes, and 6 foul balls. Only one slider made it into play.

I mean, just check this guy out. Filthy.

Steele also managed to draw more than his fair share of ground balls for the second straight game, and limited the hard contact to just 35.7% with an average exit velocity of 87.8 MPH. The MLB average for starters this season is 40% hard-hit rate with an 89.2 MPH average exit velocity.

So to wrap it up – Justin Steele walked into one of the most hitter friendly ballparks in North America, against a team that had seen the 3rd most left-handed pitchers this season (and had hit them extremely well to that point), pitched around some early errors, and held the Rockies to just 2 runs over 4.1 innings with 7 whiffs, four strikeouts, plenty of weak contact and groundballs, all while using just two of his five pitches. And he looked good doing it.