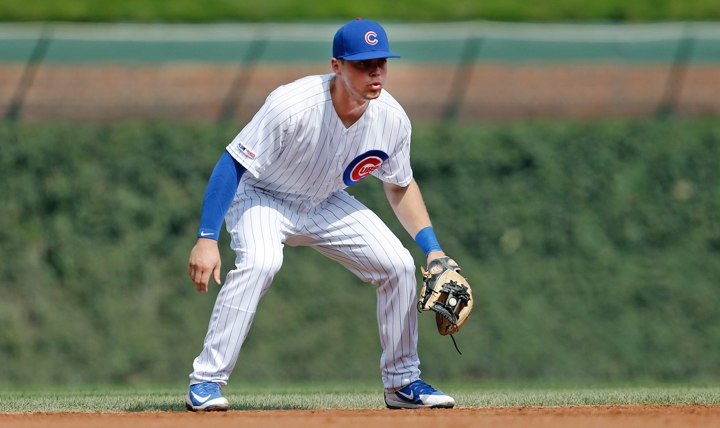 The Cubs shift a lot. A whole lot. It’s not something I’ve noticed being out of the norm for the Cubs this year, primarily because the Cubs had become so UN-shift-oriented by the end of the Joe Maddon days (ironic, since he was one of the pioneers of the extreme shift). So when David Ross took over, I felt like the Cubs became really shift-oriented again, and thus I didn’t really notice it this year.

But they’re way up there:

Some sweet graphs today about the Blue Jays: https://t.co/0ATT6Pg1Dm pic.twitter.com/w18mdINtsm

That FanGraphs piece is about the Blue Jays, who are EXTREEEEEME in their shifting in all phases of defense, including a load of four-man outfields. The Cubs aren’t in that tier – no team is – but they’re pretty clearly in that next tier with the Mets, Marlins, and Dodgers (and then there’s a drop-off). For the Cubs, most of their shifting takes place on the infield, but they’re still in the top 10 in outfield shifts, too.

It also doesn’t guarantee above-average results. If your base talent level on defense is really, really low, then a whole lot of extreme shifting might simply make your team defense “putrid” instead of “historically bad.”

Which is all to say, I don’t have a dramatic conclusion here about the Cubs being in that upper-tier of shift volume. It might be a good thing when all is said and done, and it might not. (Depending on your metric of choice, the Cubs overall rate around middle of the pack in team defense so far, or slightly below (or, in the singular case of Defensive Runs Saved, the Cubs are just about the worst defense in baseball; the data is still pretty noisy this early in the season, even at a team level).)

I tend to think, for the Cubs, they are shifting more than most because (1) is is a heavy organizational philosophy, (2) their overall defensive skill level is not elite, so they’re trying to hide some range issues, and (3) their pitching staff is heavy on contact so there’s even more focus on optimizing defensive positioning (even at the risk of chapping your pitchers).

This is all probably just something to watch as we go forward: does the Cubs’ heavy volume of extreme shifting seem to be helping them more? Hiding some individual warts?

… and is it going to be a particular probably for them if extreme shifts are banned next year?