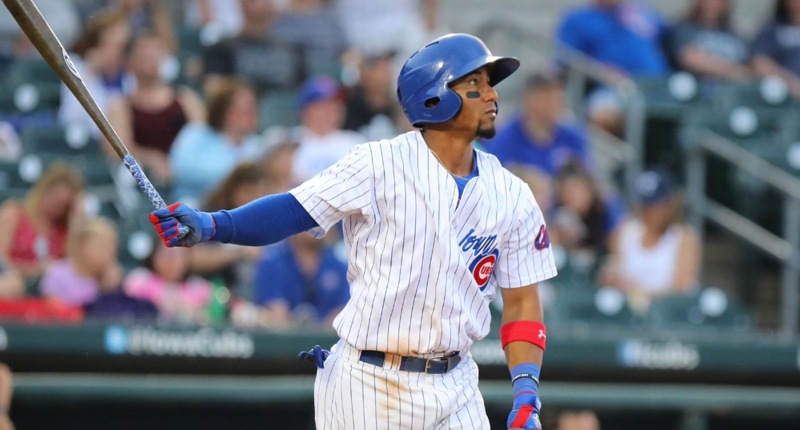 Yesterday, 2021 Royals first-round pick Frank Mozzicato, the seventh player selected in the entire draft, made his professional debut against the Myrtle Beach Pelicans. It’s always weird for me now when good prospects from other organizations play against a Cubs affiliate. I can’t really turn off the part of my brain that evaluates, but I’m also keenly aware that my mind does the trick of looking for points of optimism in Cubs prospects while finding the flaws in everyone else. A worthy reminder that I’m a fan and far from anything resembling a scout.

That said, Mozzicato is fun, and you certainly have my respect pitching three scoreless innings against this Pelicans offense. He’s a high-waisted and athletic 6-foot-3 build, with easy 95 mph velocity and good ride from the left side. The curveball is a tweak or two away from plus, with the changeup still pretty fringy. The feel was really impressive for a teenager.

Okay, enough Royals already. Let’s break down the day in the minors for the Cubs …

Honorable Mention: Myrtle Beach outfielder Jacob Wetzel reached five times — including four walks — raising his wRC+ back over average to 109 … In my revised top 10, I said Owen Caissie seemed more timed up recently. He’s 9-for-20 at the plate since then … If the list went to to six, I’d have included the job that Luis A. Rodriguez and Dalton Stambaugh did yesterday as southpaw piggybackers. Good to see Stambaugh have success after the jump to AA, and Rodriguez is a guy I need to dive more into soon, because he’s having such a weird season: 1.37 ERA, 12.8 K/9, 8.7 BB/9 … Kevin Made really looks good this year. He missed out on that revised top 10, but he’s right there in the 10-12 range, and rising.

I wrote a thread on Twitter yesterday about which prospects might follow Hughes/Morel to Chicago, and within it mentioned three Iowa Cubs relievers: Erich Uelmen, Brendon Little and Ben Leeper. Wouldn’t you know, those were the same three arms that Marty Pevey entrusted to finish Luke Farrell’s gem yesterday. Some notes on each …

Uelmen: Worked quick and clean sixth with the good, low-slot fastball-slider combination. In the seventh, Uelmen seemed extremely committed to throwing lots of changeups, which is fine,

Little: Touched 96 in this outing, his highest velocity since returning from the elbow stress fracture. But I have not found the slider to be as good in 2022 as it was in 2021 quite yet. Still working his way back, but I can see it all coming together this summer and Brendon finding his way to Wrigley.

Leeper: In a really good place lately, seemingly up 0-2/1-2 every time, and finished this outing with a perfect 88 mph slider just off the outside corner.

I don’t have a ton of additional color for this section, but I’ll point out that since I wondered if Bryce Ball would make the adjustment to start drawing walks when the early-count cookies stopped getting thrown his way, he’s drawn five walks in his last four games. Last 20 games: .380/.449/.696, six homers, ten walks, fifteen strikeouts in 89 plate appearances.

Onto the highlights of these bombs:

Second home run of the season for Felix Stevens is a two-run shot to tie the game 2-2 in the top of the fourth. #MBPelicans pic.twitter.com/EBYe3MSuyE

Pete’s first slump of sorts lasted all of six games (5-for-25), posting his fourth three-hit game of the season in this one. First pitch of the game from Mozzicato, a high-and-inside left-on-left fastball, and Armstrong hits a hard grounder into right for a single. Plays with a hard-to-replicate energy and readiness.

But this is my first chance this season to talk about Mora, the 22-year-old second baseman from Mexico that hits everywhere he goes. This three-hit effort raises his season wOBA to .393; he’s been over .380 at every single stop. Mora is listed at 5-foot-9 and 176 pounds, but the lower half is thickening as he ages, which has me wondering if a catcher conversion would be possible down the line (I’ll have to keep note of his arm strength in the future). There’s really good bat-to-ball skills here, a quick bat and flat attack angle that allows him to make contact with any pitch. We’re not talking about a ton of upside, but the plate approach will be enough to reach at least the high minors.

9 up, 9 down, with a ridiculous 12 swings-and-misses on 28 total strikes in his three perfect innings. This was Palencia at pretty close to his best right now, really managing the run on his fastball in a controlled way, trusting he can beat hitters inside the zone with the pitch. The iteration of the breaking ball last night was tight and firm, and good enough to lay waste to 2021 breakout-guy Joe Gray Jr. in their lone meeting.

Aliendo and Palencia were committed to the changeup against lefties, which showed about average, with one plus version coming in the third inning (you’ll see that in Trevor’s second tweet below). He really has to finish that pitch to get the fade that’s possible and properly tunnels off the fastball’s horizontal movement, sometimes it’s left up and glove side.

South Bend manager Lance Rymel seemed to make a pretty conscious decision to take Palencia out early (just 48 pitches), to allow the successful outing to serve as a confidence-builder for his next outing. I like that.

These were my two favorite pitches of the entire outing. An 0-0 changeup to a lefty and a 1-0 breaking ball to a righty. pic.twitter.com/QyOj0u6ilK

It’s just absurdity. Three more hits last night raises Robel’s batting average to .326, including a .383 number in May. Two extra-base hits raise the slugging to .737. And another home run means that Robel now have SEVEN in his last eight games. It’s the hottest power streak I’ve seen since, well, Robel Garcia in 2019.

But any of us that saw Garcia’s ascent that year end with a thud in the Majors is going to bring some level of cynicism about what’s to come. I get it, and I have my own. But not everything in the minors needs to have a Major League meaning or clear future. Sometimes it’s just fun to have the hottest hitter in the upper minors in your organization.

Now I could argue that the Cubs might as well see – while Frank Schwindel, Jonathan Villar, and/or Patrick Wisdom struggle – if they can capture some of Robel’s lightning in a bottle, but I wouldn’t be particularly invested in it. Call him up, or let him win International League MVP, it’s all good with me.