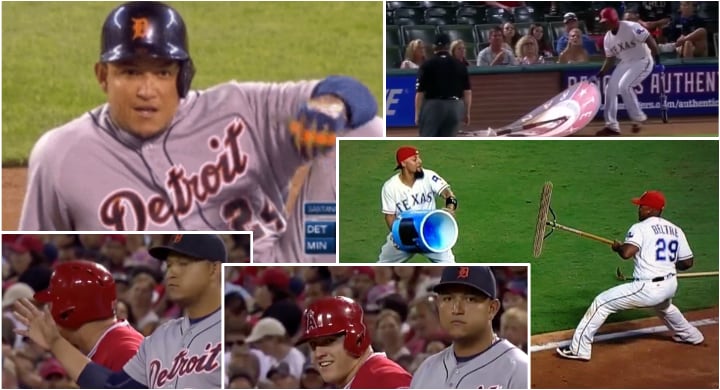 Adrian Beltré and Miguel Cabrera will eventually be remembered for their production on a baseball diamond – and not their contributions to the world of comedy (probably with Hall-of-Fame enshrinement in Cooperstown before too long) – but man these guys were/are funny whenever on camera. The only thing I can’t decide … who’s funnier?

Before I saw this Tweet from the Tigers earlier today, I would have definitely gone with Adrián Beltré (dude was a straight-faced jokester 100% of the time), but now I’m not so sure.

The best of Miggy being Miggy.
pic.twitter.com/4gV78FqqR3

My favorite moment? Swinging *and* connecting at the intentional walk pitch for an RBI single. That’s an all-timer right there.

But don’t sleep on … Adrian Beltré:

I mean, this guy is just an all-time comedian. I really don’t know if there’s a wrong answer, but I’m sticking with Beltré for now.

As for the stats, well, if you value a little added defensive value, Beltré’s 5 Gold Gloves and 14 more career WAR probably play a role, but Cabrera will surpass Beltré on home runs soon enough and also has 2 MVP awards, 3 more Silver Sluggers, and 7 more All-Star appearances.

Honestly though, it doesn’t matter. These guys are both all-time ballplayers and all-time comedians. They made/make the game of baseball so much more enjoyable and stood out among their peers along the way. I’m just happy I got to see both of them play.