This Better Not Be the Offense: Packers 10, Bears 3 Skip to content 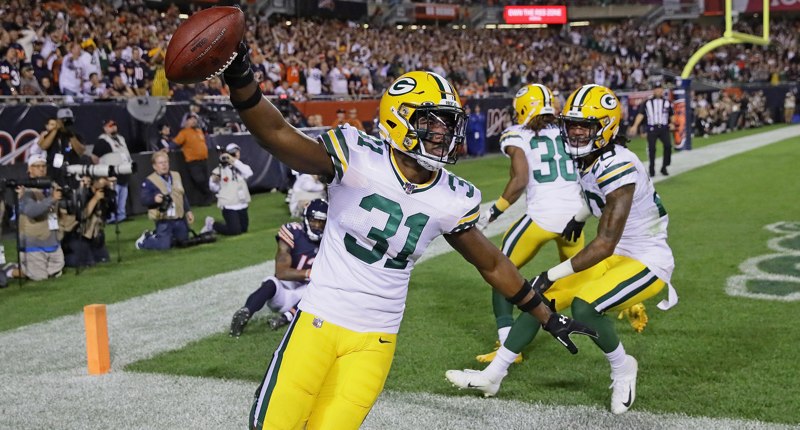 I didn’t think you could script a worse opener for the Bears than last-year’s lead-lifter against the Packers. But it turns out I was wrong. Very, very wrong.

Taking a 10-3 loss to the Packers at home takes the cake, especially because of how it played out.

The offense looked lethargic and out of sync. It moved without rhythm and purpose, which is troubling for so many reasons. Among them, Head Coach Matt Nagy having seemed to hint at quarterback Mitch Trubisky being better at playing with pace after playing through the first full year in his system, continuing to work at it throughout the offseason training program, and in training camp.

And just when you thought Trubisky was on the cusp of turning the corner with a fourth-quarter scoring drive, he throws an interception that was caught by ex-Bears safety Adrian Amos that served as a dagger. If shades of Jay Cutler’s Bears debut danced in your heads after that one, just know you’re not alone.

To say penalties mucked things up for the Bears would be doing a disservice to understatements. Chicago committed 10 penalties for 107 yards. Green Bay used two of those penalties to gain first downs. The worst of it came when the Bears were tripping over themselves to commit penalties, turning a first down situation in Packers territory into a 1st-and-40. Yes, you read that correctly. First down, with 40 yards to go to move the chains. I don’t think NFL Blitz even had a play designed to get a first-down in that particular situation.

The offensive line seemed overwhelmed at times by the Packers, leading to a shorter clock for Trubisky, less push for the running backs, and a trio of holding penalties.

At least the defense looked good, right? That unit played like it was shot out of a cannon with its hair on fire. I can’t put it in any other way that would give it justice. Hyperbole is the only way to describe how well that group played, particularly in the first half. The Bears defense limited the Packers to 213 total yards and 3.7 yards per play. They sacked Aaron Rodgers five times and were credited with quarterback hits on seven other occasions. Unfortunately, for as good as the defense was, the offense was that bad.

This isn’t going to be the offense … is it? Just 11 carries for 37 yards from your running backs. Cordarrelle Patterson (1) out-carried Tarik Cohen (0) on Thursday. What’s up with that? David Montgomery touched the ball just seven times.

And then there is Trubisky. My goodness. It’s really hard to imagine a worse season-debut for QB1 who is in year two of his system and aiming to show folks he’s taking that step forward. He looked shaken and rattled, and an improved Packers defense rolled through him. Outside of Allen Robinson, the Bears passing game looked non-existent. Seriously, this better not be the offense. If it is … and if this defense is squandered … you know what, I’m not sure I want to complete that sentence right now.

The Bears self-destructed in front of a nationally televised audience in what was supposed to be a coming out party for an improved club. There are now 10 days to pick up the pieces and sort things out, which leaves us more than enough time to put the murmurs and grumbling into coherent words for you to digest. Until then.