Brandon Marshall: Jay Cutler Was "Bad" Because He Lacked Leadership Skip to content 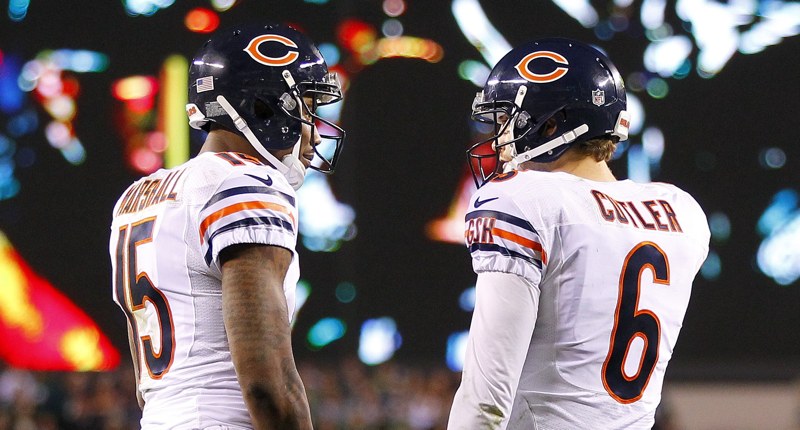 The Jay Cutler-Brandon Marshall bromance was so strong at one point, the Chicago Bears engineered a trade with the Miami Dolphins just to get the two ultra-talented football players back in the same huddle.

Indeed, Cutler had some good times throwing to Marshall, a big-bodied receiver who hauled in all sorts of throws from his quarterback. And Marshall arguably had his best years with Cutler throwing him the football. But when given a chance to dish on his ex-teammate, Marshall (who has never been one to keep a private thought to himself) went in on Cutler.

“I had to be the company guy with Jay Cutler,” Marshall said on ESPN’s “First Take” program. “Now I can talk real. Jay Cutler was bad.”

Wait … how was Cutler bad?

“Just leadership,” Marshall explained. “He can make every throw. He is one of the smartest guys I’ve ever been around. But it comes down to this heart right here, and leadership galvanizing the team.”

Marshall raved about the leadership qualities that Eli Manning and Russell Wilson had when he played for the Giants and Seahawks, but knocked Cutler with examples of times the quarterback showed frustration with his receivers after not making plays. He even went as far as to say players would play hard for Ryan Fitzpatrick, a quarterback who Marshall played with while he was with the Jets, because of his leadership capabilities. Essentially, Marshall was  insinuating players wouldn’t do the same for Cutler as they would for Manning, Wilson, and (seriously!?) Fitzpatrick.

I’m not sure which is less surprising: Cutler being labeled a bad quarterback because of unquantifiable leadership abilities or Marshall going hard after a former quarterback.

The 2019 Bears have quarterback issues of their own, but leave it to Marshall to bring Cutler’s name into the spotlight one more time.