The First-Place Bears Are Back: Bears 16, Vikings 6 Skip to content 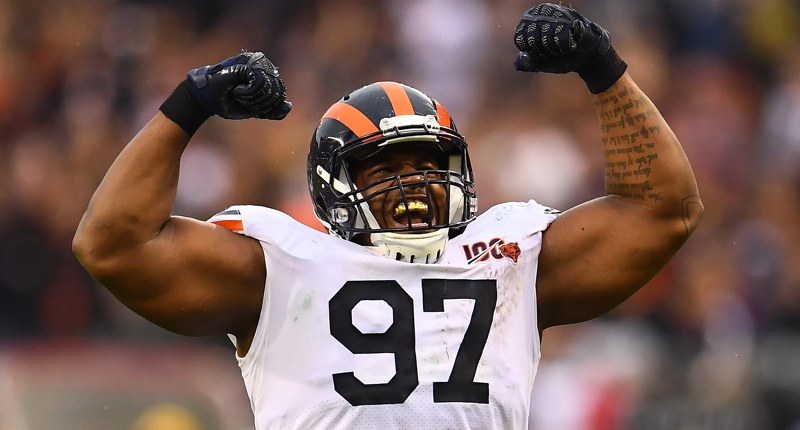 The Bears got home to the Vikings quarterback with six sacks and six more quarterback hits. A relentless pass-rush tag teamed with a ferocious run defense to put the clamps on Minnesota’s offensive attack, limiting them to a garbage-time fourth-quarter touchdown in a 16-6 win that lifted Chicago from a third-place tie to being knotted with Green Bay at the top of the division.

And while the cliché of a team win gets thrown around a lot, but it rings ever-so-true in the Bears’ Week 4 dismantling of the Vikings. Chicago won without Mitch Trubisky, Kyle Long, Taylor Gabriel, Akiem Hicks, Bilal Nichols, and Roquan Smith, which is a testament to the players who pushed the team to win by filling in remarkably for the fallen Bears.

Chase Daniels orchestrated a touchdown drive out of the gates after Trubisky was sent to the locker room with a left shoulder injury, then did enough to keep the offense afloat and the defense off the field for more than it had to be on Sunday.

Ted Larsen and Rashaad Coward (who was Larsen’s injury replacement) held it down on the front lines with Long out of action.

Javon Wims and Anthony Miller scooped up reps left behind by Gabriel and picked up some clutch yardage along the way.

Nick Williams and Roy Robertson-Harris made their presence felt by shoving Cousins into the Soldier Field turf early and often.

Nick Kwiatkoski, who replaced Smith in the starting lineup, literally resorted to using Dalvin Cook against Cousins in a situation where he was blitzing to pressure the quarterback.

It was a complete drubbing, even though the final score and 10-point spread suggests it was closer than my portrayal of the situation. Because had the Bears ran circles around the Vikings despite playing it close to the vest in the second half while protecting a delicate situation where there was no backup to the backup quarterback.

It would be unfair for me to get this far without mentioning how the stars showed up for Chicago, which was as impactful as the bench squad rallying its troops to secure a win.

Khalil Mack continued his ownership of Cousins with 1.5 sacks, a quarterback hit, and a forced fumble.

Tarik Cohen scored the only touchdown of the game on a reception thrown by Chase Daniel.

Ha Ha Clinton-Dix came up with another turnover.

Allen Robinson caught everything thrown in his direction and finished with a seven-catch, 77-yard game.

Meanwhile, Minnesota’s stars were muzzled. Cousins, Cook, Adam Thielen, and Stefan Diggs were non factors. Harrison Smith was unable to come up with a turnover. Anthony Barr didn’t even really cross my mind. Things lined up for Minnesota to sneak out of Soldier Field with a win … and they never got it in gear.

The Bears have a slew of injury-related questions to answer this evening and in the days leading up to when they leave town for London. But for now, breathe it all in. The Bears are 3-1 after this win and are jockeying with the Packers for first-place supremacy in the NFC North because of their defense and depth. It wouldn’t be Bears football if it was getting done in any other way.