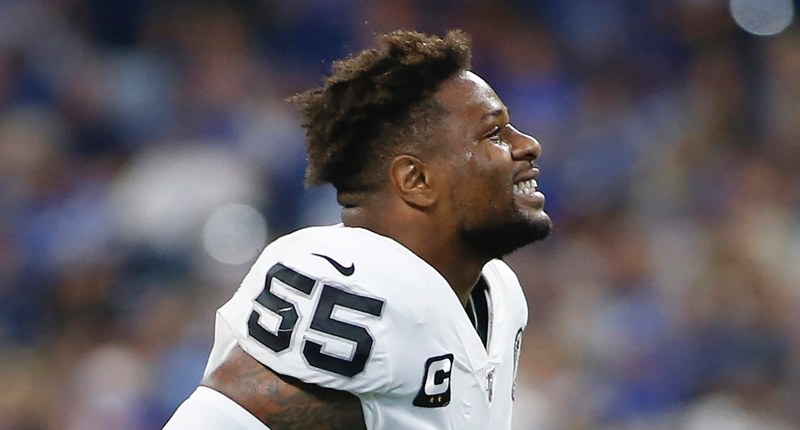 One of football’s most ferocious pass-rushers won’t be squaring off against the Bears this week.

Raiders pass-rushing outside linebacker Vontaze Burfict has been suspended for the remainder of the season one day after being ejected following a vicious helmet-to-helmet hit on Colts tight end Jack Doyle.

You can check it out below:

Burfict’s hit on Doyle resulted in an ejection, and has apparently pushed the NFL to draw a line in the sand regarding a player who has a long-standing history of hits that cross the line.

Seriously, the number of violent hits, fines, and suspensions Burfict has compiled over the years is nothing short of alarming.

Vontaze Burfict has now been suspended four times for a total of 22 games, costing him $4,622,182 in salary and been fined nine other times totaling $411,064. Over $5M lost for unacceptable on-field actions.

ESPN’s Jeremy Fowler reports that Burfict is on his way back to the states to appeal the suspension, which could be heard later this week. Burfict had already flown with the Raiders to London ahead of the team’s game against the Bears on Sunday. The defense for Burfict will likely come from his agent Lamont Smith, who told ESPN reporter Josina Anderson that he believes the suspension (which would be 12 games) is “excessive” and that the play above that led to the suspension was “a football play.” Bold strategy, Mr. Smith. Let’s see how it plays out.

At minimum, the NFL has finally sent a right message that Burfict’s behavior will no longer be tolerated without him facing strong disciplinary action. And even if Burfict’s representation can trim a game or two (or more) off the suspension, the NFL’s words are coming across clearly — enough is enough.