Neat-o: The Rams Sent Marcus Peters to the Ravens in a Mid-Season Trade Skip to content 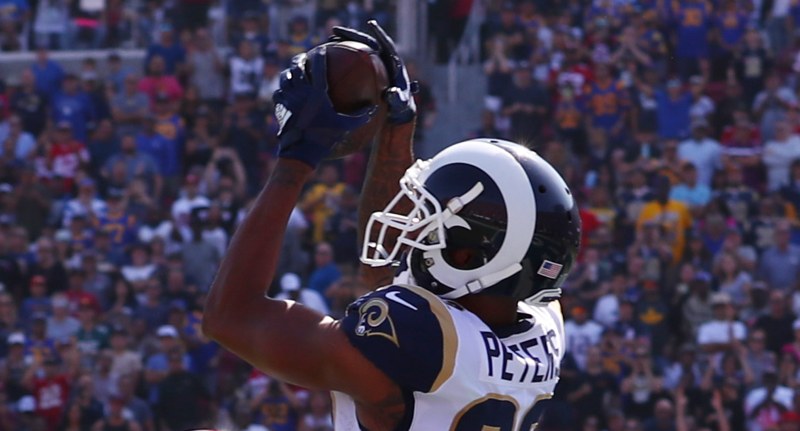 The Los Angeles Rams and Baltimore Ravens linked up on a rare mid-season trade on Tuesday afternoon.

Check out the details from each team’s perspective:

We have acquired Pro Bowl CB Marcus Peters from the Rams for an undisclosed draft pick and LB Kenny Young. pic.twitter.com/qEsyDTvelp

The @UCLAFootball kid is back in LA.

Welcome to the squad, @KennyYounggg!

The Rams traded two-time Pro Bowl cornerback Marcus Peters to the Ravens. In return, the Ravens sent second-year linebacker Kenny Young and an undisclosed pick in the 2020 NFL Draft to the Rams.

It’s not every day you see a Pro Bowl cornerback (and 2016 All-Pro) sent packing. And it certainly wasn’t expected, especially after the team recently placed its other starting cornerback (Aqib Talib) on injured reserve. This noteworthy deal comes nearly a month before the Bears travel to Los Angeles to face the Rams on November 17 in a game that is tentatively scheduled to be on Sunday Night Football. Surely, Mitch Trubisky, Allen Robinson, and the rest of the Bears’ aerial attack won’t miss seeing Peters and his 24 career interceptions lurking in the secondary come November.

This marks the second time Peters has been traded in three years. It would be unfair to speculate about things happening behind the scenes, but something doesn’t feel right. Though I suppose this trade could have been executed – from the Rams perspective – in an attempt to create some salary cap space. Trading Peters opens up an estimated $9.069 million, according to OverTheCap.com. Entering Tuesday, Los Angeles had just $3,349,957 in available cap space, and only the Cardinals, Patriots, Giants, Falcons, and Vikings had less. So between clearing cap space and adding a UCLA product still on his rookie deal to the group of linebackers, the Rams received something nice in a deal (even if it comes with rolling the dice without your team’s two Week 1 starting corners).

As for the Ravens, this deal is a no-brainer. Adding a Pro Bowl corner to what appears to be a playoff-ready roster makes all the sense in the world, especially knowing Baltimore could see some high-powered passing offenses down the road. And at the cost of a second-year linebacker and a future conditional pick, it is a win-win situation.

The NFL has seen an increase in trades in recent years, so perhaps the Peters deal is what will get the ball rolling before the 3 p.m. CT trade deadline on October 29 comes.