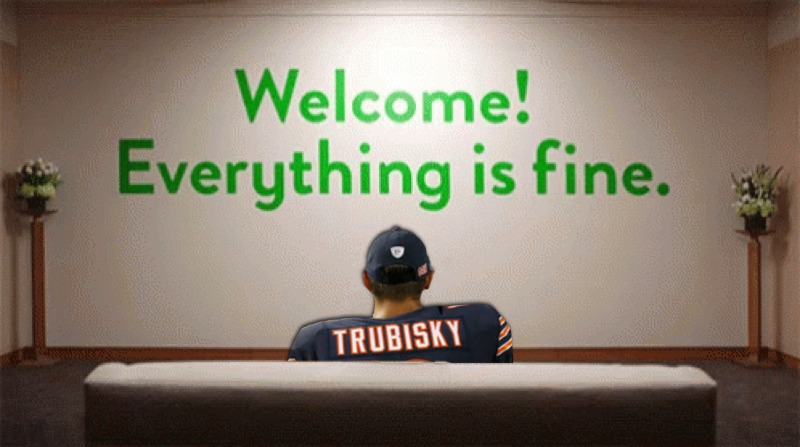 Week 9 of the NFL season is here and the Chicago Bears (3-4) find themselves in last place of the NFC North and among the most disappointing teams in the league.

Things could be going better for Chicago’s football team, to say the least. A prolonged winning streak starting Sunday against the Eagles would go a long way toward making me feel better, but yeah … it has not been the season I thought or hoped it would be.

But before we get to assessing the Bears’ playoff hopes, let’s look at the standings heading into this week’s games:

It’s wild to think about how the Bears started October with the same record as the Packers. Now, we are more than one month since the team’s last win, and the Bears are looking at ridiculously long odds to make the playoffs.

Matt Nagy showed his team a powerpoint about the Washington Nationals starting this season 19-31 and going on to win the World Series.

Nagy: "How do you not show that to your guys and let them pull from that?"

If the Nationals can from 19-31 to win the World Series, and the Blues can go from being hockey’s worst team (and annual punchline come playoff time) to winning the Stanley Cup, then these Bears could make the playoffs. Right?

A look from Football Outsiders:

The Bears have less than a 1 percent chance of repeating in the NFC North. And it’s not as if their overall playoff odds are much better. Football Outsiders’ playoff probabilities have the Bears with just a 4.9 percent chance at making the postseason in 2019. Or to put it another way, the Bears’ odds have dropped by 24 percentage points in the last two weeks. Yikes!

With the division virtually out of play, the time is now to highlight the Bears’ 4.1 percent probabilities of getting one of the NFC’s two wild-card spots. If you think those odds are slim, then this list of teams who have better probabilities than the Bears to get a wild-card slot isn’t going to help.

Check out the latest from FiveThirtyEight, which has often painted a slightly more optimistic picture:

Even FiveThirtyEight dropped the Bears’ postseason probabilities behind the Lions. That’s how bad losing to the Chargers was for Chicago’s playoff future.

The Bears’ current playoff roadmap is falling apart and fading to the point where it is getting tough to see. A win against the Chargers would have put the Bears in a better position to make a playoff push, despite their glaring problems. Instead, the crawl to get back to the .500 mark begins on Sunday.