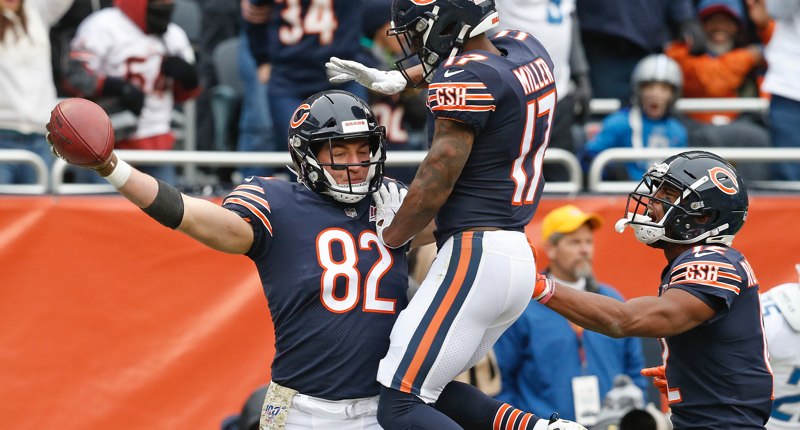 Thank goodness for the Lions.

The Bears have been mired in a losing streak. Their quarterback’s future has come into question (and then some). His head coach has been under fire. And everything the team had been building toward had come unglued in the span of a few weeks. But if only for one moment, the Bears were good enough for enough plays to win a game.

Again, thank goodness for the Lions, who were without starting QB Matt Stafford.

Mitch Trubisky threw touchdown passes on three consecutive possessions that spanned the end of the second quarter and start of the third to engineer a come-from-behind 20-13 win. That middle-game heater was the best Trubisky had played all year, as he threw with confidence and conviction against a Lions defense that provided little resistance. Frankly, Trubisky’s numbers (16/23, 173 yards, 3 TD, 131.0 quarterback rating) could have (and arguably should have) been better with some better play calls and execution elsewhere.

HOWEVER, this isn’t the time for that breakdown. Instead, this is a moment for celebration. Rejoice, friends. The Bears won a football game! Break out your happy dances and raise your fists in triumph!

The offense did enough to win. The defense held up its end of the bargain. And it all added up to a close win against a team that started its backup quarterback on short notice. It wasn’t pretty, but there are no bonus points for winning glamorously. And in the end, the Bears are out of the NFC North cellar. Huzzah! It’s something!

Next up, a trip to Los Angeles to play the Rams in primetime. If the Bears are going to put together an unthinkable script for an in-season turnaround, Hollywood feels like a good place to start.