The Jaguars Have Benched Nick Foles ... Which Possibly Puts Him on the Bears' Radar Skip to content 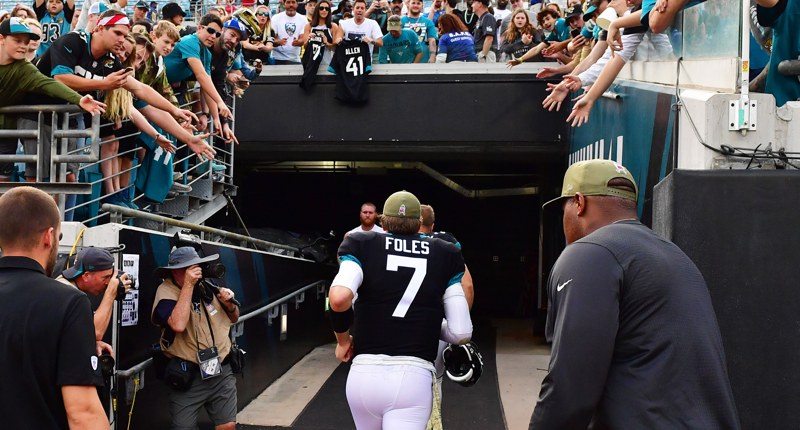 After putting up no points in the first half of a game against a Buccaneers pass defense that is among the worst in football, the Jaguars pulled the plug on the Nick Foles experience at halftime (Michael: And absolutely destroyed my fantasy weekend at the most inopportune time …. but who’s counting?).

And one day after Garnder Minshew II played admirably after intermission, Jacksonville has decided to stick with the change it made on Sunday:

Foles’ production has gotten progressively worse in each game since his return from a clavicle injury that put him on injured reserve after Week 1. After completing 70.2 percent of his passes, throwing for 296 yards, tossing a pair of touchdowns, and posting a 92.2 passer rating in his first game back, Foles has completed just 62.9 percent of his passes, has more interceptions (1) than touchdowns (0), and a passer rating of 72.3 in the following two contests. Evidently, the Jaguars have seen enough of him for now and are OK with moving back to Minshew.

With that being said, let’s keep our eyes on what happens in Jacksonville moving forward. Specifically, let’s keep tabs on what the team does with Foles.

It wasn’t that long ago when Foles was a rumored fit to be a Bears target as an in-season trade candidate. And while the trade deadline passed without movement, it did not silence whispers of the Bears possibly replacing Trubisky down the line. So while I wouldn’t go as far as to vouch for Foles as the solution to the Bears’ quarterbacking issues, I suppose that – at a minimum – Foles could be the type of backup who can mentor Trubisky (much like Chase Daniel does now), but also perform in a pinch because of his knowledge and history in executing within this system. But man … it would be expensive.

The Bears (or any team) that acquired Foles would be handed what is left of a four-year deal worth up to $88 million, which was signed earlier this year. Perhaps that deal could be re-structured, but that seems like a big ask as of this moment. But then again, maybe it isn’t *THAT* bad:

I’ve never been a particularly big Foles guy, but his contract is not bad for an acquiring team in a trade this offseason

In any case, should the Jaguars turn to Minshew for 2020 and beyond, the Bears could conceivably be a team that could acquire Foles in a trade if the market bottoms out. And with his recent troubles being what they are, I suppose the potential asking price could be less this coming offseason than what it was leading up to the 2019 NFL trade deadline.