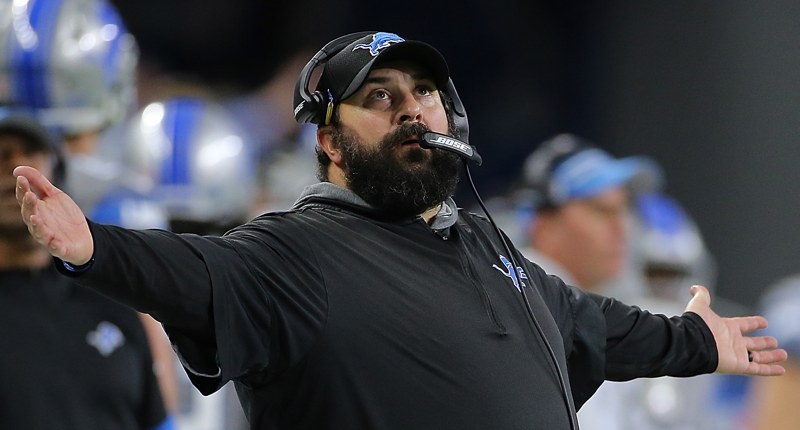 There has been a fair amount of movement throughout the NFC North in recent years, but the Detroit Lions are set to keep on keepin’ on.

It starts at the top, with the Ford family expressing their non interest in selling the team.

Team President Rod Wood told MLive.com that the family has been “approached about interest” in buying the Lions, but there have been no serious discussions on the matter. Further, Wood adds the family has no plans to sell the team and that the Fords have succession plans in place to keep the Lions within the family. This is a franchise that has been in the Ford family sine 1963, and it doesn’t look like will be changing hands any time soon, even if fans are wearing t-shirts begging for change at the top.

Not only are Lions fans not getting desired change in ownership, the football operations power structure is also staying the same:

Lions ownership informed Matt Patricia and Bob Quinn they will return for 2020 today. The expectation is they compete for a playoff spot next year

General Manager Bob Quinn and Head Coach Matt Patricia are staying put in Detroit. And while this might not be popular in Detroit, there is an argument that this is a sensible decision. Because while Patricia’s Lions have just nine wins in two seasons since he replaced Jim Caldwell after a year in which nine wins was deemed to be not good enough, constant turnover at head coach would put the team at risk of being the NFC’s answer to the often bumbling Browns. In that vein, the same can be said for Quinn, who is running the show in Detroit.

On the other hand, the not-so-wise move might have been owner Martha Ford putting the duo immediately on the hot seat after handing them a vote of confidence.

“We expect to be a playoff contender and those are our expectations,” Ford said, via ESPN’s Michael Rothstein. “Which we’ve expressed to both Bob and Matt.”

Putting pressure on the two top football minds behind the scenes is one thing, doing so publicly is another. It feels like 2020 is playoffs or bust for the Lions. So while that might fire up the folks in Motown, pitching free agents on an unstable situation that could change within a year is an obstacle that most franchise’s cannot successfully clear in the free agent market. But hey, you keep doing you, Lions. The rest of the NFC North wouldn’t mind if the status quo reigned supreme for the foreseeable future.