Burrow at His Best, Lawrence Has a Flaw Revealed, Encouraging Lazor Nuggets, and Other Bears Bullets Skip to content 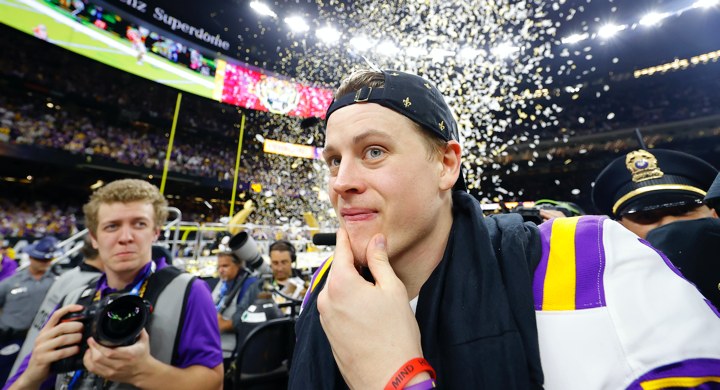 Yours truly had quite the closing day at the ticket window thanks to the way events unfolded during last night’s college football national championship game. But because I was in the air while the game played out, and I didn’t get to see which tickets were winners until after I settled in at home, and I wasn’t able to cash out my winnings. I guess I’ll have to go back to Las Vegas to claim my prizes. Ain’t that a shame?

Joe Burrow delivers his 3rd TD pass of the night, this one to Thaddeus Moss.

Thaddeus Moss, son of Randy, scores his second TD of the night.

Another look at Joe Burrow's fifth TD. Great play by Terrace Marshall to go up and get this one. pic.twitter.com/C74TWYyUn4

Lawrence does this thing at times where he lifts off his feet a bit after stepping up in the pocket before firing one downfield. Throws have tendency to sail. Will need to clean that up pre-2021 Draft.

This is why the Sounds Of The Game feed exists pic.twitter.com/AkhA88PZ0M

Who you got?@ColinCowherd lists 5 reasons why he likes Clemson over LSU to win tonight's National Championship game: pic.twitter.com/FOmtwLfjcF

He actually wasn't bad. When the Bengals were healthy, we had no issue with the offense putting up points. They averaged 31 points and went 4-1 to start last year (threw for 330+ yards in each game).

Bears fans may enjoy this https://t.co/9XFRObXiHY

As @RapSheet reported, Bears hiring Bill Lazor as new offensive coordinator. Matt Nagy had interest in Lazor as OC back in 2018 but Lazor stayed in Cincy. Lazor — out of the league in 2019 — also attended a couple Bears’ OTA workouts this past spring as a guest.