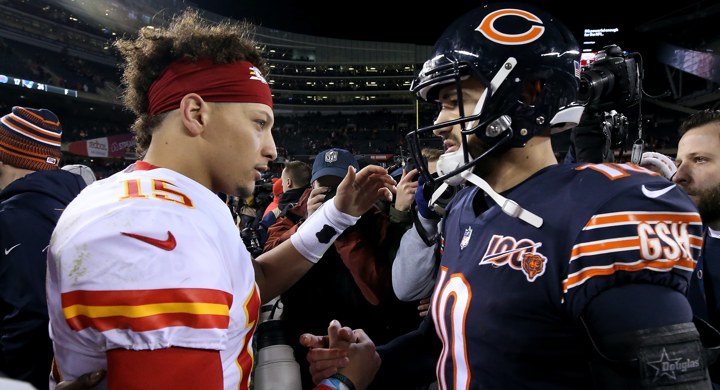 There was a moment in January where I was prepared to dive into a post titled “Meet Matt Kafka, an Option to be the Chicago Bears’ Next Offensive Coordinator.”

But that moment eluded me, as the Bears moved quickly to hire Bill Lazor to replace Mark Helfrich in that role. Even still … I was interested in Kafka, a Chicagoland product who played his college ball at Northwestern, was drafted into the NFL, and looks poised to be one of the next Andy Reid assistants to move through the ranks before eventually becoming a head coach. So with that in mind, I threw myself into Patrick Finley’s Kafka feature at the Chicago Sun-Times.

The man behind the NFL's most important player is a former @NUFBFamily star. On #Chiefs QB coach Mike Kafka and high expectations: https://t.co/UMe9jVYGhO

Kafka is an interesting piece in the Chiefs puzzle. He isn’t quite the man behind The Man (as Reid and OC Eric Bieniemy carry the most in molding Patrick Mahomes), but he is still an integral part of making the thing go. Finley’s story is a good one for some background on Kafka and Mahomes, so I encourage you to read it in its entirety. But there was one quote I wanted to pull from the story, because it related to Bears Head Coach Matt Nagy.

Nagy (as the Chiefs OC) and Kafka (as the QBs Coach) worked together in Mahomes’ rookie season. And it’s clear that Mahomes has some love for what his former offensive coordinator did while they had their time together.

“Nagy was amazing with me and my transition into the NFL,” Mahomes said. “Being able to relate to me, being able to go out there and let me play fast and be who I am.”

Mahomes would go on to talk about how he was glad to have both Kafka and Nagy in the quarterbacks room when he arrived as a rookie. And remember, Mahomes explained that sitting out his rookie year and learning how to read coverages and execute the offense played a role in his early-season success when he was handed the reigns as a starter. This got me to thinking about the Bears’ QBs room, as currently situated.

Mahomes’ words make me feel as if the Bears are well-positioned to fix their quarterback problem. In fact, I am about willing to go out on a limb and suggest that this group of coaches has the capability to right the ship in a variety of ways. I’m not sure I would have felt that way on December 31 when the team fired its offensive coordinator – or even earlier in January when the Bears missed out on hiring Pat Shurmur, their rumored first choice to replace Mark Helfrich.

But between the additions of Lazor and QBs Coach John DeFilippo, as well as the returning voices of Nagy and Passing Game Coordinator Dave Ragone, the Bears have 20+ years of coaching the quarterback position at the NFL level. This isn’t something that should be taken lightly.

Putting new eyes on old problems is a good start in the right direction. And I imagine it helps the new guys to have familiar faces to provide background and perspective on what they’re seeing. The top priority in Chicago is to work out the kinks with Mitch Trubisky. The uneven play throughout the first three years of Trubisky’s career have been problematic, and smoothing it out is one of the hurdles that must be overcome should the team reach the Super Bowl goals that were set after the 2018 season.

But beyond that, the way Mahomes has talked about the value in sitting out and the importance of a good quarterbacks room infers that Chicago is in a good spot should the front office hitch its wagon to a quarterback it would theoretically select in the upcoming 2020 NFL Draft.

Because even as Trubisky enters his fourth year as a starter, there are still question-marks regarding his game and his future. That GM Ryan Pace wasn’t willing to commit to a decision on Trubisky’s fifth-year option when he had been willing to do so (one way or another) in prior situations said a lot about how the administration views its quarterbacking conundrum.

So, yes, Nagy still has something to prove as a head coach. The entire coaching staff should have boulders on their shoulders entering the 2020 season. But there should be good vibes regarding the quarterback incubator at Halas Hall, which seems to be as good as it gets. Because, in the end, if Patrick Mahomes thinks there’s value in a good quarterbacks room, and the Bears have one of the coaches who was in the room that provided a good foundation, then perhaps it means something. I suppose we’ll find out what it means in due time.