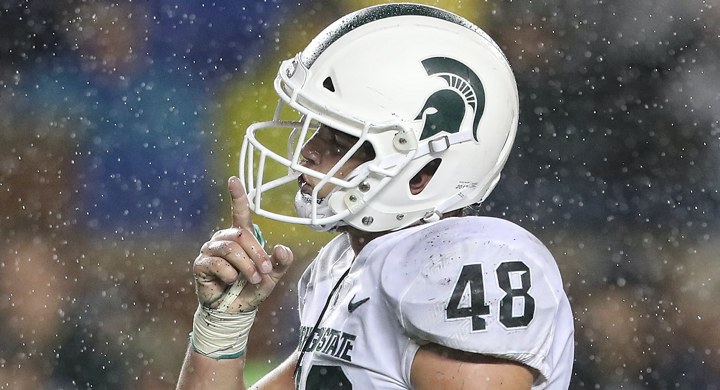 With the NFL Scouting Combine revving up this week in Indianapolis, news of prospects meeting with teams will begin to surface.

Further, now is a time to keep your eyes and ears open regarding prospect meetings that hadn’t been previously reported.

For example, Bear Report’s Zack Pearson and Usayd Koshul interviewed Michigan State defensive prospect Kenny Willekes in a recent podcast. It is an interesting prospect interview, one in which Willekes confirms he met with the Bears during Senior Bowl week.

Willekes was a two-time first-team All-Big Ten member and winner of the Big Ten’s Defensive Lineman of the Year award in 2018 after racking up 8.5 sacks. A year later, Willekes won the Bulsowrth Trophy, which is handed out to the best college football player who started their career as a walk-on athlete. Between the on-field excellence Willekes showed at Michigan State and his ability to grind his way to the top after starting as a non-scholarship walk-on makes him an intriguing prospect.

And that his meeting with the Bears did not surface as news until well after the Senior Bowl is notable, too.

Same can be said about the team’s meeting with safety Kyle Dugger at the Senior Bowl. Dugger, who played his college ball at Division II Lenoir-Rhyne University, confirmed the meeting via Christian Shanafelt. When discussing the Bears’ interest, Dugger told Shanafelt said playing along side some of the Bears’ stars “would be an honor” and that playing with those types of players would elevate his game. For what it’s worth, Dugger’s game is highly regarded at this stage of the draft process.

There isn’t a ton of mainstream information on the Division II safety, but this prospect spotlight by Shanafelt is quite the find:

The Bears could target Willekes and/or Dugger in the second round as possible solutions at positions they could stand to add depth and upside.

Chicago’s edge-rusher vacancies are well known, as the team has just Khalil Mack and Leonard Floyd under contract for the 2020 season. And of those two, Mack is the only one with a deal that extends beyond the upcoming year. So … yeah, Willekes makes sense as a possible target.

The Bears have holes at the safety position, too. Ha Ha Clinton-Dix, Deon Bush, DeAndre Houston-Carson, and Sherrick McManis are set to become free agents when the new league year opens up in March. And after signing Eddie Jackson to a lucrative multi-year extension earlier in the offseason, the Bears would be wise to draft someone who could grow while playing alongside Jackson in the secondary. Finding a complimentary player at the position could keep safety play as a strength of the Bears’ defense.