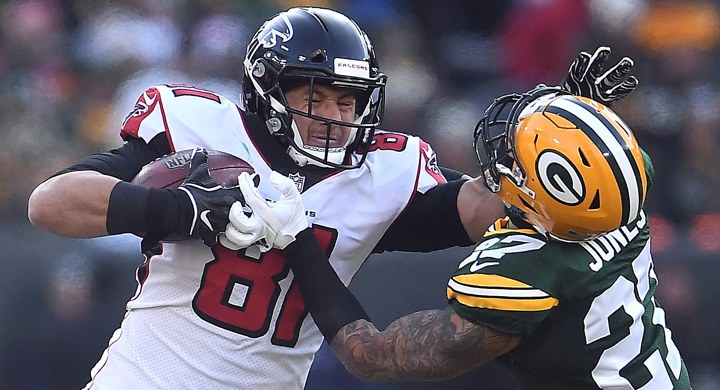 Sure, having Matt Ryan throwing the football helps. But Hooper showed off quality route-running and coverage-reading skills, which allowed him to get open, haul in passes, move the chains, and score touchdowns. And with an 80.5 receiving grade from PFF that ranks seventh among qualifying tight ends, having the eye test match the analytics will likely go a long way toward getting him paid this offseason.

There might be concerns about paying a free agent tight end after seeing Trey Burton’s fall from grace, but the comparisons don’t hold much water. Unlike Burton, who became a hot commodity (in part) because of untapped potential that went unseen because of his place on the depth chart, Hooper’s rise to potential top tight end on the free agent market was a steady one. Hooper has been given an increased snap share and more responsibilities in each season he has been with the Falcons — which ultimately turned into more production. Crazy how that works!

Hooper is PFF’s 37th overall free agent and third-highest ranked tight end. Even still … he’s projected to cash in with a big-time deal that could reset the market at the position.

OverTheCap.com projects a four-year deal worth $40.5 million, which includes $21 million in guarantees. If Hooper reaches those benchmarks, his deal would come with the highest annual average value, second largest total guarantee, and fourth highest total value at his position. It wouldn’t likely last long with Travis Kelce reaching free agency in 2022 and Zach Ertz owning the option to void his deal for a bigger one in 2022. But you have to start somewhere.

Hooper fits what teams tend to look for in free agent skill position players. He is young (25, but doesn’t turn 26 until November 4), accomplished (two-time Pro Bowler who has finished second on the Falcons in catches behind Julio Jones each of the last two seasons), and skilled (re-visit the stats and grades above). But the catch here could be the contract.

A $10.13M AAV for Hooper’s free agent deal would eat a hefty chunk of the Bears’ salary cap (roughly $26M at this point). And after being burned by previous free agent endeavors, it would be understandable if the team went in a different direction. Hunter Henry and Eric Ebron headline the other tight ends who will be highly coveted in free agency this offseason. Meanwhile, the 2020 NFL Draft has a number of intriguing prospects. So it’s not as if there is a shortage of options for the Bears to address this troubled position, it’s just that they shouldn’t ignore the obvious solution at the top of the market before doing so.

The Bears rolled out Trey Burton, Adam Shaheen, Ben Braunecker, J.P. Holtz, Jesper Horsted, Bradley Sowell, and Eric Saubert to play what is arguably the most important position in Matt Nagy’s offense. And to say the production was lackluster wouldn’t be doing it justice. The tight end position has been a revolving door of disappointment, with one player’s shortcomings being more frustrating than the next. Prioritizing change at this position should be at the top of GM Ryan Pace’s to-do list.