Jimmy Graham Is Likely Headed to Free Agency, But He's Probably Not an Ideal Fit for the Bears Skip to content 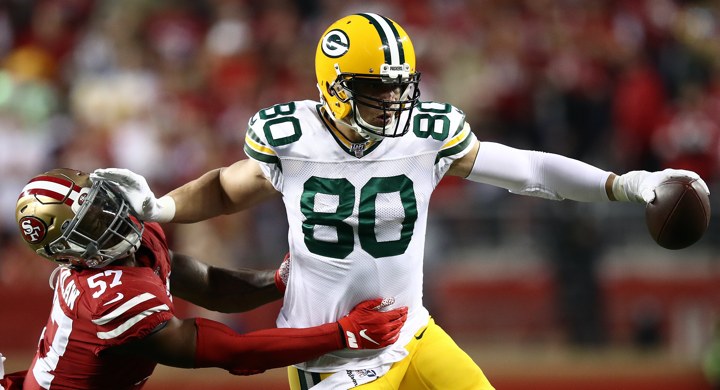 Jimmy Graham’s time in Green Bay appears to be coming to an end.

One potential play-maker hitting the market: #Packers TE Jimmy Graham is not expected back in Green Bay, sources say. The move with the 33-year old former free agent signing is noteable, though not a surprise for anyone involved.

Rapoport tweets Graham is not expected to be brought back to Green Bay for the third year of his contract. And while ESPN’s Rob Demovsky echoes the sentiment, he also points out that no decision has been made regarding the tight end’s impending release. Even still … the writing is on the wall and it doesn’t look like Graham will be seeing a third year in Green Bay. And to be honest, that’s probably bad news for the rest of the NFC North.

Using OverTheCap.com’s cap calculator, cutting Graham would increase the Packers’ available cap space to $27,950,042. Or in other words, ample space to sign a premier free agent to fill the vacancy Graham will leave behind. Perhaps Green Bay would be a landing spot for free-agent-to-be Austin Hooper, at whom the Packers will reportedly make a run this offseason … right alongside the Bears. The mere thought of Aaron Rodgers getting to throw to a two-time Pro Bowl tight end like Hooper – who, unlike Graham, is in the prime of his career as he reaches free agency – is pure nightmare fuel. I hate it. A lot. Thanks for asking.

As for Graham, this doesn’t feel like a great market for him to jump into. Despite prior accolades accomplished with the Saints and Seahawks, he looks to be a player on the decline. Graham, 33, hasn’t played with the explosiveness he did while he was racking up three Pro Bowl appearances in a five year stretch withn New Orleans. Nor was he the type of impact player in the red zone like he was when he was a two-time Pro Bowler with 16 touchdowns in his final 32 games in Seattle. And because of that, I imagine Graham would rank behind Hooper, Hunter Henry, and Eric Ebron among free agents at the position.

Perhaps Graham heading into free agency would be good news for the Bears? After all, Chicago figures to be aggressive in the tight end market after a disappointing showing from their gaggle of try hards in 2019, and the more options the better (for a buyer). Given GM Ryan Pace’s familiarity with Graham and the Bears’ rumored interest in the tight end back in 2018, it wouldn’t be surprising if the two were connected on the rumor mill at some point. But because of his ineffective play coinciding with his rise in age, it is tough to imagine Graham and the Bears as an ideal fit.