Finally, We Have Some Details on Nick Foles' Restructured Bears Contract Skip to content 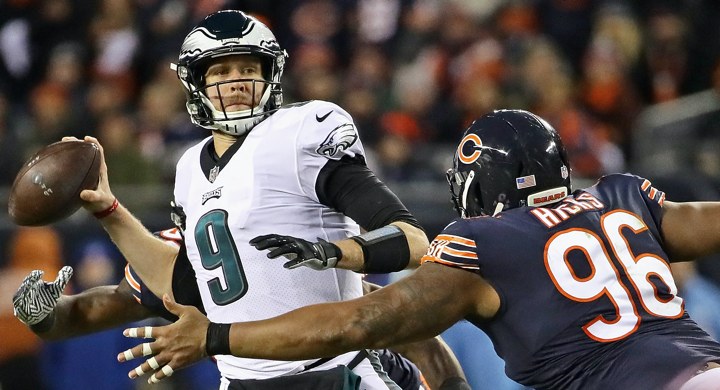 The Chicago Bears’ trade for Nick Foles went down a couple weeks ago, but only just became officially official this week. Thus, we’ve had to wait a long time for the contractual particulars.

What do I mean? No, I’m not talking about the swap, itself. We know that it’s Foles for the Bears’ compensatory fourth rounder. Done and done.

Instead, I am talking about the restructured Foles contract that made the deal slightly more enticing to the Bears. After all, a 4th rounder for Foles on his existing deal sure seemed like a steep price.

Moreover, the only note we got at the time on the restructure was a bit about how the contract had been *improved* for Foles, with nothing about what the Bears were getting in return for improving the deal for Foles:

Nick Foles already has restructred his contract with the Bears, per source. He still has three years left, still has $21 million guaranteed left, but Foles now has the ability to void the deal after either of the first two years depending on his performance. Deal includes upside.

It has stuck in my craw ever since: if the Bears gave up voidable years to Foles in restructuring the contract (player benefit), they must have received something (from Foles) in return. That would be the entire point of restructuring the contract: to make it as palatable as possible for Foles (he didn’t have to say yes!) in exchange for the structure of the deal being a little more helpful for the Bears.

But what *IS* that bit of helpfulness for the Bears?

Knowing how the Bears are trying to squeeze in as much possible maneuvering under the cap this year, it was a fair bet that the guaranteed money in Foles’ deal had somehow been redistributed to reduce the 2020 cap hit. Moreover, I was wondering whether the Jaguars were going to assume some of the remaining dollars on the deal.

With Nick Foles' trade official with the #Bears, a contract breakdown:
— $24M over 3 years with $21M still fully guaranteed.
— $6M available in incentives per year.
— Every $1 earned of incentives also escalates the next year’s salary
— He can void '21 & '22 based on performance

Rap adds that Foles’ base salary will be $8 million per year, and if the guarantees are also equally spread out over the deal, you’re looking at about $7 million per year. On his old deal, Foles also had about $21 million guaranteed remaining, with most of it coming this year, plus a $5 million roster bonus that was already locked in and would have been paid out early next year.

We are still missing some nitty gritty, but you do start to see the gist of what was in this deal for the Bears: instead of Foles’ cap number being nearly $16 million for the 2020 season, it’ll now be only about half that. So the Bears got to add a QB to compete with Mitch Trubisky and perhaps supplant him without crushing their cap flexibility.

In exchange, the Bears had to take on the full $21 million guarantee, and also offer Foles those $6 million in annual incentives. For Foles, that means he gets the protection of a lot of extra money if he becomes the clear starter, and he also gets the opportunity to walk away from the Bears (and the future guarantees) if he feels like he can get a better deal on the open market next year. It’s kind of a win-win situation in that regard.

Possible paths, based on this contract:

In the meantime, the Bears will have hopefully drafted a developmental quarterback to provide them additional flexibility and long-term planning ability.

Brad from Over the Cap pegs the Bears’ current cap flexibility at about $9 million remaining, pending the price tag on the Germain Ifedi deal.