More For Montgomery, Super Bowl XX Replay Coming Soon to You, and Other Bears Bullets Skip to content 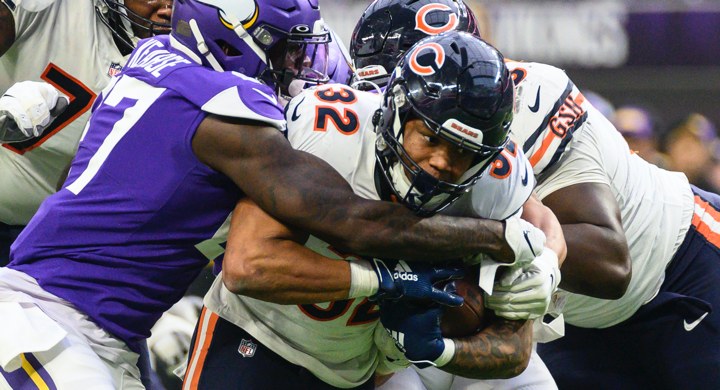 Some laughter to start your Sunday:

•   I still have hopes for running back David Montgomery as he enters his second year as a pro. But I would feel even better about his chances to be a playmaker in Matt Nagy’s offense if I knew he was going to get the ball more in 2020. Montgomery received 267 touches as a rookie, or 16.7 per game. That’s two fewer on a per-game basis than Jordan Howard received as a rookie when his 281 touches in 15 games (13 starts) came with 1,611 total yards (1,313 on the ground) and seven total touchdowns. I’m not sure what the perfect number of touches for Montgomery looks like, but given the current look of the offensive personnel employed by Chicago’s football team, I’d venture to guess it is more than 267.

•   Montgomery is top of mind today because it is his 23rd birthday, which the Bears celebrated by sharing this moment via their social media networks:

•   The best birthday gift the Bears could give Montgomery is more touches. Change my mind.

•   The second best gift they can give him is more usage in packages like the one in the video above. There is so much I like about that formation, play design, route concepts, and ultimately, execution. This is how I figured the Bears might use Montgomery in the passing game last year. Line him up wide. Isolate a matchup against a linebacker, have him rub across the middle, cause confusion with misdirection, and allow Mitchell Trubisky to get the ball out quickly into the hands of his playmakers. I’d like to see more of this in 2020, and I’m certain I’m not alone.

•    Take this for perspective: Montgomery had just 25 catches and 185 receiving yards as a rookie in 2019. Those aren’t the numbers he was expected to put up as a projected featured back who was supposed to bring an upgrade in the pass game from what Howard previously offered. Montgomery didn’t get the opportunities he should have. Heck, he didn’t even get as many as Howard did when he was a rookie. In 2016, Howard pulled in 29 catches for 298 receiving yards as a rookie in 2016. That was part of a season in which Howard went to the Pro Bowl, ran for 1,313 yards, and scored seven total touchdowns. I won’t go as far to say Montgomery needs to put up a Pro Bowl year, but his production needs to reach a second gear this year.

•   For your entertainment pleasure, here’s Spice Adams, Tarik Cohen, and Montgomery in an episode of “Big Guys in a Benz” from the Bears’ YouTube page:

•   There were some moments in mini-camp when pass-blocking was a concern for Montgomery. That’s only natural, as pass protection is one of the things that rookie backs have to do more at the pro level than they did when they were in college. And as it turns out, Montgomery was one of the best in football:

•   Traditionally, being a good pass-blocker tends to get you more touches in the grand scheme of things. Make it happen, Bears.

•   Being a rookie is hard. Being an undrafted rookie trying to make a season-opening roster is another level of difficult. And of all the years to be a UDFA in camp, making the cut appears to be more challenging than ever. Over at the NFL’s official website, Chase Goodbread writes about undrafted rookies in search of tryouts who are facing trying times as they try to claw their way into the league.

•   Don’t you dare snicker at me. Players such as Malcolm Butler (you might remember him as the guy who locked up Super Bowl XLIX with an interception of Russell Wilson), Adam Thielen (Pro Bowl receiver), Chris Harris (four-time Pro Bowl cornerback) are among standout UDFAs who went from being in on a tryout  to star status in the league. No, it’s not a normal trajectory. But you’ll never know who will emerge if you don’t have players try out.

•   Also worth noting the Bears’ roster is at max capacity (90 players), so I don’t imagine them as needing to bring in any tryout guys at this time. Even still, this is generally a time where we’re seeing guys come in on tryout deals. I’m curious what the lack of that constant roster churn we’re used to will do to teams this summer.

When it comes to sports and the NFL, coronavirus still threatens our favorite games, writes @Hub_Arkush https://t.co/6INqLHcSDF

•  “Let’s not forget about corona, bro” is a quote from Danny Trevathan’s recent video conference that caught my eye, but there’s also a quote (via JJ Stankevitz of NBC Sports Chicago) from Akiem Hicks that really captures the spirit of the thing. “It’s scary to think that most of my job is physical contact with other players. And so boy, I don’t know. I want to be safe and I’m sure they’re going to do their best to make sure we’re in the best possible situation in order to be able to play this game and do it, right? But it’s scary. That’s how I feel.”

•   Best of the Month books, home gear, and more are your Deals of the Day at Amazon. #ad

ESPN has released a new first look trailer for the upcoming Sammy/McGwire doc, which comes next weekend … pic.twitter.com/GdcurGu13u

•   Hook all of your Bulls future head coach rumors directly to my veins:

76ers’ Assistant Ime Udoka is Reportedly the Front-Runner to Replace Jim Boylen (But an Exhaustive Process This Will Be)https://t.co/b5oJArRdA5