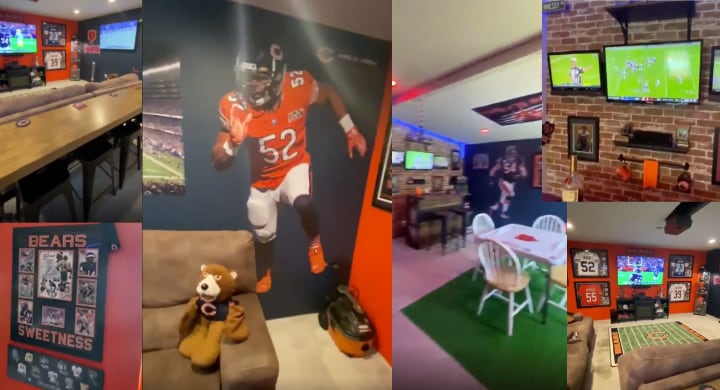 “The Last Dance” spoiled us. That 10-part series about the dynasty Bulls of the 1990s that captured what that whole thing was all about set a high bar for ESPN sports docs during a time of sportslessness. Unfortunately, I don’t feel as if “Long Gone Summer” reached those heights last night.

I’m not a film critic. Nor do I want to play one on TV (or on this site). But watching (and re-watching) made me feel as if there was a lot of interesting stuff left on the table as far as the subject matter of the 1998 home run race is concerned. Had this been billed as a Mark McGwire image rehabilitation doc, I probably would’ve watched anyway because I miss baseball that much and I’m sure I would have learned something I did not know before. But it was billed as a home run race doc, which left me mostly unsatisfied. But at least the nostalgia stuff was good enough to keep me from thinking about how MLB’s owners and commissioner are doing their best to alienate fans.

•   Kyle Long throwing shade in the Bears’ general direction is not what I expected to see as I was typing up this morning’s Bullets:

•   I imagine this is a difficult time for Long. For the previous eight years, this was the time of year in which he was gearing up to play football. And even though in recent years, much of that time was dedicated to getting his body in a place where he could give it a go, Long was still pushing through to make the most of the situation. That Long’s body failed him during the tail end of his Bears career stinks. So I’m keeping that in mind as I read through Long’s tweets today.

•   Also, if any media brand was wanting to hire Long, but had reservations regarding a possible inability to deliver sharp criticisms of his former teammates, coaches, and bosses, I feel as if those tweets help answer any such questions. Long has been pretty positive regarding the Bears throughout the offseason. So much so, it was fair to wonder if being an impartial observer regarding his old team would be a challenge. Based on this round of tweets, I would guess that isn’t the case.

•   This is everything a Bears man cave is supposed to be:

•   Multiple TVs. Memorabilia. Card Tables. Full coolers. Fat heads. Jerseys. Bar games. It’s a wonderful blend of everything that should be included in a place where you spend your Sundays (or Mondays … or Thursdays). The only thing that’s missing is a second replica Super Bowl trophy.

•   An improved offense would go a long way toward getting the Bears closer to their Super Bowl aspirations in 2020. Specifically, I feel as if a better passing game would help the team tremendously. It’s why I’m intrigued by the latest from Greg Williams (Bears Wire) who caught up with trainer Jerrand Nesmith, who has been working out with Javon Wims. The 2018 sixth-round pick isn’t the most high-profile pass-catcher on the Bears’ roster, but his size and route-running ability should make him a solid target for whomever wins the QB competition. But because Wims is still relatively unproven after two years in the league, there is a certain climb he has to make before he gets an increased role.

•   By my count, the Bears have 12 receivers on their 90-man roster. We can lock in Allen Robinson II, Anthony Miller, Ted Ginn Jr., Cordarrelle Patterson,  and Darnell Mooney into five roster spots. That leaves Wims battling among the likes of Riley Ridley, Reggie Davis, Trevor Davis, Ahmad Wagner, Thomas Ives, and Alex Wesley. It’s not the sexiest position battle on the board, but it’s one of great importance. Chicago needs as many players as possible who can run crisp routes, show off reliable hands, and also chip in on special teams. The receivers on the back end of the depth chart need to show that they can be complimentary players. If they can’t do that, then I can’t imagine them making the roster in Week 1.

•   Here’s something to think about: The RG1 spot is going to play a role in how well the QB competition contestants play. And the quarterback derby’s participants will ultimately play a role in which wide receivers look good. Look how intertwined everything is!

•   OOF! Maybe this isn’t a good time to have an untraditional offseason or a condensed preseason.

How do sports viewers feel about the NFL on television?

We asked nearly 2,700 people to answer Qs on the best broadcasters, should gambling info be part of pregame shows, use of rules analysts, best network overall for coverage & much more. https://t.co/f9UT9h2c8G pic.twitter.com/zYRKYty6QV

The latest "Bear With Me" Podcast from @robertkschmitz has him recapping the week of #Bears pressers including the one from Mitchell Trubisky, plus plenty of other Bearscentric topics of discussion! Listen here: https://t.co/Kf7OGwtcie