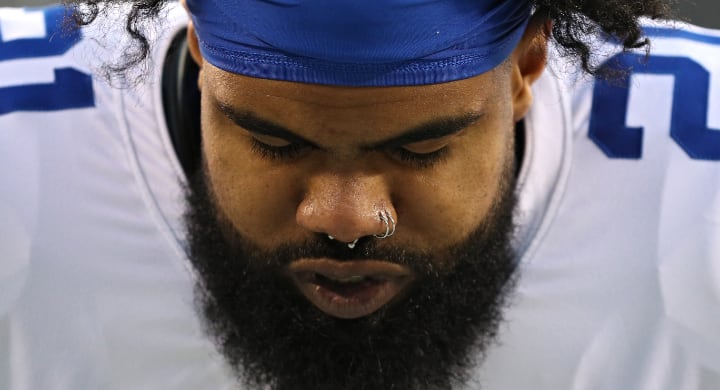 Some news from NFL Network insider Ian Rapoport, which serves as a reminder that we – as a nation – are still battling through a pandemic.

Several #Cowboys players & several #Texans players have tested positive for COVID-19 recently, sources tell me & @TomPelissero. None of the players are believed to have been in their team facilities. The teams followed proper health protocols.

Sources have informed Rapoport and Tom Pelissero that players on the Dallas Cowboys and Houston Texans have recently tested positive for COVID-19. On top of that, Rapoport was able to confirm one player with a confirmed case:

#Cowboys star RB Ezekiel Elliott is one of the players who has tested positive for the Coronavirus, his agent Rocky Arceneaux confirmed to me. Arceneaux said Elliott is feeling good.

And while the Cowboys were quick to cite privacy laws regarding which players tested positive, it was Ezekiel Elliott’s agent who confirmed the news to Rapoport.

To be clear, it wasn’t unexpected that – at some point – NFL would test positive for COVID-19. In a follow up tweet, Rapoport shared something NFL Chief Medical Officer Dr. Allen Sills said: “We fully expect that we will have positive cases that arise. … Our challenge is to identify them as quickly as possible and prevent spread to any other participants.” That the Cowboys and Texans have apparently done that is in line with what was anticipated all along.

These players aren’t believed to have been in team facilities, as teams continue to proper the health protocols and regulations in place at this time. Even still, the NFL has yet to publicly share protocols for players who test positive for COVID-19 during training camp, preseason, or regular season. Surely, that will be pushed forward at some point before players and coaches report back to their team facilities and training camp opens up.

But with reports out of Texas showing the state is hitting record peaks, this isn’t the type of news anyone wanted to cross their wires.