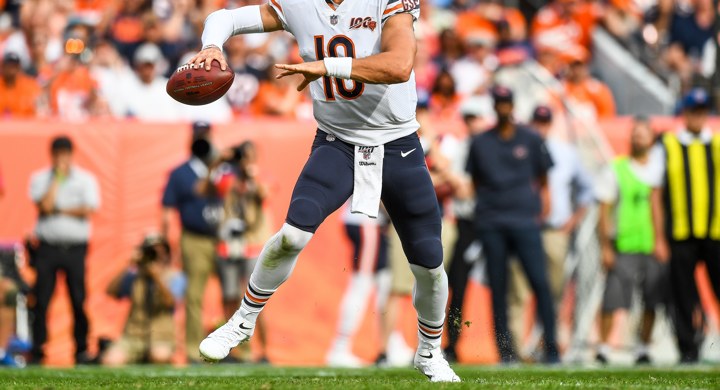 I didn’t mean it (totally) in jest this morning, when I said that I’d love to been a fly on the wall for the conversation between Mitchell Trubisky and new QBs Coach John DeFilippo. Oh, to be in on a conversation detailing what Trubisky can list as strengths and what needs to be improved.

At a minimum, the honest assessment and potential back-and-forth between Trubisky and a new voice could prove crucial to Trubisky’s attempt to win the 2020 Bears quarterback battle. And while there is no shortage of opinions on what he can do better (that’s a laundry list of things), DeFilippo made some interesting comments while pointing out one issue that has been in front of Bears fans since he was drafted.

Check out these tweets from Chicago Tribune reporter Dan Wiederer:

DeFilippo believes/agrees Mitch Trubisky's footwork is in need of significant refinement. Said Trubisky was good in that department early in games in 2019 but then noticed it often got sloppier as games wore on.

That Trubisky’s footwork is “in need of significant refinement” just stands out above everything else, doesn’t it? And that it does as he enters his fourth year as a pro is a bit unsettling. But at least he has a coach willing to say the loud part loudly right now.

We have seen good footwork be a pillar of Trubisky’s success. And we have also seen poor footwork be a catalyst pushing him toward re-working his mechanics. In short, having good footwork is an important part of having a good base as a quarterback. Because if your base isn’t sturdy, it makes it difficult for your play to be steady. Pointing this out and pushing Trubisky to work on it feels like a step in the right direction. And yet, I’m not totally sure how much it matters.

We’ve seen Trubisky excel at times when he has been given the opportunity to make off-platform throws. The types of plays where his athleticism takes over, footwork be damned! And we’ve also seen Trubisky struggle when given a clean pocket while using proper footwork because his reads and processing have failed him. Don’t get me wrong. I think footwork is important and that good feet are necessary to be a good quarterback. It’s just that Trubisky’s footwork isn’t the only issue holding him back.

At least Trubisky has a coach who is well-versed in stressing the importance of quarterback footwork: