Jay Cutler is a National Treasure, All-Decade All-Stars, Juneteenth, and Other Bears Bullets Skip to content 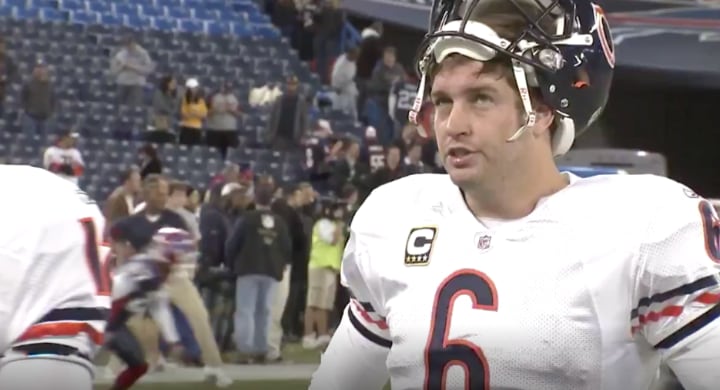 A friend of mine posted a classic clip of a Blink-182 live show this morning and now I can’t get “Carousel” out of my head. Guess I know what I’ll be listening to today!

•   The Chicago Bears and the rest of the NFL are celebrating and honoring Juneteenth, a holiday that observes the end of slavery in the United States as the news reached Galveston, Texas, which was the last remaining group of Confederate sympathizers.

•   Some words from linebacker Josh Woods on what Juneteenth means to him:

•   Over at NBC Sports Chicago, JJ Stankevitz writes the Bears need to support player protests, explaining why and how they will. When we heard players speak to the media last week, there was a sense that the Bears were being supportive of their players right now, which is important considering we are in a time where people across the country are protesting racial injustice. But support shouldn’t stop there. Perhaps the NFL and all of its teams have a better understanding of what is happening now than when Colin Kaepernick first began his protests.

•   Something to file away for later:

Bears CEO Ted Phillips says "in a perfect world" the entire team will agree on a way to demonstrate in unison this season, echoing Matt Nagy. Phillips says kneeling has opened people's eyes to what Colin Kaepernick's cause is, so he doesn't sound opposed to it.

•   There is no easy transition to go from serious subject matter to the rest of our Bullets. So here’s 3 minutes, 42 seconds of the greatest quarterback to lace ’em up for the Chicago Bears mic’d up for your entertainment:

bring back Josh McCown so he can fight a bear.

•   Highlights of Jay Cutler’s high school basketball career started making their rounds again, so I suppose these are worth watching as part of your Friday flashback:

Coach Pagano on the importance of @The_Dream99's voice on and off the field: "You can’t replace it. We’re different when he’s out there. He’s a wise, wise man. He’s a smart guy. And when he speaks, people listen."

•   Khalil Mack is going to destroy people this year:

•   ESPN’s nation of NFL reporters put together an All-Decade Team featuring only NFC North players. It’s not like the Bears weren’t well represented. Kyle Long, Josh Sitton, Julius Peppers, Jared Allen, Lance Briggs, Charles Tillman, and Cordarrelle Patterson are all players who played on the Bears during the last decade who made the cut. Between playing out of position and his short tenure with the team, I don’t consider Allen a #TrueBear. But Patterson gets recognition from me, if only because he’s done it on the field as a player and off of it as a recruiter/GM-in-waiting.

•   I can’t wait until June 2030 when we’re looking back at the All-Decade team littered with Bears offensive players. Allen Robinson represents at wide receiver. James Daniels checks in at one of the guard spots. Cole Kmet is the division’s top tight end. A quarterback to be named later gets the torch passed to him from Aaron Rodgers as the King of the North’s QBs. It’s gonna happen, so we might as well prepare for it now.

•   It’s quite telling that the only Bears offensive players to make the team were interior offensive linemen. Although, I think Matt Forte deserved serious consideration for his contributions as a running back. And I think Brandon Marshall’s excellence was overlooked. Maybe there is a case to be made for Marshall over Davante Adams?

•   A whole lotta tools are your Deal of the Day at Amazon today, and I also see that the newest Apple Watch is a hundred bucks off today. #ad

•   I guess we know what Theo Epstein will do after he is done running the Cubs:

•   In a year of normal travel, I would be preparing myself to schedule a trip to witness the firepower of the fully armed and operational battle station in Vegas:

•   The Bulls could really use some lottery luck …

Here’s What We Could Learn from the Bulls First Pick in the 2020 NBA Drafthttps://t.co/4datp4uMKw

•   And some good fortune once their search for a new head coach officially begins.