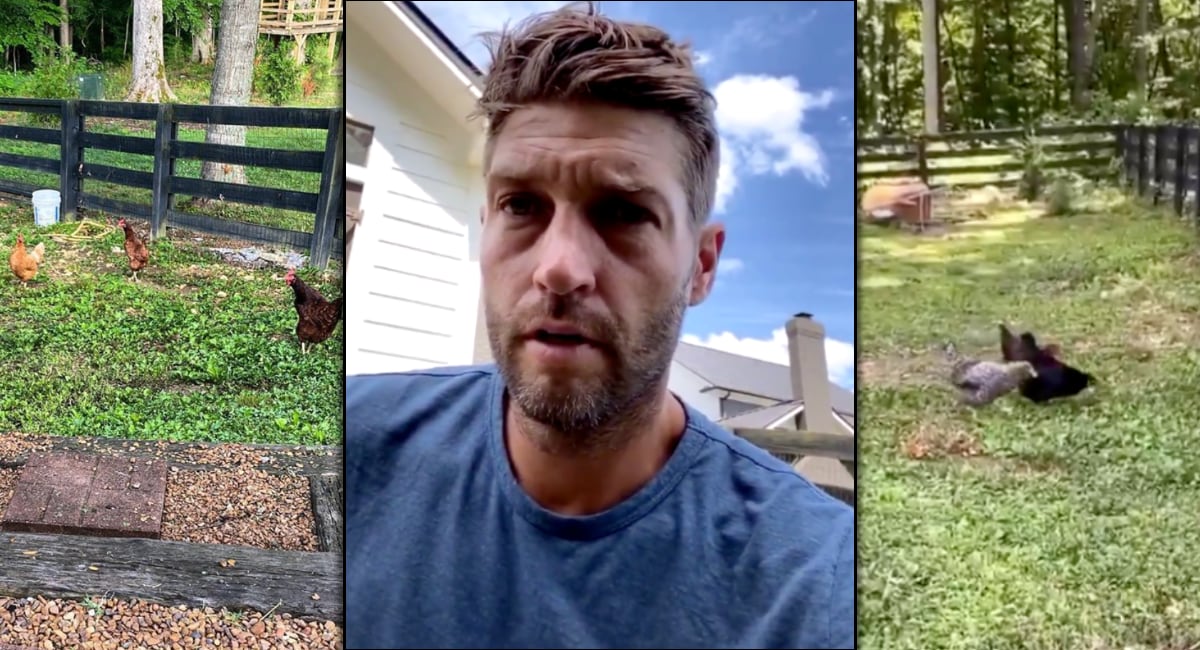 I realize I’m ridiculously late to the party when it comes to “The League,” but Season 3, Episode 11 left me laughing out loud in a way I hadn’t while watching a television show in a while. *Extreme Bill Belichick voice* We’re on to Season 4 later tonight.

•   When Marshawn Lynch shared “take care of y’all chicken” as advice for younger players, I wasn’t exactly sure what it meant. But I was pretty sure I appreciated the sentiment. Meanwhile, retired Bears quarterback Jay Cutler is literally taking care of his chickens:

•   In case it has flown under your radar, Jay Cutler has taken control of his own instagram account. And while some of his most recent shares have shown off some pretty sweet skies, the situation has grown more serious. In his IG stories, Cutler has been informing his followers that he’s “got a chicken serial killer on the loose” after he learned some of his precious chickens have gone missing. Documenting this story via Instagram isn’t what I expected to lead Bullets with, but welcome to the NFL offseason!

•   One potential suspect has been cleared of wrongdoing:

To the cat: while I’m not sorry you were accused of these vicious acts, I will be the bigger person and admit I was wrong. You are not the the suspect we are looking for. Take it as a compliment for your savage ways of life. Carry on Cat.

•   If only the NFL offseason was all fun, games, and hunts for chicken killers. Because, on a serious note, the league has canceled the Pro Football Hall of Fame game that was set to feature the Cowboys and Steelers. It might not be a harbinger of doom, but my concern levels are a little higher today than they were yesterday.

•   Gonna put this in my planner (but in pencil, of course):

So there is a date to report: July 28. The NFL and NFLPA are still negotiating what camp will look like and how the protocols will be handled and everything else. But players will arrive on time. https://t.co/BLrbUQnRXx

Best quarterback to ever play for your favorite NFL team. Go …

•   Sure, Cutler owns all the important quarterback records in the franchise’s history books. Jim McMahon won a Super Bowl. Josh McCown was a fan favorite of legendary proportions. Sid Luckman did things quarterbacks had never done before. But it’s really hard to top Cohen’s raw numbers.

•   Although, I suppose there’s a case to be made for Walter Payton as the best QB in franchise history. But perhaps that’s something that needs a deeper exploration at another time.

Top 10 Defensive Linemen in the NFL
(According to @ryanwilsonCBS)

•   I can understand Eddie Goldman not making the list. After all, nose tackle isn’t the most prestigious position on the defense. But no Akiem Hicks in your top-10? Nah … that’s not right at all.

•   Jacob Infante (Windy City Gridiron) writes about Anthony Miller as a sleeper target for your fantasy football season. With Taylor Gabriel’s release and the Bears deciding not to replace him with a higher-profile signing, Miller should get additional looks from whomever is quarterbacking the team. Perhaps he might get even better looks if Mitchell Trubisky’s offseason workouts yield tangible results or if Nick Foles reverts to 2018 form.

•   I had an end zone view of this shot play and it was right there for the taking with a better throw. That miss instantly made me want to run to the concession stand for a drink, but was stopped because I was (1) in a seat in the middle of the row and (2) drinks were expensive at the Coliseum.

•   Once in a while, I think about random ex-Bears. And not only do they get more random than Devin Aromashodu, this one-game outlier is one of my favorite performances of all time:

Is this the best game by a random Bears player ever? https://t.co/KbYe5t0gKb

•   Seriously … is his 7-catch, 150-yard game the best single-game performance by a random Bears player ever?

For reference, a Florida black bear can reach a top speed of 30 MPH according to The Great Bear Almanac.

•   Missed out on celebrating some history yesterday:

On this day in 1922, the American Pro Football Association is renamed the National Football League. Also that day, the 1921 champion Chicago Staleys are renamed the @ChicagoBears as, under head coach George Halas, they finish 9-3 and in 2nd place behind the 10-0-2 Canton Bulldogs pic.twitter.com/jZoygoc00a

•   Is this a case of ignorance being bliss or one of “well, this guy just wants it more” … I really don’t know:

•   Perhaps Cubs-White Sox can grow into a true rivalry instead of a game between two teams who happen to share the Red Line:

The Cubs Could Be Facing the White Sox for 10% of Their Games This Year https://t.co/3blV13ANl1 pic.twitter.com/lXOyJyQghc

•   Marian Hossa signed with the Blackhawks on my 23rd birthday. It came at a time when my long-time hockey friends were getting me into the game. Talk about good timing! Hossa’s two-way excellence made him a Hall of Fame lock, so news of his induction yesterday was met with quite a smile from yours truly: