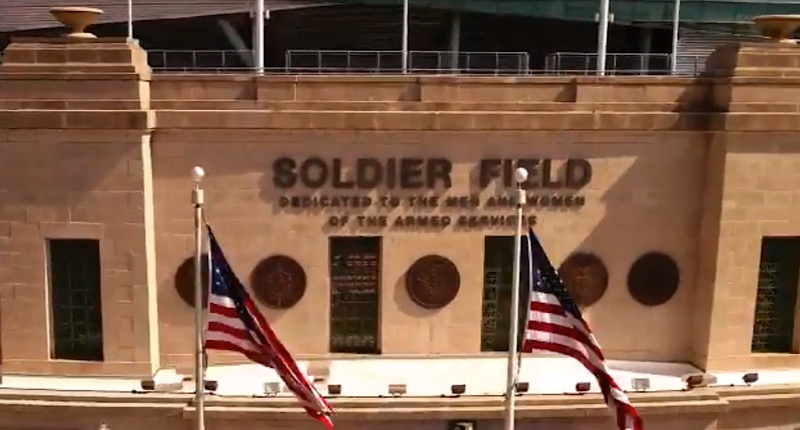 But according to The Athletic’s NFL writers, it’s one of the best stadiums in the league.

Reached out to 30 of our NFL writers to put together a ranking of all NFL stadiums.

Here are the results (AT&T Stadium did well): https://t.co/RHtIxp8MmC

Seeing Soldier Field ranked as the seventh best stadium in the NFL is a surprise, to be sure, but a welcome one. And sure, this ranking is based on the opinions of The Athletic’s football writers, so the sample is small and limited to that collection of poll-takers. But still … a top-10 stadium in the NFL. That’s neat!

I’ve shared my beef regarding Soldier Field in this space before. So in the interest of fairness, I suppose it’s only right to open up about the things that probably went into the home of the Bears checking in at No. 7 on the list.

It’s not as if Soldier Field isn’t without its charm.

It’s got history on its side, as legends have played on that turf for decades. And even though the Bears haven’t been consistently great during my lifetime, there are dozens of memorable games that have taken place at this stadium.

The sight lines are legit, especially if your seat is in a place where you can check out Chicago’s magnificent skyline. Even if they aren’t situated to give you a skyline view, I maintain one of the best seats in the house is the aerial view behind either one of the goal posts.

The architecture is unique. Yeah! That’s a nice way to put it. Say what you want about the design, but the colonnades at Soldier Field have such a distinct look that makes it stand out for the right ways. OK, I get it. I know it looks like a spaceship landed inside the joint, but from the inside, the bowl looks good. Shouldn’t that count for something.

And then there’s the game-day experience. There is something about the walk-up to Soldier Field that makes me feel things. That walk gets me pumped in ways I didn’t think I could possibly achieve. Simply thinking about being in attendance for my last prime-time game — the Bears’ 2018 Sunday Night Football win against the Rams — gives me goosebumps. I suppose that’s what a good stadium does.

To be clear, Soldier Field isn’t without its drawbacks. It has the smallest capacity of any NFL stadium. The parking is far from ideal. It’s incredibly difficult to access via public transportation. And have we mentioned it looks like aliens who arrived from a galaxy far, far away parked their space cruiser at the lakefront and decided they didn’t want to leave Earth? But enough somebodies like it for it to earn a top-10 ranking.

Maybe the Bears won’t have to move into new digs in 2033 after all.