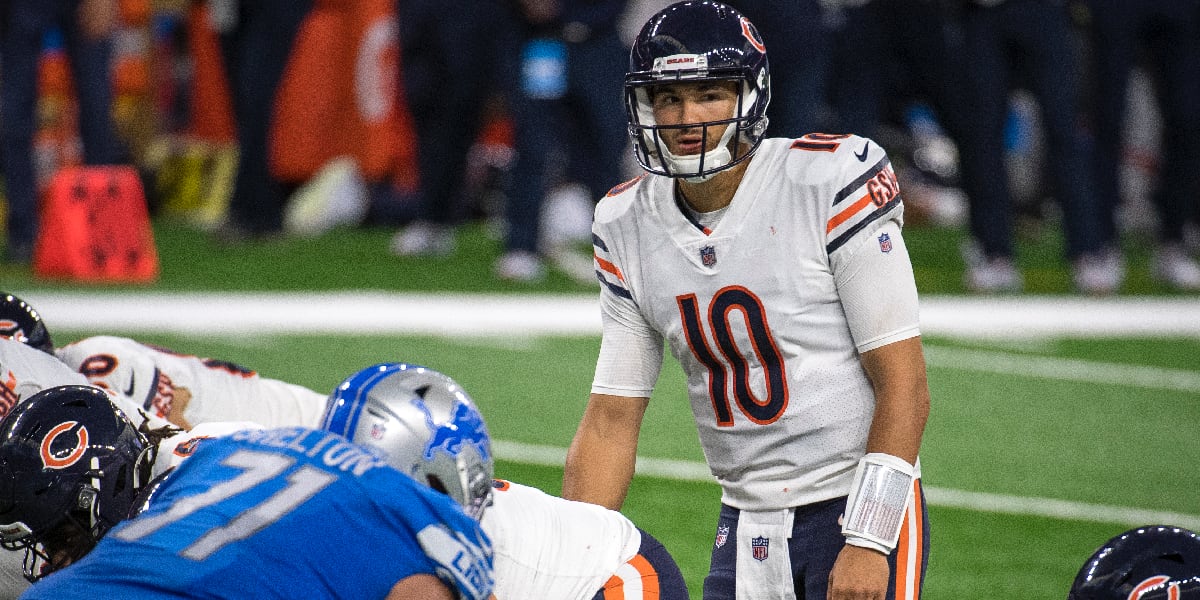 It’s fair to say that — through two weeks of the 2020 NFL season — that Mitchell Trubisky has improved.

Even still … he knows he can play better:

Mitch Trubisky asked if he thinks he's playing well enough: "Definitely not. I'm trying to improve in every aspect."

Self-reflection is important. As is the ability and desire to continue working even after a 2-0 start. But in some circles, back-to-back Bears wins to start the season has gone a bit too far. So while it’s far too early to put too much stock into mock drafts, some early returns have analysts changing their tune regarding Chicago’s future needs.

•   First, from Ryan Wilson of CBS Sports: “You know Mitchell Trubisky is going to play just good enough to get an extension, and depending on what happens with Allen Robinson the Bears could be in the market to add more playmakers at the skill position.”

•   And then there’s this from Chris Trapasso, Wilson’s teammate at CBS Sports: “[W]ith Mitchell Trubisky’s confident start, Chicago stays away from quarterback. For now.”

To be clear, this isn’t about the Bears not being pegged to take a quarterback the 2021 NFL Draft. Instead, it’s more about assessing the reasons as to why they won’t. Two games isn’t enough for me to confidently predict Trubisky would play well enough to earn an extension. And even though the start has encouraging signs, it’s not enough to move me off feeling the long-term solution isn’t on this team.

Trubisky is undoubtably the most difficult player I’ve ever had to write about or analyze. His style of play — whether it’s chucking it deep or scrambling like crazy — makes Trubisky fun to root for when he takes the field. And by all accounts, he’s a hard-worker who his teammates rally around because of the effort he puts in. He is blunt with his own self assessments and honest when critiqued during his weekly media sessions. Also, he’s the Bears quarterback. No matter our feelings about his up-and-down play, we’re going to root for him because that’s our default as fans.

But there’s a but … because there always is. Trubisky’s inconsistencies are maddening, especially when the defense his offense tries to complement is at the peak of its powers. A steady level of consistent play is all this group needs to be the force they think they can be. But it hasn’t happened yet. And I’m not ready to say it’s going to happen based on two games.

It’s not that I’m not open to a future where Trubisky is a franchise quarterback. But I’m skeptical. Fool me once, shame on you. Fool me twice, well, what are my other options again?

Trubisky has shown a basic competence of operating within a system that has been modified to hide his weaknesses. Extra tight ends provide additional protection and auxiliary passing targets in the middle of the field where Trubisky tends to be his most accurate. Increased usage of play action passing, which puts the defense out of position and opens up larger windows for Trubisky to throw through. Fewer straight drop-backs, because pocket passing hasn’t been a strength of Trubisky’s at any point leading up to this season. But football isn’t played in a vacuum. Which to me, means that basic competence in Year 3 in the system and Year 4 as a pro from the second overall pick in his draft class should be expected, but not celebrated.

It’s like what legendary broadcaster Vin Scully once said about good not being good enough when better is expected.

Sunday’s game against the Falcons isn’t a make-or-break game for Trubisky, but could be a building block to further show if his growth is sustainable. The Trubisky Revenge Tour takes its show to Atlanta. Let’s make it hot.