Punching-Bag Bears, Special Teams on the Rise, the Search for Balance, and Other Bears Bullets Skip to content 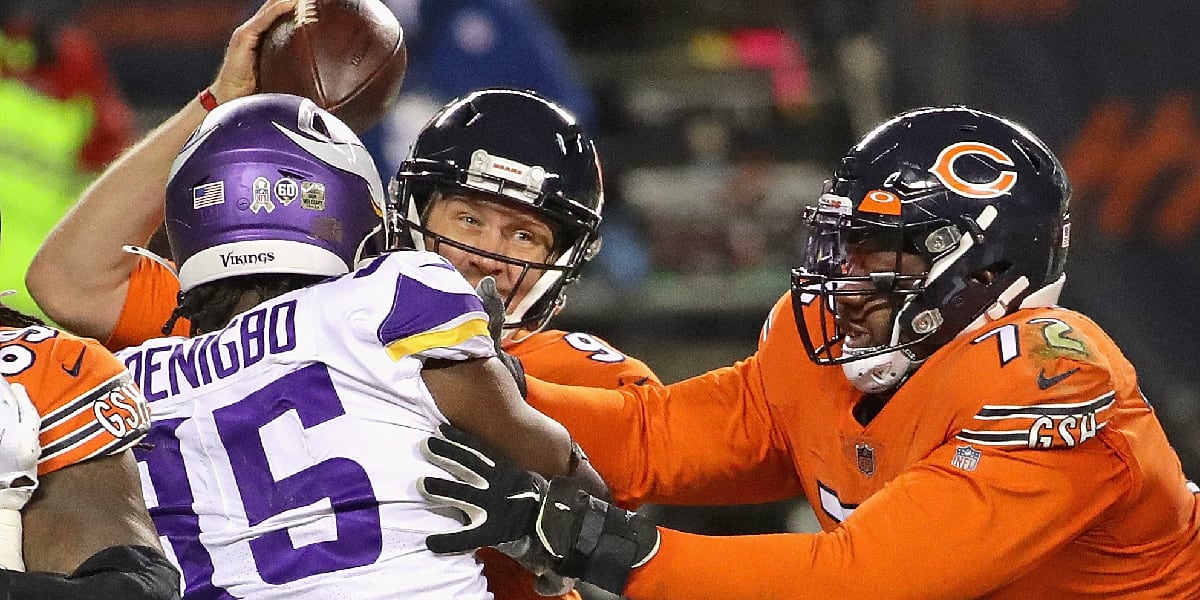 Happy NBA Draft Day! Our friends at BN Bulls are locked in with the coverage over on Twitter and Facebook. Make sure to give them a like and follow. Send them a Fleet, DM, or whatever to tell them how you really feel. Shoot that shot and drain it!

But whatever you do, hang up the phone if a San Francisco based team calls and asks if you want to trade up for the second overall pick in the draft. It’s a trap. Trust us. We’d know.

•   To add insult to injury, which was already dog-piled with insult and injury, the Bears turned into a punching bag on Monday Night Football. Michael Allerdyce (NBC Sports Chicago) highlighted how ESPN’s analysts shredded the Bears at seemingly every turn. The most damning dunk came from Booger McFarland, who said: “The bottom line is, when you’re an offensive coach and you’re supposed to come in and have creative offenses, you’ve changed quarterbacks, you’ve brought in a different quarterback, the problem is not anything but you.” Eep.

•    In yesterday’s Bullets, we highlighted Allen Robinson’s agent showing displeasure in how things were going down. But for the sake of balance, we should also note that he tweeted this:

For the record.. I think Nick Foles is a good QB! 12’s lack of redzone targets has been a head scratcher to me for awhile now.

Bears fans deserve better than this..

•   We can wring our hands as much as we want about so many aspects of the offense. But nothing matters if you can’t block it up. Allen Robinson’s precise route-running and reliable hands are going to waste because the line can’t  consistently sustain blocks. Darnell Mooney’s speed and deep-threat potential is going untapped because Nick Foles doesn’t have enough time to drop back, rear back, and let it fly. Games are won and lost in the trenches. So long as the Bears continue to be beaten at the point of attack, the skill positions will suffer. Full stop.

•   Things weren’t all bad on Monday. Take for instance Cordarrelle Patterson’s kick return touchdown, which looks great from any angle:

The greatest kick returner in the history of the game @ceeflashpee84 #Deuces pic.twitter.com/UCRoG6eMA0

•   Let the record show that the special teams unit – as a whole – is doing work:

•   Lions kicker Matt Prater won the NFC’s Special Teams Player of the Week award, which means Cordarrelle Patterson got hosed. When Prater shows he can be as versatile as No. 84, then I’ll consider re-thinking my position. Until then, I refuse to acknowledge the results of this week’s vote.

.@ChicagoBears @ceeflashpee84 did it all last night; everything but throw the football. The one bright spot for the #Bears all night long. And against the @Vikings I was impressed by versatility and production #BaldysBreakdowns pic.twitter.com/KZvoqLnD6g

•   Death. Taxes. And Khalil Mack playing his way on to PFF’s Team of the Week.

•   Chicago’s defense is fine. It’s just that things would be a bit different had Vic Fangio’s departure happened early enough for Matt Nagy to beat Bruce Arians in approaching Todd Bowles for the position:

Another wrinkle from Todd Bowles in Sunday's win over Carolina. Bucs in a 3-4 front here, but Lavonte David is an OLB and Jason Pierre-Paul is at ILB (he had a delayed rush, hit the QB). pic.twitter.com/BN9UBofWbJ

•   The more Zach Wilson, the better:

This could help BYU (and QB Zach Wilson) get a couple more competitive games on the schedule this year. https://t.co/41Lee4Qb0O

•   This might be more entertaining than the Pro Bowl:

Wait, what was that?!

Jimmy asked @NFL players to casually drop weird phrases into their interviews in Drop It In! 🏈 https://t.co/UO7uLwsvJ1 #FallonTonight pic.twitter.com/MQK75cEAYw

•   The Bears will have some roster housekeeping to do this week:

WR Javon Wims' suspension is over, but he received a roster exemption, according to the NFL's transactions report. That means the #Bears haven't officially put him back on the 53-man roster yet.

•   The Theo Epstein Era is over on the North Side. And while I have ideas on what he should do next (more on that later), Epstein explains his departure:

Theo Epstein’s Full Explanation on Why He’s Stepping Down from the Cubs – https://t.co/JPW2hQ9yE5 pic.twitter.com/1OyKsYu1N3