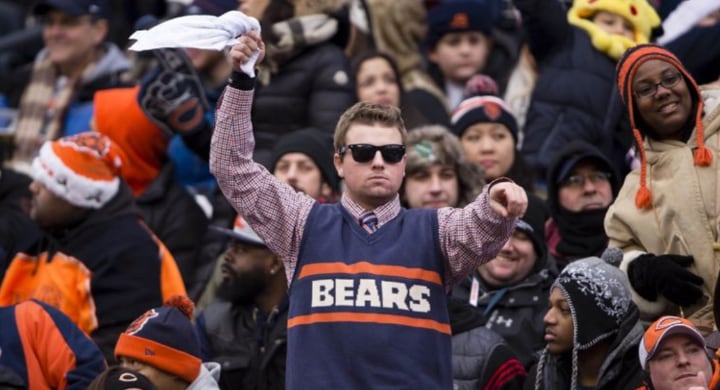 Knowing what Thanksgiving week tends to bring, I’ve prepared by purchasing my favorite seasonal beer — Great Lakes’ Christmas Ale. I drink it on Thanksgiving weekend and Christmas. Because … that’s what it means to be seasonal, right?

•   The enemy of my enemy is my friend. Who doesn’t love schadenfreude on a Sunday? The Lions were shut out by a Panthers team quarterbacked by an XFL standout. Out in Dallas, the Vikings got worked by Andy Dalton and friends. And in Indianapolis, the Packers were outscored 20-3 in the second-half in an overtime loss to the Colts. The defeat knocked them out of the NFC’s top spot. You just hate to see it.

•   A snap-shot of how things look after Sunday’s action:

Bears somehow 1 GB of 7th seed, but get Aaron Rodgers off a loss.

•   Here’s another way of looking at it:

Everything fell the complete opposite way for the #Bears in terms of draft position. If only they had beaten Minnesota last week…. (for those of you still hoping for playoffs)

•   The Packers will enter the week pissed off after losing that game. And even though I should be wary of a peeved Aaron Rodgers entering a prime-time game, I’m not. In fact, I’m not even wishing the Bears would’ve been un-flexed from this spot. “Pressure only does two things to people — it busts pipes or it creates diamonds.” David Montgomery said that upon arrival to Chicago and it still sticks with me. I’d rather run toward the challenge of beating Rodgers in prime-time. Especially when the alternative is a noon slot with a broadcast team that is less accomplished than Al Michaels and Cris Collinsowrth. Just saying.

•   Moreover, I’m a believer that sunshine is the greatest disinfectant. If you’re a fan who wants sweeping change, you should want a prime-time audience to see what you’ve seen locally. The squeaky wheel gets the oil, and it doesn’t get any squeakier than when the Bears and Packers meet in front of a nationally televised audience.

•   If you’re into pain and re-living your worst mistakes, then you probably got a kick out of Deshaun Watson throwing for 344 yards and 2 touchdowns in the Texans’ win over the Patriots. And you definitely enjoyed Patrick Mahomes doing to the Raiders in 75 seconds what the Bears couldn’t do to the Vikings in 60 minutes — which is score an offensive touchdowns. Mahomes is a magician. He orchestrated a seven-play, 75-yard touchdown drive while facing a three-point deficit on the road. That he made it look easy only adds salt to the wound knowing how difficult everything looks for the Bears on offense.

•   Give credit where it’s due: Vegas isn’t the pushover it was a few years ago when it was still in Oakland. Look no further than GM Mike Mayock’s roster construction. Let’s be real. Whoever was responsible for hiring Mayock should get the credit Jon Gruden receives here:

Seems like decades ago when so many were clowning Gruden for giving up Khalil Mack and tons of chatter on how he was running that franchise into the ground.

They lost tonight, but those Raiders look to be in some pretty good hands.

As for Mack’s Chicago Bears……..

•   Jon Gruden, the head coach, is pretty good. However, Gruden, the player personnel dude, not so much. Some guys can do both. Others can’t. And kudos to Gruden for letting Mayock do his thing, which allows Gruden to do his. That tandem has its work cut out moving forward in a division with Patrick Mahomes, Justin Herbert, and a Broncos team that could land in the top-10 in search of a QB.

•   Meanwhile, the storylines revolving a Bears team coming off the bye include draft-eligible quarterbacks and a GM/head coach on the hot seat. We discussed some possible GM candidates on Sunday. To that end, we should probably kick around some head coach options. You know … in the interest of fairness and balance.

•   An interesting tweet from Jeff Hughes at Da Bears Blog:

As of today, this is what I’d do in January.

1. Fire Pace. One winning record in 6 years isn’t good enough.
2. Fire Nagy. He’s a good leader but he has to own offensive failures.
3. Hire Jeff Ireland as President of Football Operations, and he can be the GM or hire one.

•   Friends, I love your house-cleaning tweets. I read them all and they give me life. HOWEVER, they’re better when they are accompanied by a plan for the future. The “fire everybody and replace them with I don’t care” line of thinking was a familiar one among this fan base when Chicago canned Lovie Smith for Marc Trestman. Be careful what you wish for is all I’m saying.

•   With that being said, Hughes’ angle intrigues me. In putting together my short list, I passed on giving Jeff Ireland a spot. My reasoning? I’m unsure if the Bears would go to the Saints well twice. I’m not saying hiring Ireland is a bad idea. His résumé is unique and worth pouring over should we get to that point. It’s just that the higher-ups will have to explain why going to the New Orleans pipeline twice was the right decision. For whatever it’s worth, I’m always ready to have that conversation.

•   Ireland’s résumé is interesting. The Saints’ Assistant GM/College Scouting Director is a well-traveled football guy. Ireland coached special teams in college, scouted for the Chiefs (1997-2000) and Cowboys (2001-04), was the VP of College and Pro Scouting in Dallas (2005-07), GM in Miami (2008-13), consultant in Seattle (2014), and has been in New Orleans since 2015. And to tie it all together, Ireland grew up idolizing the 1980s Bears when his grandfather, Jim Parmer, was a team personnel executive. We can cross more of these bridges at a later date.

Chase Claypool has had a ridiculous start to his rookie year 🔥 pic.twitter.com/zI6M0wF2Sh

•   Claypool was the 49th pick in the 2020 NFL Draft, going six slots behind Notre Dame teammate Cole Kmet. The Bears scouted Kmet intensively, which means they should’ve gotten a good look at Claypool while they were doing their homework. Claypool is a mismatch nightmare at 6-4 and 238 pounds. His size-speed combination is unique. And while I’ll admit he landed in the perfect spot, it sure would’ve been nice to have someone to team with Allen Robinson and Darnell Mooney. Without going too far down a rabbit hole, one player looks worthy of a top-50 pick at this point of the season while the other is still so much of a work in progress.

•   We’ve had these conversations before, but I still want to be clear with my perspective. It’s way too early to give up on Cole Kmet. He is still growing, coming into his own, and in recent weeks, has received a growing amount of snaps. I’ll continue to preach patience, while also nudging for a continued up-tick in usage. But I’m also reminded that drafting for positional need at the expense of taking the best player available is the kind of decision-making that has fans like us talking about a regime change just two seasons after the GM and coach were named the best in the biz.

Thanks for all the love. Can’t get rid of me that easy. See ya next year✊