They're All Out of Excuses: BROWNS 26, BEARS 6 Skip to content 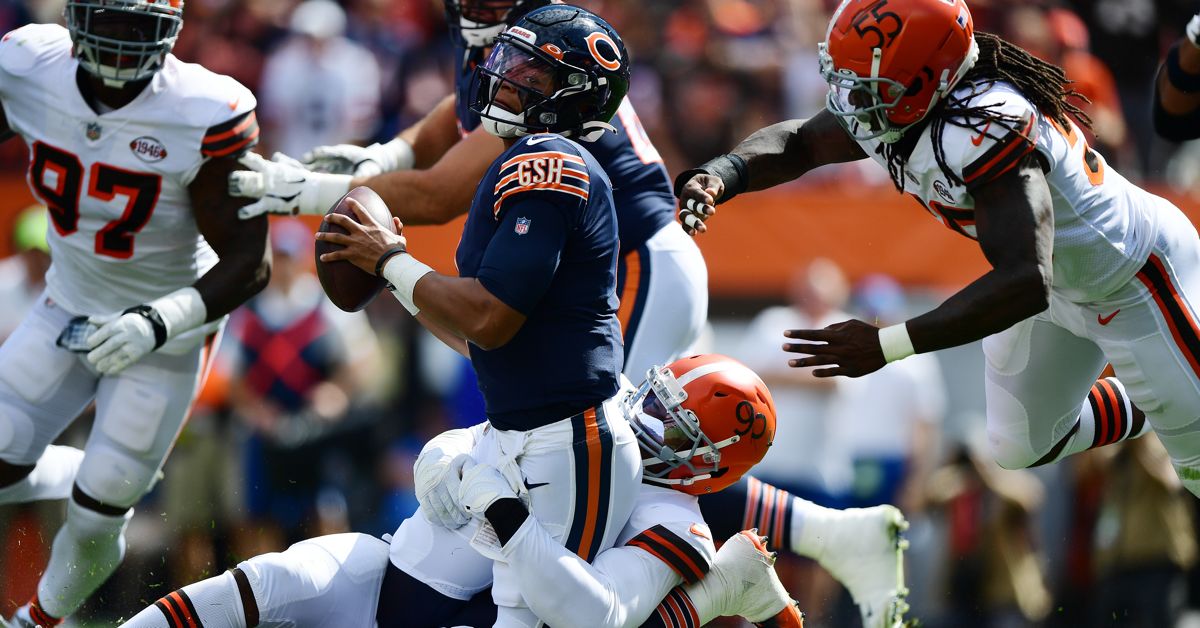 Stop me if you’ve heard this one before: The Bears were on the short end of the scoreboard — in this case, a 26-6 loss to the Browns — but it wasn’t on the rookie quarterback making his debut.

And that can’t be stressed enough.

It wasn’t Justin Fields’ fault. So do yourself a favor and look past the 6-for-20 effort as a passer. Pay no mind to the 68 passing yards. And don’t give that 41.3 passer rating a second thought. Instead, direct it all at the coach and general manager. Because this is the type of game that was lost last January, when management decided to keep the status quo because the team went on a heater against some bad teams down the stretch.

The offensive scheme mustered up just 47 total yards on 42 plays. That’s on Head Coach Matt Nagy. Fields was sacked 9 times and hit on 15 other occasions. That’s on Nagy for not designing things to neutralize a fearsome pass rush. It’s not like Myles Garrett and friends just showed up in Cleveland on Sunday morning. But it’s also on GM Ryan Pace for not making a more significant commitment toward building an offensive line. No matter if your QB is Fields, Nick Foles, or Andy Dalton, your offensive line play has to be better.

Myles Garrett just set a franchise record for sacks in a game with 4.5!

Garrett does that to a lot of guys. And, sure, Jason Peters looked good the first two weeks. But when given his most significant assignment to date, Peters looked every bit of a guy playing in his age-39 season. It served as a reminder that Pace had to bring in someone who was fishing when they came calling for offensive line help.

No Bears receiver had at least 50 yards receiving. Part of it is on Pace, whose group of pass-catchers beyond the guys at the top of the depth chart leave us wanting more. But it’s also on Nagy, who should know by now how to better use Allen Robinson II and Darnell Mooney within the confines of his offense. In the end, this team doesn’t have enough players who create separation — which is on Pace, for not building out that receivers room better with previous investments. And the lack of speed shows itself in his play designs and the execution of the plays — which is on Nagy.

Let’s keep it real. Your offense must squeeze out more than 1.1 yards per play. That ain’t it. If you’re the general manager, you’re probably thinking about how there are no more fall guys left for your head coach to blame. It’s not on Mitchell Trubisky failing to grow. Or Nick Foles not living up to impossibly high standards. And it’s not because the GM didn’t push hard to get a QB with the talent to elevate your scheme. But if you’re the head coach, how can you not look at the general manager’s inability to build an offensive line. Or worthwhile receiver corps. And in the end, it leaves Nagy and Pace pointing fingers at each other like the Spiderman meme. But that casting blame doesn’t put Justin Fields in a better position moving forward. And that leaves us in a scary space.

In the interest of fairness, I’ll be interested to see how Nagy responds to this moment because that was the most damning performance in a Bears coaching career going on four years.